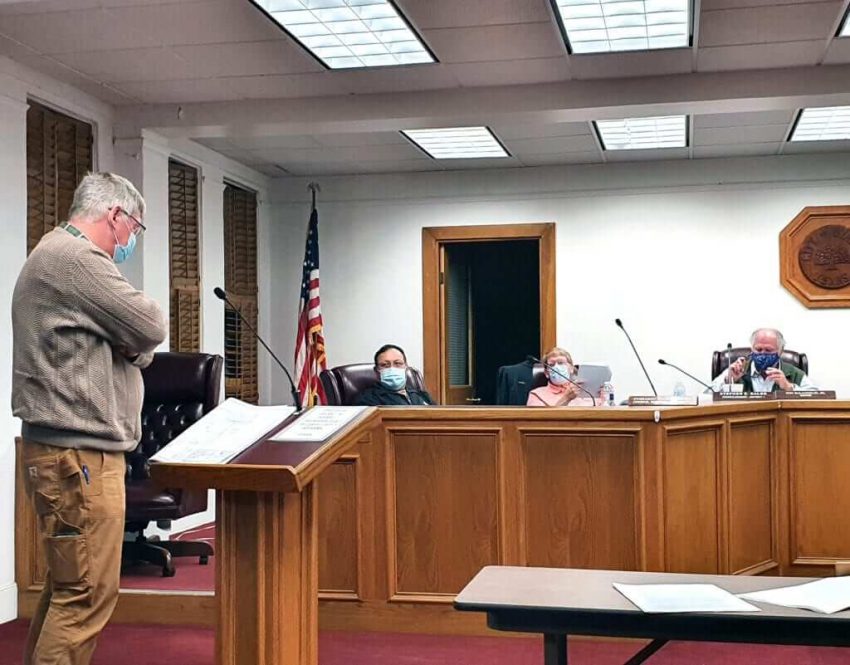 After a vehement discussion regarding a request to subdivide hotel/motel property located at 920 E. Main St., Uvalde City Council postponed decision on the issue, which was previously rejected by the city’s Planning and Zoning Commission.

Dirksen said Patel, who was not present, wants to subdivide a section of land into three lots to construct two separate lodging suites suitable for corporate rental.

The city’s Planning and Zoning Commission discussed the topic on Dec. 1 and ultimately denied the request.

P&Z members cited concerns about access to the property, which would have to be reached through the Days Inn or Motel 6 parking lot and does not have direct access to a city street or alley as specified by city ordinance.

“There are two easements, one is a utility easement that lines up with the alley that goes to Fourth Street. The alley is not cut all the way through. And then the access for the lots that are to be divided out is an easement that goes through the two hotels on the front,” said Susan Anderson, city director of planning and development.

Councilmen were informed by city staff that since the location is already zoned for hotels, the property owner can build the proposed suites. The problem is the subdivision request.

Asked if he wished to revoke the subdivision request and proceed with the development project, Dirksen said no, per the owners wishes.

Dirksen said they would also not accept a proposed solution of constructing an alley through the property to meet up with a city street and ceding such roadway to the city.

He said this was not workable  due to a water line in the area and concerns that would limit development by reducing available land.

“Right now the alley is a dead end, that’s the way it is and we’re not intending to change anything,” Dirksen said, noting they were asking for approval for subdivision with access through the two hotel lots.

Councilman Ernest W. “Chip” King III asked if the plan was to build homes, and Dirksen said no, rather separated hotel venues with more privacy.

King noted the issue came down to lack of access to a public right-of-way.

Dirksen cited Billy Bob’s Hamburgers as an example of a business accessed through a parking lot.

In rebuttal, city staff noted the large property houses multiple businesses, including the restaurant, and is owned by one entity. It is not subdivided.

Anderson also pointed out that the restaurant sits on street level, right off of U.S. Highway 90.

Dirksen then discussed Starbucks, noting that business is located on subdivided property, in a parking lot, and the business is accessed by easements.

City staff said all parties, including Starbucks, expected the drive-through to exit directly onto a public street, Country Club Lane, when paperwork was completed and approval was given.

Afterward, the Texas Department of Transportation stepped in and said the direct exit was too close to the intersection with U.S. Highway 90, and Starbucks had to alter their plans.

Referring to the hotel property at hand, Anderson said, “If you look at a Google map, you see a fence on the back. Behind it is a space that could connect up as an alley, all the way from Fifth Street to Fourth Street. They don’t want to do that.

Dirksen continued to refer to Billy Bobs and Starbucks, saying he was requesting the same situation.

City attorney Paul Tarski said, again, an alley could be constructed to satisfy the requirement, but Dirksen again argued that access through easements was workable, once again citing Starbucks.

“The ordinance is clear. You can dance on the head of this pin all you want,” Tarski said, noting the city council could overrule their own ordinance but would then be out of compliance with code.

“I think the biggest problem is subdividing. If you wouldn’t divide it and develop it as suites that are kind of sort of part of Days Inn, then you can access through the parking lot all day long,” King said. “I think that was the question for planning and zoning, and I kind of see why.

“Dividing the lots potentially puts it into a situation where maybe somebody is going to build a couple of houses over there and then we would really have a little problem. Then you gain access through the parking lot and what if the business was to say, ‘You can no longer gain access through my parking lot,’” King said.

The meeting began at 6:00 PM in the second-floor council chambers of city hall, and councilman Rogelio M. Muñoz was present via speakerphone.