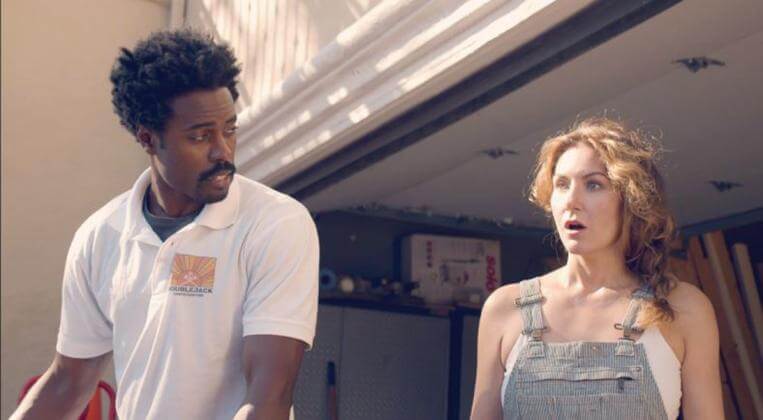 By Samuel Sutton at the Fredricksburg Standard Post, Jan. 27, 2021

The comedy series, broken into six episodes no more than 10 minutes long, shows audiences anything is possible through hard work and grit, something Stern knows well. Throughout her acting career, Stern always wanted to create a series of her own. She tried to pitch her ideas to several companies but never connected. “When I had these ideas and I’d have these meetings, and the doors were just closed,” Stern said. “People would say, ‘Well, yeah, this is good, but … whatever.’”

Stern remembers the moment she decided to create a vision and pursue it independently. “It was the turn of a year, I think I had an audition where it was another one of those where they were like, ‘Oh, it’s great, we’ll contact you,’ and they never did,” she said, laughing. “I was just like, ‘You know what? I’m done going through their hoops. I’m going to do this.’” She had begun working as an assistant to the late Lila Garrett, a former television screenwriter who was the mother of one of her friends. During that time, she began speaking to her about her dream of writing her own series.

“I showed Lila one of my other ideas and she said it was really good, but asked if I had something more lighthearted,” Stern said. She came up with this and Garrett loved it.

Stern began working with a crew that consisted of different actors and cinematographer than she has now. After the first day, she felt the project wasn’t going in the right direction. “It was horrible,” she said. “I got finished that night and thought, ‘This is so bad and I have to redo everything.’” She went back to the drawing board, rewrote the script, and hired a new cinematographer. She told her coordinator, Aldus Puyat, that she needed a “funny, African American guy who could sell a construction series.” She wanted the owner to be African American since she felt the industry always focused on having a white construction owner with Latino or ex-convict employees. She wanted to change that, and make it more relatable to what she knew. “My stepmother’s sister is married to a construction owner in Midland, and he’s African American, so I just felt like nobody ever talks about that,” she said.

Puyat told her about Willie Macc, who had begun to form an acting career of his own, starring in BET’s “College Hill: Virgin Island,” and appearing in shows like “CSI,” “Meet the Spartins” and others. “Really, I mean Willie Macc is the one who sells it,” she said. “I have such a great crew and cast of people around me and they’re the ones who did such a fabulous job to make it all happen.”

Stern remembers the successful first day working with this new cast and crew, and all the laughs and memories that came with it. “The first day we filmed the first and second episodes together in reverse,” she said. “It was wonderful how collaborative it was. We were having so much fun just cutting up and I thought, ‘This is a really great production.’” With her new team, Stern created the series, which instantly became a hit, winning 18 national and global awards.

“It’s a really amazing feeling to know that this little idea that I had, and this little chance that I took, has been so award-winning,” she said. “It’s just humbling.”

While she may be a success now, Stern will never forget her humble beginnings, performing “Snow White” and playing “Twinkle, Twinkle Little Star” on the violin at the Doss School Closings. Those first performances motivated her to become an actress.

“I remember hearing people laugh. I liked that, and I remember the applause, and I was just sunk,” she said. “To come from that little stage of the historical two-room schoolhouse in Doss, Texas, to Sony Pictures in Hollywood for the premiere of this series is so magical.”

To Gillespie County residents who are wanting to pursue a career in acting, screenwriting, or producing, she urged them to explore their creativity. “Structure an idea into some sort of a story and do it,” she said. “The new iPhone 12 is all about filming, every commercial is all about making videos, so now it’s so easy to do that.” She still encourages people to be professional but, emphasized nowadays, greatness can start with something so small as a phone camera and an idea.

To watch the series in its entirety, go to www.doublejackseries.com. See the original article: https://www.fredericksburgstandard.com/gillespie-life/small-stage-bright-lights