Kerrville PD warning of the rash of catalytic converter thefts 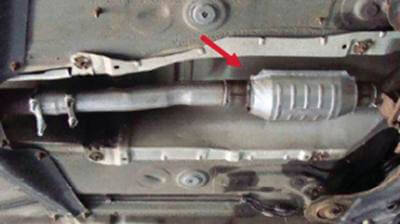 Kerrville Police Department (KPD) responded to several reported thefts and attempted thefts of catalytic converters between Jan. 3-18 from assorted locations inside the city limits, including commercial parking lots and private driveways. The vehicles targeted range from box and panel trucks such as those used for deliveries, to pickups and smaller SUVs. These thefts are currently under active investigation by the KPD Criminal Investigations Unit.

What Is a Catalytic Converter?

Catalytic converters are a component of your vehicle’s exhaust system. It’s a device that converts toxic chemicals produced by your vehicle into relatively harmless gasses before they are emitted into the atmosphere. Catalytic converters are located underneath vehicles in the center of the undercarriage. Traditionally, SUV’s and trucks have been targeted because their high clearance makes it easy for thieves to gain access. Thieves typically use a reciprocating saw, pipe cutter, or wrench to remove it, depending on whether the catalytic converter is bolted or welded in, and removal can take as little as one minute.

Catalytic converters contain precious metals like platinum, palladium, and rhodium. Thieves steal these devices and sell them to scrap yards or recycling centers, where they are later harvested for their precious metals at illegal processing facilities. The cost to replace a catalytic converter ranges between $500 and $4,000 depending on factors such as the type of vehicle you own and your insurance coverage.

If your catalytic converter is stolen, you should drive it straight to your preferred mechanic/muffler shop. You’ll notice a loud rumbling or roaring sound as soon as you turn on the engine which gets louder when you hit the gas. The exhaust is not working properly, so the vehicle also drives rougher than usual, often with a sense of sputtering as you change speed. Go to the back of the car and look underneath. The catalytic converter is a round canister that connects two pieces of piping in the exhaust. You will see a gaping space in the middle of your exhaust if the converter is missing, and you will likely see signs of the piping being cut away.

Always park in well-lit areas when possible. If you have a personal garage, keep your car in the garage with the door closed when the vehicle is not in use. Park close to a building entrance or to the nearest access road when parking in a public lot. This is due to the increased amount of pedestrian traffic in those areas. Security devices are available that attach to the converter, making it harder to steal. Having the converter welded in place also makes it more difficult to remove.

If you have a security system on your car, calibrate it so vibration sets it off. This ensures the alarm activates if a thief tries to saw off the converter. Video surveillance around your garage or driveway is also useful if you have the budget for it. Engrave your VIN number onto your catalytic converter to make it easier to identify in case it does get stolen.

Anyone with information regarding the identity of the persons responsible for these thefts is urged to call the Kerrville Police Department at 257-8181 or Kerr County Crime Stoppers at 896-TIPS (8477). Callers can remain anonymous and are eligible to receive a cash reward if the information given leads to an arrest or grand jury indictment of a felony offender.