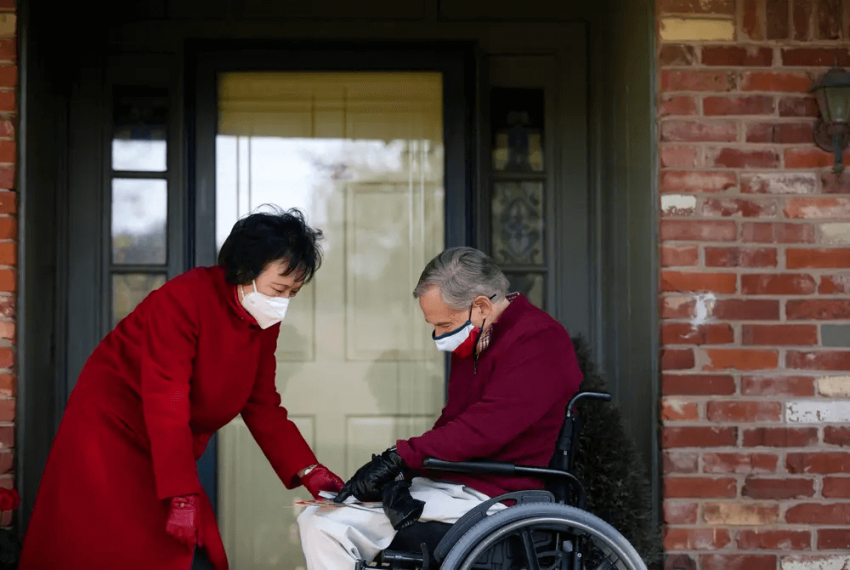 Several weeks ago, state Rep. Jon Rosenthal, a Houston Democrat in the midst of a tough reelection bid, made what he said was a “big decision” for his campaign.

He would resume door-knocking amid the coronavirus pandemic — but only by himself, no staffers or volunteers. He said he now hangs his campaign literature on a voter’s door, rings their doorbell and then “sprint[s] into the middle of their front yard” to ensure more than enough social distance.

“It gets me a few extra steps,” Rosenthal jokingly said in an interview. “I call it the candidate weight-loss plan.”

Rosenthal said he has gotten a positive reception on the whole, noting voters have been “cooped up” for months and eager to talk to anyone, even a politician they disagree with. But not all Democratic candidates have returned to door-knocking, fueling a noteworthy divide with less than two weeks left before a high-stakes Texas election.

Facing headwinds up and down the ballot in the state, Republicans believe one bright spot has been their candidates’ willingness to resume in-person campaigning earlier and more aggressively than their Democratic opposition. There are obvious risks as the coronavirus pandemic rages on — and Democrats believe they are being more responsible — but Republicans insist they are pressing a real advantage while still being mindful of a public health crisis.

“The biggest mistake the Democrats made — and they will rue this — is when they decided to become, to virtue signal, they weren’t gonna go door-to-door,” Dave Carney, Gov. Greg Abbott’s chief political adviser, said in a recent interview. “Generally the Democrats have been ahead of us — until the last couple cycles — of door-to-door contact, and empirically, beyond any shadow of doubt, it’s the most effective way to communicate to voters, to engage voters, to get their commitment.”

Carney said that every GOP campaign is door-knocking in the 24 battleground state House races that Abbott’s political operation is targeting. A spokesperson for the Texas GOP said the party has “mobilized volunteers across the state knocking doors in target House races, and almost every campaign has supporters pounding the pavement.”

On Thursday, Abbott himself made a show of visiting Benbrook, a Fort Worth suburb, to go door-knocking with state Rep. Craig Goldman in his hotly contested reelection bid. On Saturday, he joined another endangered House member, Rep. Angie Chen Button of Richardson, in her district for a block walk.

“Looking someone in the eye and asking for their support is a very, very powerful thing — and I think it’s a huge advantage for Republicans right now,” state Rep. Dade Phelan, R-Beaumont, said last month.

While some Democratic candidates — like Rosenthal — have resumed door-knocking on a limited basis in recent weeks, Democrats are holding firm on being far more cautious in general than Republicans are when it comes to in-person campaigning.

“If it’s not safe to trick or treat, it’s still not safe to go knock on a stranger’s door and ask for their vote,” Celia Israel, chairwoman of the Texas House Democratic Committee, told reporters Wednesday.

Ahead of Halloween, the Centers for Disease Control and Prevention has asked Americans to avoid “higher-risk activities” including “traditional trick-or-treating where treats are handed to children who go door to door.” But Shelley Payne, director of the University of Texas at Austin’s LaMontagne Center for Infectious Disease, said in an email that political “door knocking can be done safely, if the appropriate precautions are taken.”

“The person should wear a mask and step back at least 6 feet after knocking,” she wrote. “A short conversation with social distancing, particularly if the campaigner is outdoors, should not present a significant risk.”

Rather than campaign in-person, Democrats have been more focused on “contactless lit drop” — delivering flyers to voters’ doors without seeking an in-person interaction — and calling and texting voters. They argue they are reaching more voters those ways, anyway, and they scoff that Republicans are straining for any advantage they can pitch in a tough environment.

Plus, Democrats are glad to have the broader debate over which party has been more careful in responding to the pandemic.

“It is clear that Republicans have not taken COVID seriously since Day 1, and there is a clear contrast between Republicans and Democrats on the issue,” said Andrew Reagan, executive director of the House Democratic Campaign Committee. “Democrats are following science and looking out for the best interests of all Texans.”

It is not just the state House battle where the debate over in-person campaigning is raging. Across Texas’ battleground U.S. House races, the way that candidates are conducting their campaigns amid the pandemic has emerged as a top issue in some cases.

In the fight for Texas’ 23rd Congressional District, where Rep. Will Hurd, R-Helotes, is retiring, GOP nominee Tony Gonzales has hounded Democratic rival Gina Ortiz Jones for not stumping in-person as much as him, arguing the district will need more than a “virtual representative.” During a debate earlier this month, Jones said her “last in-person event was in March” and argued she “will always prioritize the health of voters here, unlike my opponent.”

The contrast has come to a head in some striking ways. Take for example the first televised debate between U.S. Rep. Chip Roy, R-Austin, and his Democratic opponent, Wendy Davis. Roy appeared in the TV studio in San Antonio, while Davis participated virtually from her home in Austin.

“You’ve probably noticed that Congressman Roy and I are not in the same location because Congressman Roy chose to appear at the debate site and I did not,” Davis told viewers in her opening statement. “Those choices exemplify the differences that we offer you in our ability to lead this community through the pandemic and beyond.”

As for voter contact, Davis said in a recent Texas Tribune interview that her campaign is “not door-knocking, but we are lit dropping all over the district.”

It’s a similar story in the U.S. Senate race. While Democratic nominee MJ Hegar has ramped up in-person events lately — albeit small, low-key appearances not meant to draw crowds — her campaign’s voter contact remains virtual, with contactless lit drop. The campaign of the Republican incumbent, John Cornyn, is door-knocking in partnership with the state GOP.

Still, the state House contests are where in-person campaigning is generating the most discussion.

One Republican candidate who has gone all in on door-knocking is Will Douglas, who is running against state Rep. Rhetta Andrews Bowers, D-Garland. Douglas’ social media accounts are filled with photos of him posing with groups of block walkers, often with a mask on or pulled down under his chin.

Douglas said his campaign has knocked on over 46,639 doors since Aug. 3.

“As a candidate for public office, it’s my duty to show up and hear directly from all Texans,” Douglas said in a statement. “I’m meeting with voters at the doors or at the polls every day from 7am to 7pm, and it’s going to take someone willing to put in that hard work to get our state back on track.”

As for Rosenthal, he said he felt “strongly that the way I won this seat was by being in-person in people’s neighborhoods, knocking on their doors and talking to them where they are.” He acknowledged, though, that the in-person route may not be for everyone at this moment.

“I think it’s gonna be different for different people,” he said, “depending on their personal level of comfort and how they feel their district would react.”