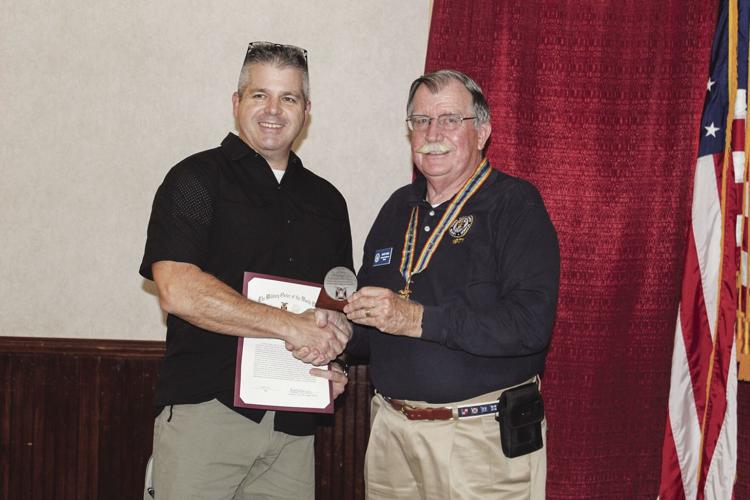 By Bonnie Arnold at the Hill Country Community Journal, September 19, 2020

An overview of the nation’s five military service academies and how best to seek admission was the topic of a dinner program last week for the Military Order of the World Wars, Hill Country Chapter.

Special guests at the MOWW dinner and program were five Kerrville area high school students who are applying, or plan to apply to attend their choice of those academies.

Moderator for the presenters was Col. Norm Wells, ret., commander of this MOWW chapter and a 1963 graduate of the Air Force Academy.

He spoke to the candidates in the room about how to be successful those steps, and about “academy prep schools” one sometimes can or must attend to ultimately enter a service academy (as he did to get into the AFA). Three are academy-connected plus other private ones.

“The advantage of an academy education is, first, that it is an great education; there are no tuition costs; cadets have complete medical and dental health coverage, probably the biggest advantage; there’s a monthly stipend or salary that increases as one advances; and every graduate has a guaranteed career,” Ramos said.

He said Merchant Marine cadets spend a year at sea on a ship for on-board experience; and that when he graduated at the Air Force Academy, he was one of about 85 new lieutenants.

He said in his training and experience, all instructors are there to teach, not to do research.

“The academy mission is to educate, train and inspire men and women to become leaders of character, motivated to “lead in service to the nation,” to become a military officer. I speak only for the Air Force Academy, but I expect it’s similar across them all. It’s funded by the government and all graduates become officers.”

About athletics, Ramos said, “They say at the Air Force Academy that ‘every cadet is an athlete.’ Physical fitness is very important, and includes intercollegiate, intramural and club sports, and physical education. Some are recruited as ‘athletes’ but all participate in something.”

“There are summer breaks, but there also is summer training with service units and ships. And upperclassmen practice leadership every day beginning with their sophomore year,” Ramos said. “The goal is to ‘grow’ officers.”

Applicants must be at least 17 years old but not past their 23rd birthday by July 1 of the year they enter the academy; a United States citizen; of good moral character; have a valid Social Security number; and (“the biggest obstacle for many”) unmarried and not pregnant with no dependents.

The Honor Code at the AFA states, “We will not lie, cheat or steal, nor tolerate among us anyone who does.” Ramos said it is taken very seriously by all, because subordinates must have trust in their superior cadets and classmates.

Ramos said every applicant (except for the Coast Guard Academy) must receive a nomination from their U.S. Congressman or Senator, for Kerrville area applicants, from Cong. Chip Roy or Senators Ted Cruz or John Cornyn, the U.S. Vice President, ROTC or JROTC. For children of military personnel, there are multiple categories and they should check the criteria.

Congressional nominations aren’t required for the Coast Guard Academy; applicants apply directly to that one and the deadline is Jan. 15.

The nomination requirement is separate from the application process, he said, and both must be completed.

Ramos advised students to apply to all of the service academies, not just the one they each have picked as first choice.

Ramos said there are usually summer seminars at service academies for those heading into their senior year, a chance to live like a cadet or midshipman for a week and live in a dorm, eat in a dining hall, and explore academic facilities and research labs.

“It’s a chance to ask, ‘Is this something I can do for the next four years?’,” he said.

This costs about $300-550 plus transportation, he said, out of the student’s pocket; and some applications for the seminars open in December and close in January. Students have to check dates for their preferred academies.

But these seminars are not prerequisites for admission to an academy, he said.

Application requirements include, to receive a nomination if required; write essays; get letters of recommendation, teachers’ evaluations, and high school and college transcripts; take the SAT and ACT tests and get scores; take a physical fitness test and pass a medical exam.

Ramos said that last item could take four months if the student needs a waiver.

Each also must be qualified for a security clearance; and be interviewed.

Most academies require a security clearance gained through a complete and extensive questionnaire; and Ramos said federal investigators will do a full background investigation.

“You will probably be interviewed by someone on the admissions staff. Be truthful and honest on your application.”

For high school juniors, Ramos said by December, juniors should take the SAT and/or ACT early and often; then send the highest score. Check deadlines and apply for summer seminars in the winter. And in the spring send complete preliminary applications and start seeking nominations.

For high school senior and graduates, he said the earlier they start, the better, by starting or continuing applications to send and nominations to gain; keep taking the ACT and SAT in the summer and fall; meet October deadlines for Congressional nominations; and meet the December/January deadlines for completed applications.

Anne Overby outlined Cong. Roy’s nomination processes, including application via his website; the Oct. 11 deadline; and to submit a photo, resume, essay on why they student wants to attend an academy, letters of recommendation, transcripts, and SAT/ACT scores.

Roy’s application period is May1 to Oct. 11.

“Your best recommendations should be from those who are not related to you, but someone that knows you the best,” Overby said. “By law every Congressman’s office can make 10 nominations per academy.” She called them “competitive nominations.”

The interview is with a panel of military officers, in early December in San Antonio, she said, adding “Our board interviews every person who applies.”

Cong. Roy’s nominations will be made by December, “irrespective of the election results,” she said. “Cong. Roy is congressman until the end of December in any case.”

His 10 nominees will be forwarded to each academy.

Ramos returned to the video screen to give additional tips: start early; don’t miss a deadline; study for and take the SAT and ACT multiple times; get great grades; demonstrate leadership; practice for the physical fitness test (he noted the AF Academy is at 7,000 feet and it’s hard to acclimate there); and “motivation is essential.” He added, “But have a little fun in high school, too.”

Admission personnel are looking for “the whole person,” he said. “Start that habit now. They want well-rounded applicants in their chosen organization who will rise up to leadership roles.”

Appointments are offered each April.

He said basic training is difficult, including emotionally; and homesickness is a real thing. And he said appointments are offered “conditionally” so successful applicants must keep themselves out of trouble from appointment on. He said applicants should have a back-up plan that shows a path to his or her goal; and ROTC is a good option. Attend an academy prep school, and reapply to the academies the next year.

Deville told attendees that SU has Air Force ROTC and they are working on one for the Army; plus they have connections to training at UT-San Antonio.

“There’s probably ROTC money available if you miss the cut for an academy,” he said, “and leadership roles are available for students here and nearby.”

He gave contact phone numbers for the SU program (792-7492 and 792-7495), and an email address, schreinerinstitute@schreiner.edu. He is a USMC veteran.

Tropical Storm Beta brings flood risk to Texas and the Gulf CoastTexas needs more poll workers this year; here's how to become one.