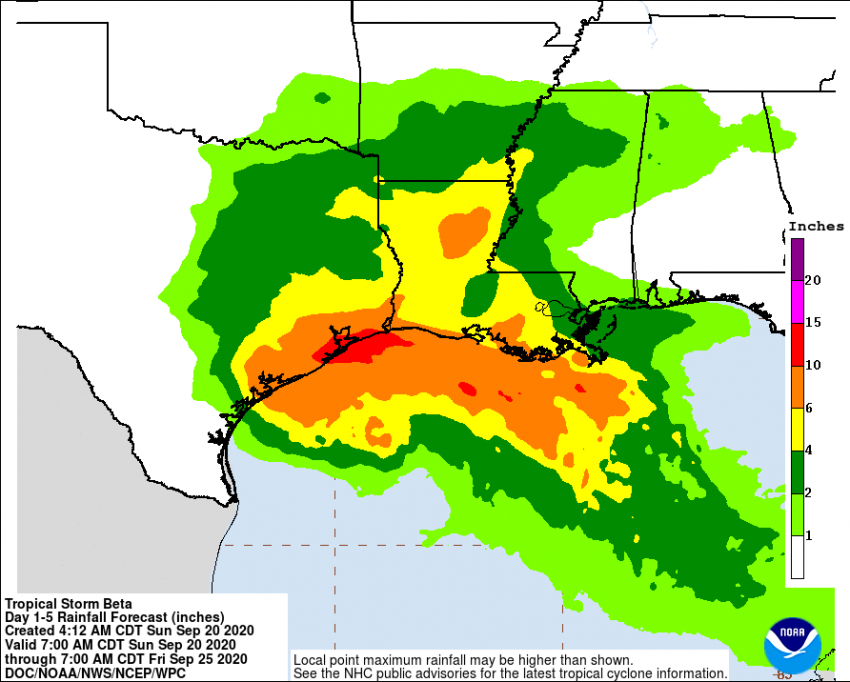 Cover image by the NOAA

Monday will bring the first effects of Tropical Storm Beta to the U.S. in the shape of heavy rain moving into the state of Texas. There will be some chances of severe weather along the Texas coast where Beta is expected to focus the majority of its fury as it moves slowly towards hurricane strength. The majority of the rest of the nation will see little change in conditions with a few pop-up afternoon storms moving into Florida on Monday afternoon. Across the U.S., the West Coast will continue to see problems with wildfires moving through the state as sunshine and warm temperatures remain the norm across California.

The arrival of Tropical Storm Beta on the Gulf Coast will bring with it more rain and flood risks for Texas, Louisiana, and Mississippi. The storm has been slowly moving through the Gulf of Mexico growing in power and ferocity as it moves towards the Gulf Coast of the U.S. The coastal regions of Texas and Louisiana have already faced flood risks in August and early September with more possible as Beta moves inland somewhere between Eastern Texas and Louisiana. Several tropical storm and flooding warnings will be seen along the Gulf Coast with heavy rain expected to move across central Texas into the southern portion of Oklahoma. The impact of thunderstorms will be focused on Houston where the afternoon temperature will climb to 75 and Dallas where a day of rain will see temperatures climb to just 67.

There will be little unsettled weather seen in the eastern third of the U.S. where the afternoon will be marked by sunny skies and warming air following the blast of cold air moving into the area over the weekend. The cooler air will see temperatures stall over the day with Raleigh, North Carolina climbing to a temperature of 68 and New York reaching 65 on the last day of Summer 2020. Warmer air will begin to push across the U.S. with the Midwest seeing temperatures climb into the upper-70s in Minneapolis and Chicago.

Tuesday is the first day of Fall and will bring another day of concern for the Deep South as Tropical Storm Beta continues to move into the Gulf Coast. The impacts of Tropical Storm Beta will be felt as far to the north as the southern portions of Kansas and Missouri.