Texas needs more poll workers this year; here’s how to become one. 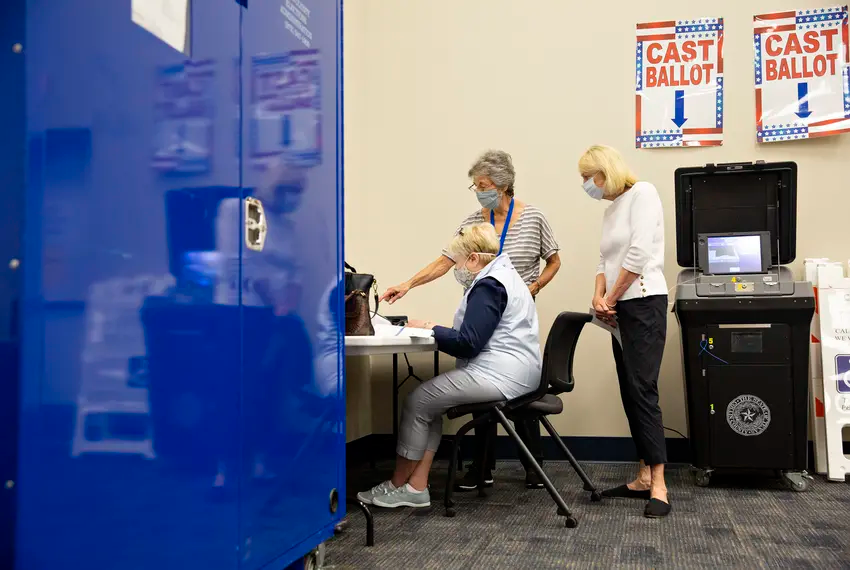 By Catherine DeLaura at the Texas Tribune, September 21, 2020

Kathy Schneider worked as a Dallas County election clerk in 2018, but out of concern about the coronavirus, she’s choosing not to this year.

“I am 64 and really not interested in exposing myself to coronavirus any more than I need to do,” Schneider said.

Instead, she’s volunteering as a poll watcher for the Democratic party, which she can do outdoors and distanced in a parking lot.

Historically, elections have been staffed by older retirees, a demographic that is particularly vulnerable to the coronavirus. A lack of people willing to work because of the pandemic caused some Texas’ counties to close down polling locations during the July primary runoffs. And some officials are concerned that could happen again this fall.

What does an election worker do?

Poll workers do far more than just check IDs and assist with voter equipment. They work long hours setting up polling stations and securing them after closing each night. Bilingual election clerks serve as translators for voters who need assistance. Election clerks also drive materials to and from polling locations; process ballots, equipment and paperwork; and answer questions voters might have.

Counties are also trying to provide more ways for voters to drop off mail-in ballots. For this election, absentee voters can drop off their ballots in person at their county elections offices as soon as they’re completed. And many counties are opening drive-thru ballot drop-offs. For both options, voters should be prepared to show their IDs.

“It takes some of the pressure off the post office and makes voters feel more comfortable that they’re going to have their ballot arrive timely and be tallied,” said Dana DeBeauvoir, the Travis County clerk, whose office has opened three drive-thru options.

Who can serve as an election worker?

“At this point, if you call and say you’re interested in working, we’re hiring you, as long as you meet the requirements,” said Yvonne Ramon, elections administrator in Hidalgo County. “We won’t know [our final needs] until the polls actually open.”

To be an election worker, you need to be 18 years old and registered to vote in the county you wish to work in. The only exception is for teenagers participating in the Student Election Clerk program. Elected officials, candidates, and people related to or employed by a candidate are not allowed to work in an election.

Nicholas Miller won’t be 18 in time to vote in the November election, but since 2019, he’s been working as an election clerk. For him, it’s a way to contribute to the democratic process.

The student program allows high schoolers who are 16 or older to work as election clerks at polling locations throughout early voting or on Election Day.

“I want to [work] this November because I feel like I have a bit of a duty to do it,” Miller said. “I certainly would not want COVID-19, but if I got it versus a poll worker in her 70s got it, it would be a big difference in how it shook out.”

Plus, he says, it’s actually a lot of fun.

Will I be paid to do this work?

Yes. Election workers are paid hourly for the days they work during the election. Counties set their own wages for their election workers, but they have to pay at least the federal minimum wage. However, many counties pay anywhere from $10 to $14 an hour depending on the role.

Election workers should be prepared for long days. At a maximum, you can expect to work a 14-hour shift. However, some counties will accept part-time workers, so make sure to check in with your county about its requirements.

What training do I need?

Training happens at the county level ahead of the start of early voting and Election Day.

How can I apply to be an election worker?

Replacing retired U.S. military officersVan Morrison singing about how he is no fan of virus lockdowns