Preserving the charm of Fredericksburg 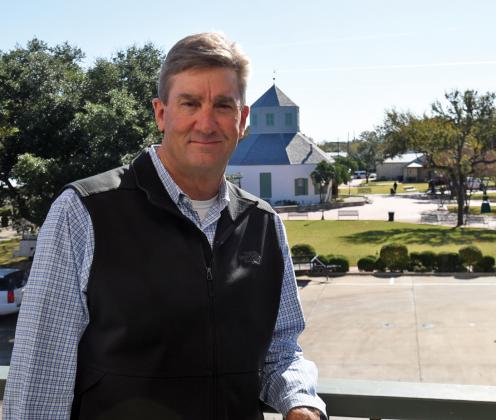 By Samuel Sutton at the Fredericksburg Standard, November 4, 2020

Brian Jordan, a hometown boy and the City of Fredericksburg’s Development Services director, will be retiring after 20 years with the city in January.

Since moving back to town for this position after working as a senior planner in the Dallas-Fort Worth area for 12 years, Jordan has overseen the behind-the-scenes factors shaping this city, such as zoning, code enforcement, and historic preservation, to name a few.

While these may often go unnoticed, the way they are managed makes a difference between a quaint, charming town like Fredericksburg and towns with poor infrastructure, businesses creeping into neighborhoods, and run-down landmarks.

Jordan said coming here was not only an opportunity to be close to his family but a chance to use his experience he earned from college and working in urban areas to help “chart the waters” for the future of his hometown.

A few examples of how he’s helped shape the city is by working to establish a Standardized Business or a “Chains on Main” Ordinance, and by regularly making updates to ordinances related to keeping them relevant. Jordan said his proudest adoption was that of the Comprehensive Plan in 2006.

“We wanted to discern how the community wanted to grow, what they wanted to see as priorities and what kind of things that they think that the future of this community would bring,” he said.

His coworkers, City Manager Kent Myers and Historic Preservation Officer Anna Hudson, say it’s going to be tough to replace someone with as much passion as he’s had for shaping this community.

“It’s going to take just the right fit,” Myers said. “He’s always been very passionate and I think that’s because he grew up here. He wants this community to be a great place to raise a family like it was when he was growing up.”

Hudson, who Jordan hired over four years ago, has been able to see just how much of a vested interest Jordan has in shaping Fredericksburg, as he has been mentoring her during much of her time here. She said he does things leaders from outside the community don’t.

“He gets up extra early and, on his way to work, he always makes it a point to drive around and kind of look at things and see what’s really going on,” Hudson said. “He’s literally kept an eye on town for 20 years.”

For Jordan, this routine keeps him from becoming caught up sitting in his office and working just on the day-to-day activities. During this daily drive, he gets to look at what phases each approved project is in.

“I do this so I can kind of get a feel of what I think is maybe something good that we did, or something that we maybe should have done differently,” Jordan said.

Another reason he does this is because it gives him a chance to feel the charm of the community.

“It’s really easy for us as administrators and regulators to just sit back here and say, ‘no, yes, no, yes.’ That’s not fulfilling at all,” Jordan said. “But when you drive around, whether it’s with your wife, or your girlfriend or your family, you just drive down the street and think, ‘this is just really nice.’”

Come Jan. 29, 2021, Jordan’s time serving as the primary developer of this community will end. This means someone new, and likely not a local will take on the position. Jordan offered some advice to the unknown newcomer, saying it will be important for them to clearly understand the dynamics and the makeup of the community from a residential, political, and business standpoint.

“The decisions they make in the future need to be sound, judgment calls based on decisions made by our forefathers,” Jordan said.

He recognizes the next generation will be completely different than his, but said it’s still important not to lose sight of the small-town principles.

Jordan said while he’s excited to be able spend time with his family and regroup, his plans for the future are still to be determined.

“I feel relatively certain that it’s not going to be anything related to city business, or city planning, or consulting or anything like that,” he said. “I think it’s going to be something completely separate.”

Jordan said he also hopes to check some experiences off his bucket list, such as hitting the links at some historic golf venues, hunt in some exotic places, and travel with his wife. He said he has no plans to move anywhere. And, if he can support the community in a way with no political conflict, he’d be happy to do it.

Myers said the city has closed the application process for Jordan’s position, which had about 20 people apply, most of which are from Texas. They will screen applicants beginning this week and plan to start interviews around Thanksgiving.