Bandera prepares to honor its heroes 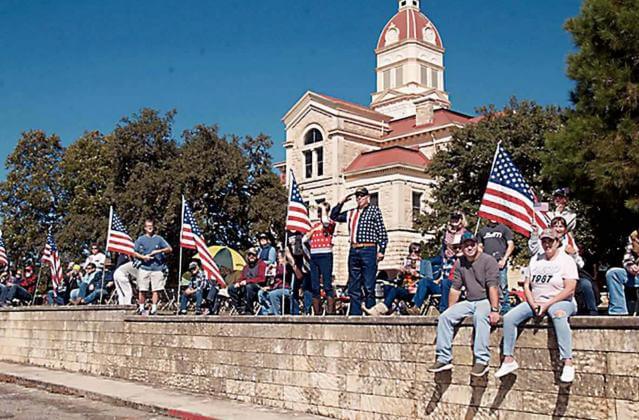 By Susan Junker for the Bandera Bulletin, November 4, 2020

The 19th annual Bandera Honors Veterans event is set to take place this Saturday at the Bandera County Courthouse beginning at 9:30 AM, albeit with some notable changes.

It will be Bandera’s first parade since Mardi Gras in February.

“We are all overdue for a parade demonstrating patriotism and pride,” remarked Dennis Birchall, American Legion Post 157 Parade Chairman.

In a departure from previ ous years’ celebrations, the arrangement of participants on the front courthouse lawn has been modified to allow more room for onlookers along the parade route, reduce congestion along sidewalks and increase safety for those riding on the veterans float.

Birchall expressed his gratitude to the Bandera mayor, city manager, and marshal for their assistance in developing a new safety plan and processing it with TxDot. Saturday’s proceedings will start with the presentation of new and expanded family display tables showcasing stories from people like the Burkes family, who are setting up three tables this year to highlight the contributions of their seven sons who served in the military. Other agencies and nonprofits will have booths providing information for veterans and their families.

At 10:30 AM, the honors program will commence with remarks by County Judge Richard Evans.

The event will also feature speeches and prayers from veterans, including keynote speaker Ret. Sergeant Scott Gossett, an Army veteran and Purple Heart recipient who served in Iraq and Afghanistan. Speakers will be inter Speakers will be interspersed with music provided by the San Antonio Pipes and Drums as well as several solo artists. VIP seating for World War II and Korean War veterans will be placed near the front entrance of the courthouse, which is located at 500 Main St. Blankets will be provided as needed. A parade featuring a special float for veterans and Bandera High school band and cheerleaders will begin at noon starting at Bandera City Park, completing the circuit by way of Main Street.

Following the parade, Sid Gibson, Marine Corps veteran and restauranteur, and his family will serve a free barbecue luncheon for veterans and their spouses on the courthouse lawn by Hackberry Street.

Parade entrants and display booths are still being accepted; call Dennis at 210-788-9163 or email amlegion157@live.com.

Bandera honors veterans is hosted by American Legion Post 157, which is celebrating its 100th anniversary this year.