Maloney was sworn in as Kerrville FD Chief 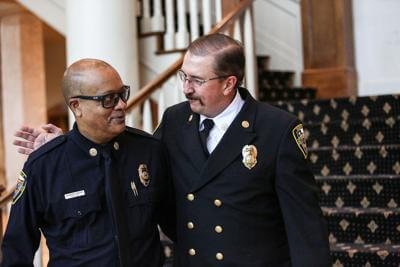 By Tammy Prout at the Hill Country Community Journal, November 4, 2020

Kerrville Fire Department’s Eric Maloney has had a perpetual smile on his face since learning that he had been selected to promote to the top rank within the department, a position he has worked diligently toward earning since he was hired as a firefighter in May of 1997.

“I’m honored to stand before you, my friends, by brothers in Christ, my family and my fire family as the Kerrville Fire Chief,” Maloney said after taking the oath of office. “I am humbled by the opportunity to serve the community in the department I cherish and love.”

“Fire family” is a term Maloney uses often and with pride to describe the men and women of the KFD, who live and work together a third of their lives for 24-hour periods.

“We moved here when I was in fourth grade. I grew up here. I graduated from Tivy High School and it means so much to me to be serving as fire chief in my hometown,” Maloney said.

Maloney said he only ever wanted to work for the KFD and was going to serve until his retirement in whatever capacity he was needed.

“I love my job … at every level I’ve worked, I’ve loved it,” Maloney said. “So, this is just a humbling experience for me to be chief of this department.”

By his nature, Maloney is driven to succeed, holding himself to a higher standard of learning and self-improvement.

Over his 23-year career with the KFD, Maloney has earned a Master Firefighter certification and is a Fire Service Instructor II, Department of State Health Services Basic Coordinator & Licensed Paramedic, and American Heart Association instructor in multiple disciplines. He graduated from the Texas Fire Chief’s Academy, earned an Associate of Applied Science in Emergency Medical Services, a Bachelor of Science in Emergency Health Sciences from the University of Texas Health Science Center at San Antonio and a Master of Public Administration with a concentration in Disaster & Emergency Management from Sam Houston State University. During his career, he served on the Technical Rescue Team and the Critical Incident Stress Management team.

But, while he has had great success within the KFD, his career path wasn’t always so certain.

After graduating high school in 1987, Maloney worked with his father and then became a scuba diver instructor and was teaching basic life support classes.

“I just didn’t have enough knowledge,” Maloney said. “My uncle worked for EMS here back in 1978, so I reached out to him. He talked me into the EMT program and I loved it.”

Maloney then became a paramedic and volunteered in Kendall County as a paramedic on the ambulance, but wanted expand his career to include emergency care.

“I grew up around the KFD. My best friend’s dad was the Assistant Fire Chief here, Raymond Tennison,” Maloney said. “It was Chief Tennison who suggested I attend the fire academy.”

“I spoke to Chief Tennison in December and I was enrolled in the fire academy less than a month later,” Maloney said.

Upon graduation from the academy, Maloney said KFD did not have an opening at the time, so he applied to San Antonio Fire Department and in Plano.

“I was a little frustrated, not wanting to move so far way,” Maloney said. “While I was trying to figure out what I was going to do, an opening at KFD became available. I tested and interviewed and was hired. It couldn’t have worked out better.”

In 2004, Maloney was promoted to Emergency Medical Services Coordinator, while still attending school.

In 2009, Maloney was named Texas Department of Health & Human Services “EMS Administrator of the Year” for his efforts in creating and implementing a 22-step program to improve the department’s EMS efforts.

In 2015, Maloney promoted to the rank of Division Chief and two years ago was named KFD Deputy Chief, a position he held until last week when he was named to the department’s top spot.

During his tenure, Maloney has worked under three different fire chiefs, with each one teaching him valuable leadership tools.

“Each of them was unique in their own way, with different strengths and goals,” Maloney said. “They have led the way for this department and have paved a path for future success. I hope to take what I’ve learned from each of them in a direction that will allow this department to continue to adapt and grow.”

Of his most recent boss, Maloney said he is most grateful.

“Chief Smith was a great mentor for me,” Maloney said. “He believed in opening up opportunities among the ranks and encouraged us all to continue to learn and improve.”

As the KFD’s newest chief, Maloney said he plans to combine his love of the community and pride in the department in an effort to personalize his leadership.

“The first thing I wanted to do is meet with every single member of our department,” Maloney said. “I’ve gone to every station, during every shift. I’ve been able to speak to all but a very few of them so far. I want them to know that I’m here for them and that my goal is for us to continue to provide the high level of professional service expected of them with a focus on community.”

Being a licensed paramedic and coming from the EMS side of the department, Maloney said he feels his strengths will be unique, stating that he has already developed a work-flow chart, dissecting the department from within to define each division’s function.

“I’ve had great feedback from the group,” Maloney said. “I believe we are much smarter as a group than we are individually.”

Also unique to Maloney serving as KFD chief is the fact that he has served his entire career with the department, coming up among the ranks with many firefighters and officers still working at the department.

“We are a family,” Maloney said. “And as such, we are part of a bigger family, which is this community. This is what I plan to emphasize as the leader of this department.”

The focus on family comes easy for Maloney, who cherishes a close relationship with his parents and sister, while also making sure his wife, Alexis and children Peyton, 15, and Abigayle, 12, know that they are his top priority.

“I try to not miss any opportunity to be with my kids. You can’t get that missed time back,” Maloney said. “And, my wife is not only my best friend, she is my rock.”