Oil and gas cleanups throughout Texas are on Biden’s agenda. 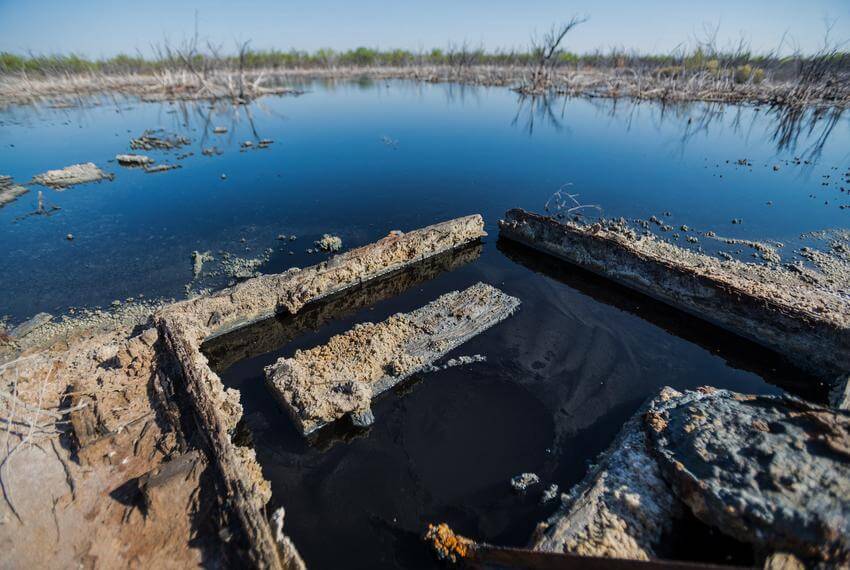 In East Austin, one plot of land near a decommissioned natural gas and oil-fired power plant now produces fruits and vegetables in a community garden. In South Houston, land that was contaminated by an old landfill will soon be occupied by a commercial solar farm.

Based on his recent executive order on climate, President Joe Biden wants to see more projects like these that combine efforts to reduce greenhouse gas emissions with jobs cleaning up contaminated sites that are disproportionately located in communities of color.

In Texas, the president’s directive to prioritize such projects could present opportunities for neighborhoods that have been left with the toxic legacies of the early days of the oil, gas, and chemical industries. According to the Environmental Protection Agency, Texas has 69 Superfund sites, which are extremely toxic sites the federal government has prioritized for cleanup. The state also has several recently mothballed natural gas plants and thousands of old and abandoned oil and gas wells.

The president’s order, in part, makes revitalizing “energy communities” an official policy of his administration and aims to reduce methane emissions, oil and brine leaks, and other environmental harms from former mining and oil and gas drilling sites.

“Such work should include efforts to turn properties idled in these communities into new hubs for the growth of our economy,” Biden’s order said. It directs a slew of federal agencies to identify and coordinate federal resources to revitalize the economies of communities where coal, oil and gas and power plants provided jobs for decades, but now have either shuttered or could soon be jeopardized by a transition to low-carbon energy sources.

But Biden’s vision is at odds with Republican leadership in Texas. Gov. Greg Abbott and the state’s GOP members of Congress have mostly criticized it for prioritizing renewable energy sources over the oil industry, which remains a pillar of the state’s economy.

“Texas is not going to stand idly by and watch the Biden administration kill jobs in Midland, in Odessa or any other place across the entire region,” Abbott said last week during a visit to the Permian Basin, one of the most productive oil fields in the world. He signed his own executive order that directs state agencies to “use all lawful powers and tools to challenge any federal action” that threatens the energy sector in Texas.

Biden’s directive to find ways for energy workers to contribute to the nation’s climate goals is a recognition that some of his environmental policies will cost jobs in the fossil fuel industry, said Michael Drysdale, an environmental attorney at Dorsey & Whitney, a national law firm based in Minneapolis.

“You’ve got to offer something in response” to potential job losses, Drysdale said. The programs to clean up contaminated sites are likely to be “bottom-driven” by neighborhoods and local governments, he said, and so the state could be a big player in helping to promote local applications to the federal government.

In a statement, Gary Rasp, spokesperson for the Texas Commission on Environmental Quality, said the agency frequently partners with the EPA for projects to remediate contaminated sites.

And Andrew Keese, a spokesperson for the Texas Railroad Commission, which regulates the oil and gas industry, said in a statement that if additional federal funding becomes available for oil and gas cleanup initiatives, “the RRC would certainly review the details for such assistance and make decisions that are best for all Texans.”

“The response from the governor is going to be quite different than the mayor of Austin,” said Stephanie Sebor, an environmental lawyer at Winston & Strawn who has practiced in Texas. “Governors might be resisting, but specific communities could liaison with the federal government to bring stimulus to their specific neighborhoods.”

Several coal-fired power plants in Texas have been mothballed in recent years as the fracking boom produced cheap natural gas and wind power surged. Those shutdowns have left an economic void in some areas: In Freestone County south of Dallas, hundreds of people were laid off when the Big Brown power plant shuttered in 2018.

“I think that what (the Biden Administration) is trying to do is move these communities toward what the administration considers a more sustainable energy future,” Sebor said. “I see plenty of opportunities there coming to Texas.”

Others, though, doubt cleanups and remediation will provide significant work in Texas. Mike Nasi, an environmental and energy attorney for Jackson Walker, a Texas-based law firm, said that unlike Kentucky or West Virginia, Texas doesn’t have many abandoned coal mines that would be ripe for cleanup work. And he said the state’s existing programs to remediate environmental contamination across the state have been successful.

“I’m a pretty half-full guy, but I don’t see the bulk of the work that they might do,” Nasi said. “I’m skeptical that it’s a huge area of economic opportunity [in Texas].”

Others, though, said abandoned oil and gas wells could offer a prime opportunity for cleanup in Texas. Many oil wells drilled by early Texas wildcatters were never mapped or documented in state records, researchers say. Today, as many as a million of these “orphan” wells — which can emit methane, a potent greenhouse gas — are scattered across the nation, some experts estimate.

“We don’t know how likely (orphaned wells) are to cause groundwater pollution or how much methane they emit,” said Daniel Raimi, a senior research associate at Resources for the Future, a nonprofit that researches environmental, energy and natural resource issues. “The reason they’re problematic is because we don’t know how to prioritize them. It’s a big void.”

An analysis by Raimi and other researchers for Columbia’s University’s Center on Global Energy Policy found that a federal program to plug orphan wells could create as many as 120,000 jobs if half a million wells were plugged. But the effort would require significant coordination with states to identify and prioritize those wells.

In Texas, the cost to plug and restore a well ranges from $20,000 to $40,000, according to Raimi’s analysis of state data. The state Legislature in 2011 directed the Railroad Commission to accelerate its efforts to plug abandoned wells; the agency has a designated fund for that purpose. The state also requires oil and gas operators with more than 100 wells to post a bond of $250,000 as assurance that they will clean up well sites after they’re shut down.

In 2019, Texas documented more than 6,000 orphan wells, almost all on private land, according to an analysis by the Interstate Oil and Gas Compact Commission. That’s likely a conservative estimate, industry observers said.

“Texas is an enormous state,” Sebor said. “There’s a huge amount of opportunities for state remediation of contaminated sites — it’s a matter of the state having enough manpower to get through them all.”