For families that lost loved ones or jobs to the pandemic, Thanksgiving carries extra weight this year 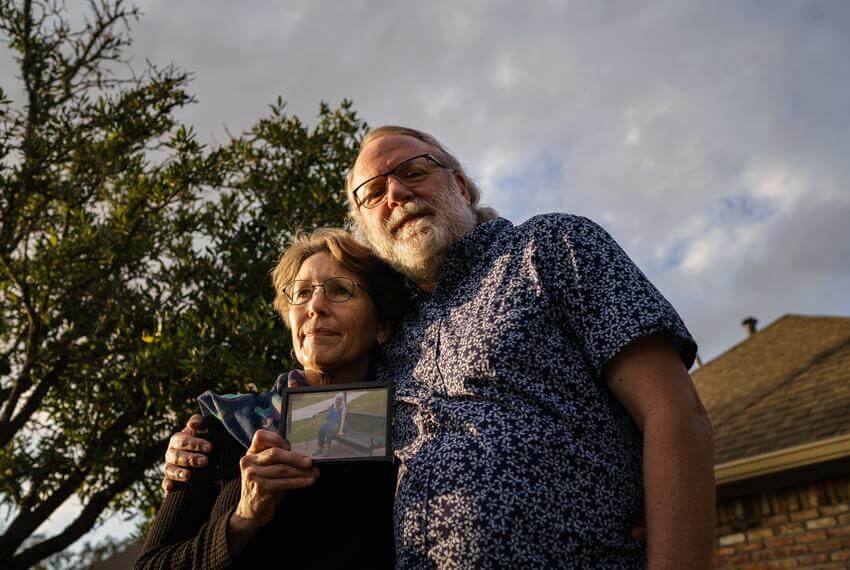 By Trinady Joslin, Aria Jones, and Sami Sparber at the Texas Tribune, November 25, 2020

When Chris Mabe’s mother, “Gramma Blue,” moved to Brazos County, her family got a bigger home for all the friends and grandkids they expected her to draw from across the country. The house had a music room, a large kitchen, extra beds and a 12-seat, hand-carved dining table.

But this Thanksgiving, the house will be nearly empty. Mabe’s 81-year-old mother, Jewel Bergan-Brumbaugh, died this March, one of the state’s earliest victims of the coronavirus pandemic.

Adding to the isolation, no students and faculty from Texas A&M University, where Mabe’s husband Jim works, will be invited to share a meal this year. And all of the couple’s family, including their two adult children, live out of state. The only attendees for Thanksgiving dinner will be Jim, Chris and her mother’s yowling, 16-year-old cat, Scooter.

“I dread the things that will come up for me and the amount of effort it’s going to take to rise above the grief and the fear and the anger about this happening to our country and the world,” Chris Mabe said. “It’s not fair. It’s not just. It’s terrifying. And yet I know we’re going to figure out how to be OK.”

This year’s pandemic has brought untold suffering to families across Texas. The state has reported over 20,500 deaths from the pandemic alone. More than 8,000 were hospitalized in the days leading up to the holiday. Since March, more than 3.8 million Texans have applied for unemployment relief, with 70,000 applying through the first two weeks of November.

And now the holidays are arriving, a season that will be especially difficult for many of those who have lost loved ones, jobs, and a sense of normalcy. Making things worse: At a time when they might take solace in the company of friends or family, public health authorities are urging them to stay apart.

Justin residents Ashley and Terry-Lee Washko were saving to buy a house before the pandemic hit. Then when Terry-Lee, 35, was laid off from his job at an oil field company in June, Ashley, 32, had to drive four hours to pick him up from the side of the road. After months of searching for a job and receiving unemployment checks that didn’t amount to enough to pay the bills, Terry-Lee got a job at a nearby warehouse last week. Still, they lost the company car that came with his job and their dreams of buying a house anytime soon.

Ashley said the job she’d always worked to stay busy became the only source of income to help feed their two teenage kids and Terry-Lee’s father. As their savings has started to run out, they won’t be able to afford food they typically have for Thanksgiving.

“It’s been so long since I’ve had to worry about groceries and now, I’m like, ‘Hey, why don’t you go to Dollar Tree, I think they have that there,'” she said. “It’s just a struggle when the kids are about to be out for Thanksgiving break and they’re gonna be home all week and I’m like oh my gosh we don’t have enough food for them.”

Normally, Ashley’s family gathers and brings out a large tablecloth for people to write what they’re thankful for this year. She wrote last year that she felt blessed to have the life she did. Now, her family will stay home. She said if she had to write something on the tablecloth, it would be that the year is almost over.

Social service organizations and food banks across the state are working double to serve an influx of Texans needing assistance. The holiday season is always the busiest time of year for food banks, as they work to ensure every Texan gets to sit down to the Thanksgiving dinner table with enough to eat, said Celia Cole, CEO of the food bank network Feeding Texas, which serves 4.5 million Texans annually.

But this year, the need is much higher than in previous years, Cole said. She estimates food banks statewide are serving twice as many families as they were before the pandemic.

In El Paso, a major hot spot for cases, the organization is currently receiving many more requests for home delivery from people who cannot safely go out to get food, Cole said. The Rio Grande Valley and Houston have also seen a significant increase in need over the last month, she said.

“There are, unfortunately, no instances of decreased need,” Cole said. “It’s a lot more people needing help, a lot more food going out the door, and it’s a lot harder to get food to people in need.”

Early in the pandemic, food banks struggled to keep their shelves stocked as volunteers were told to stay home and grocery stores had less surplus to donate.

More Texans than usual showed up Saturday to receive a Thanksgiving turkey from CitySquare, a Dallas nonprofit that provides affordable housing and operates a local food pantry, said John Siburt, the organization’s president and chief operating officer. The annual event was turned into a drive-thru this year, with volunteers handing turkeys to people in cars.

That strain is being felt even by people not directly affected by the pandemic. In Mt. Vernon, Tony Hall, 57, lost his job last year. Hall and his wife, Teresa Barinecutt, 59, have tried reaching out to organizations for housing, but haven’t been able to find any help.

Hall was working as a log roller last year when one of the 150-pound logs rolled into his chest. He told himself he could shake it off, but had to go to the hospital a month later and discovered that he had loose blood in his lungs that caused blood clots and pneumonia. Without health insurance and unable to work, he and Barinecutt were evicted from their home and are now living in their car.

“What I need more than anything is a place to get out of my car and lay down and get some rest,” Tony said.

Experts say that reports of depression and anxiety increase around the holidays during a typical year. They fear increased loss and lack of normal support systems will make this year even worse.

“There’s a lot of societal pressure on us to be happy and joyful during this time of year,” said Julie Kaplow, executive director of the Trauma and Grief Center at the Hackett Center for Mental Health. “We know that there are a lot of reasons why that may not be feasible or possible for many families, this year.”

Joy Alonzo, clinical assistant professor at Texas A&M Health Science Center, said the constant stress of worrying about you or loved ones catching COVID-19 isn’t making things any easier. Almost 80% of adults said the pandemic was a significant source of stress for them, according to the American Psychological Association’s Stress in America 2020 report.

And people like Chris Mabe, who have already lost someone, are navigating their grief in a time where typical support systems like gathering together aren’t possible.

“They’re also grieving for a loss of tradition, loss of what they would normally do during this time period,” Alonzo said. “They’re actually grieving for normalcy.”

Mabe said she’s feeling dread about the coming holiday, “but I don’t want to feel that.”

She said sticking to the routine and finding ways to stay connected during the holidays are going to be the family’s “safety light.” She said she’s still planning to cook a big turkey, make video calls, exchange photos on Facebook and stick to her ritual of watching football and yelling at the TV.

“I mean, it’s not what I want to project, and it’s not what I’m going to talk about on the Zoom call, but I’m really aware that that’s what I’m feeling because it’s a reckoning,” she said. “It’s a milestone, anniversary dates and little milestones, they bear so much weight, and it’s going to be hard.”

Mabe’s family could never gather for a funeral after the death of her mother because of the pandemic. She said it makes her angry that while her family canceled its celebration, her neighbors are still having parties.

Normally, family members would gather in the same room and process their loss together. They would talk about how angry or sad they were, laugh, cry, play music and crack jokes with a bottle of wine or sparkling cider in tow.

“We never got to do that together. and that is a huge loss and we’re not alone in that,” Mabe said.

She said she feels lucky to have the financial resources to support her family and access mental health support. Still, despite having experienced tragic losses in the past, she said grieving doesn’t get any easier.

“Our family has lived very hard lives for lots and lots of reasons. … We’ve always found a way to get through it,” Mabe said. “And we’ll get through this, too. But it is going to be exhausting.”

How to get help