Blanco man starts an organization that founds schools in Nigeria 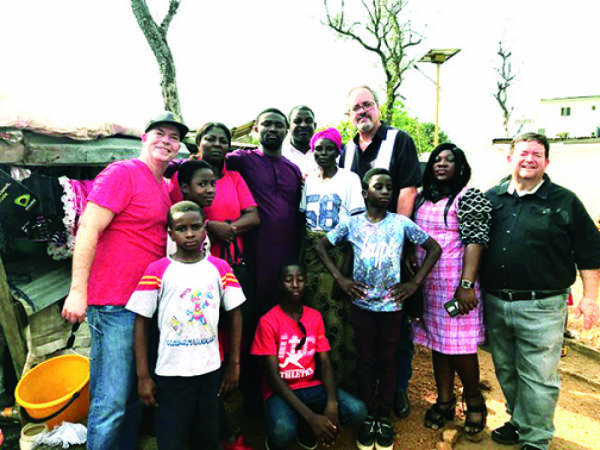 One Blanco man, a lifelong Christian, saw a chance to make a difference in the world by starting a nonprofit organization that founds schools in a war-torn African nation.

Faith is fierce in Nigeria, which is why Mike Arnold, co-founder of Africa Arise, has been drawn like a magnet to its people.

“The people are incredible; it’s an amazing place” Arnold said.

“The first thing you see at the airport is a sign that reads: ‘Welcome to Nigeria, home of a people with a passion.’ That’s actually an understatement.”

He’s started spreading the word about Africa Arise and raising money to found a network of schools within Internally Displaced Person (IDP) camps in Nigeria.

Arnold has been spending some time speaking with local church leaders and faith organizations because he sees parallels with a place thousands of miles and a 36-hour plane ride away.

“The faith they have is dynamic and real,” Arnold said. “Miracles and healings are commonplace. People here in the U.S. have started to doubt this kind of thing because they’ve never seen it, but I’ve witnessed healings there.”

Arnold said that Christianity in Nigeria is so intense because of the dangers they face.

“When people go to church on Sunday, they know it might be the last thing they ever do. Boko Haram is insanely brutal and it’s non-stop.”

For Miss Hanatu, a refugee at Camp Abuja, Nigeria, the danger of terrorist organization Boko Haram is all too real. Boko Haram translates to “Westernization is sacrilege” in the Hausa language and it forbids any kind of Western education. Boko Haram has been wreaking havoc in Nigeria since 2002, killing hundreds of people, including many Christian Nigerians.

“They killed many people right before my eyes,” Hanatu said in a video for Africa Arise. She had to escape her village in the middle of the night, enduring a treacherous mountain trek.

She has no family in the camp, her family members killed or scattered.

However, if people were literate and better educated, Boko Haram would never have arisen, she said.

“We need to teach these children,” Hanatu said. “It will affect all of us, directly or indirectly, if we don’t educate these children.”

The first Arise Academy has recently opened its doors at Camp Abuja, but Arnold would like to see the academies proliferate. There were just over 250 school-age children just in that one camp, and there are dozens more just like it all over the country, he said.

“Our goal is to have schools in all of the IDP camps in the country,” Arnold said. “I think it’s an attainable goal.”

The next step for Africa Arise is to conduct a study of Nigeria’s IDP camps and determine how many children are in need of a full-time teacher. Some camps already have school structures but other camps do not, Arnold said.

Arnold’s been laying the groundwork for Africa Arise for a year, until finally in November of last year, everything started to become a reality.

“We toured the country, visiting schools and churches.”

The team ended up visiting Camp Abuja, home to around a thousand displaced people.

“Nothing could have prepared us for that,” Arnold said. “The kids were so bright and joyful but they often had endured incredible pain.”

The camp already had a small school building and books, but they needed a certified, full-time teacher.

“Too many children fall through the cracks,” Arnold said.

It costs $1,300 to employ a teacher. The annual cost for one of the academies is $5,000, which includes stipends for a few regular volunteers and security for the teacher.

“We’re looking for donations from individuals, but another idea we’ve had is to have churches adopt camps, and we also could help arrange mission trips,” Arnold said.

For more information on Africa Arise, including how to help, visit their website at www.letusriseafrica.org. See the original article: https://www.hillcountrypassport.com/blanco/article/30322/blanco-man-starts-organization-that-founds-schools