Big Money And The Thrill Of Flight: General Aviation In Fredericksburg Soars Through Pandemic 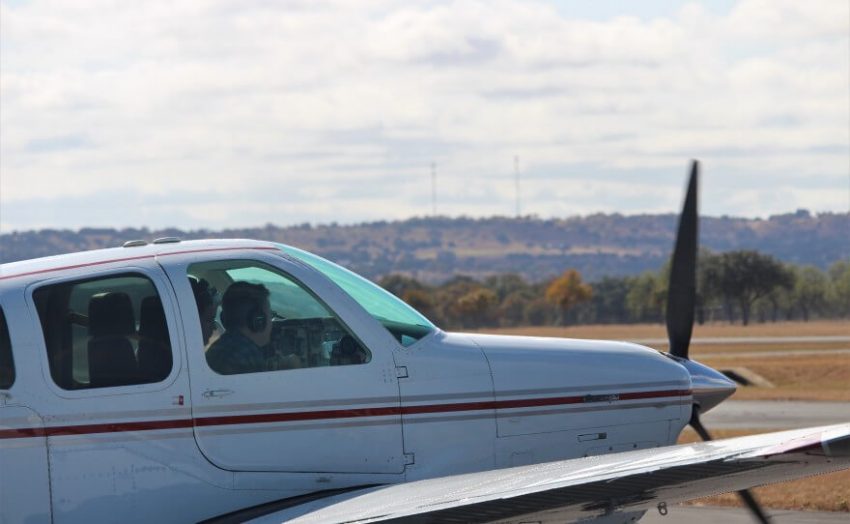 The Hangar Hotel in Fredericksburg relies on traffic at the Gillespie County Airport to make ends meet. When COVID-19 came to Texas and visitors stopped flying into town, the dropoff in business took a toll, as marketing manager Kelly Criddle explained.

“End of March into April, May, it was very slow,” she said.

According to her, the hotel usually reaches full capacity over the weekends in a normal year. In the late spring of this year, it was less than half of that.

But the airport’s central location in the Texas Hill Country, along with the runway-adjacent hotel and diner, brought some crucial, long-term guests — contractors with the Texas Forest Service.

“Actually, the timing on it really worked out well for us because we would have 10 to 15 of those guys in house at a time, and some of them stayed for two to three months,” Criddle said. “And they stayed with us throughout the summer, when they were flying out and fighting fires all over the place.”

Back then, Criddle was reluctant to answer a tough question: How long would that lackluster level of business at the hotel be sustainable? But now, she said, there’s a clear path ahead.

“Yeah, I think so, for sure,” she said. “I mean, we hung in there… so we had a stretch where it was very slow, but we did have some of our tried and true, loyal people that bought gift certificates from us, and that kind of kept us going and our morale up.”

And now those tried and true, loyal guests are back, bringing the hotel close to 100% capacity over most weekends, as well as more midweek guests.

The airline sector has been in a bit of a nosedive for the better part of the year, with planes sitting idle in hangars and thousands of employees laid off. But there’s more to the aviation industry than airlines. While one sector crashed, general aviation took off.

Tony Lombardi is the airport manager at the Gillespie County Airport in Fredericksburg. He’s actually the only county employee at this municipally-owned airport, and his job isn’t always glamorous.

“A helicopter took off last night, and basically threw a bunch of grass out there,” he said, gesturing towards an area with a couple dozen parked planes. “And I had to come out here and clean off the apron, to make it look nice.”

That attention to detail has paid off. Lombardi explained that general aviators notice a well-kept airport. They return and bring friends. With that growth comes development. What used to be an unmanned landing strip with about five buildings has expanded to a frequently used runway with about 30 buildings, including a convention center, a diner, and a hotel.

“And we’ve had a $1.65 million capital improvement project done since I’ve been in the seat,” he said.

The airport took a brief hit back in the spring, but business is back.

“I mean, I’m gonna tell you last year, the (fixed base operation) — the Fredericksburg FBO — sold 418,000 gallons of fuel. Okay, record year last year,” he said. “This year, they’re going to sell 380,000 — the second most amount of gallons that they’ve sold in their history.”

And during a pandemic.

The airport gets a good amount of use from visitors, but, according to Tim Lehmberg, executive director of the Gillespie County Economic Development Commission, most of the airport’s aviators are more than just tourists.

“Much of the airport use is… absentee landowners or property owners in Fredericksburg, or full-time residents that have private aircraft that are based at the airport,” he said.

According to a 2018 study by the Texas Department of Transportation, the airport is responsible for over 100 jobs and $13.7 million in revenue. But it’s difficult to capture the full effect it has on the local real estate market. The DOT study did not take into account the people who buy land because of the airport, which is centrally located and well maintained.

According to Lehmberg, about half of all residential properties in the area don’t have homestead exemptions, meaning they’re either used as short-term rentals or as secondary homes for absentee landowners.

“And it’s that group — many of whom are spending serious amounts of money on home sites and homes here throughout the county. And it’s great for our tax base. I mean, it really is,” Lehmberg said. “And the pandemic hadn’t slowed any of that down. I mean, it’s probably accelerated a lot of people’s timetable to get the heck out of wherever it is they are.”

Back in late May, a prospective landowner named Eric Lindberg visited Fredericksburg for that purpose.

“I’ve been a huge fan of Fredericksburg for a long time,” he told TPR outside the Hangar Hotel.

“I live in Dallas most of the time, but we actually managed to come down during a large portion of the quarantine to stay down here at an Airbnb for a month and a half, which is a fantastic way to actually get somewhere that we were able to be outdoors and actually continue to enjoy life through the quarantine,” he said. “I’m looking for ranch property. And so I actually came down for a little combination of tourism, and poking around some remote areas.”

Fredericksburg is attractive to well-to-do tourists and wealthy absentee landowners because it has big pieces of ranch property, boutique shops and wine tasting rooms — far away from the COVID-19 surges of the big cities.

But what is it about the airport, about general aviation that attracts so many people?

“Well, ever since I was a little girl, I’ve been interested in it and always wanted to, but I just never did anything about it,” said flight instructor Gwen Fullbrook, a passionate advocate for general aviation. She’s held educational seminars at the airport with hundreds of students in attendance.

“One day I woke up and said, ‘You’re getting old, you better get on it,’” she said with a smile. “And so I knew I would like it, but I just didn’t know that I would be totally eaten up with it, and quit my job, and do crazy things.”

Judie Mooney is vice president of the local experimental aircraft association and sits on the advisory board for the airport. She said Fullbrook’s flight school and frequent education events have been crucial to the local growth of general aviation.

“I feel like when Gwen has made it available,” she said. “And people now know that, ‘Yes, it’s an attainable thing. We can get our pilot’s license.’ And I think there are people out there that didn’t even realize it was an option. And they’re like, ‘Oh, wow, we can do this.’”

Fullbrook recently purchased a new plane — a vintage, 1943 Boeing Stearman, used for training Navy pilots during World War II. It’s a bright blue and yellow biplane, the kind you might see an old-timey daredevil wingwalk on.

Kris Finkbeiner, who runs a specialized flight school for tailwheel airplanes, took it for a spin. The engine sputtered and then roared as it took to the air, soaring over the rolling hills, dotted with ash junipers and mountain laurels.

As Finkbeiner stepped down from the cockpit, a military veteran walked up to chat with the group. He has deep roots in aviation, he said, and a familial connection to Stearmans.

Finkbeiner leaned in as Fullbrook and the veteran chatted.

“See this is what happens,” he said. “We get the airplane out, and people show up.”

“I’m telling you, they do,” Mooney chimed in.

The close-knit community, enticing real estate prospects and the thrill of flight have helped Fredericksburg’s general aviation sector soar through a pandemic that has battered most of the industry.