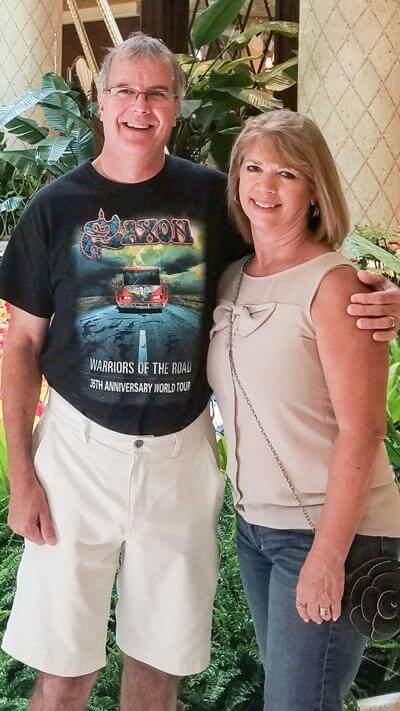 By Bonnie Arnold at the Hill Country Community Journal, November 20, 2020

Brenda Enderlin of Kerrville, wife, mother, grandmother, and longtime employee at James Avery Craftsman, is undergoing cancer treatments and surgery in her fight against pancreatic cancer. A fundraiser to aid her and her family will be held Saturday, November 21, from 11:00 AM to 7:00 PM

Organized by Enderlin’s family and friends, “Brenda’s Battle Benefit” will be held at the Hill Country Veterans Center building, 411 Meadowview Ln., Kerrville. Barbecue plates can be purchased for $10 each, between 11:00 AM and 2:00 PM There will be a live auction at 5:00 PM, followed by a raffle.

The auction and raffle are expected to offer numerous items, including a motorcycle, guns, golf trips, and perhaps a signed Dallas Cowboys item – though she said that might not be so enticing right now, considering how they are playing football.

The auction items also are posted on her Facebook page, to be considered before Saturday.

Flyers posted online and around the community say live music also will be performed by “Carlos & Dan.”

All proceeds from this event benefit Brenda Enderlin, who is battling stage 4 pancreatic cancer; and the funds will be used for future medical expenses and lost wages.

Enderlin, 56, said she has lived in Kerrville since she was nine years old; attended Tivy Elementary School – “when that one was here” – and graduated from Tivy High School in 1982.

She’s been married to Kevin Enderlin for 31 years and they have a 23-year-old son, a 29-year-old married daughter (Kristen Lambert), and two granddaughters, Delanie, age 2, and Carter, age 4. The little girls call Brenda “Bebe.”

Brenda said she has worked for James Avery Craftsman for a total of about 26 years, the last 16 in “production management.” She said that team’s job is to make sure each design and products “get from the front to the end of the building in a timely manner.”

“I have insurance but also co-pays to pay, and loss of income,” she said.

Enderlin said she experienced no symptoms worrisome enough to make an appointment with a doctor until mid-July last summer when she had swelling in her legs.

According to medical descriptions, it’s apparently common that patients, especially women, with this disease have no serious symptoms that point to cancer, and symptoms they do notice can be explained away as other more minor complaints.

Those include yellowing of eyes and skin, bloating, loss of appetite, lower back pain, all-over itchy skin, and one’s stomach hurts for no good reason, among others. Get a doctor to check such symptoms, though it may seem silly or minor.

When Brenda’s husband took her to the Emergency Room – in the middle of the COVID-19 restrictions and had to wait outside, not with her – the tests the Peterson Hospital staff ran that night had shocking results.

“The tests showed cancer; and it had metastasized into four tumors in my liver plus the mass in my pancreas,” she said. Kevin added, “Like Alex Trebek and Ruth Bader Ginsburg.”

Brenda said they told her without treatment she had three to six months to live; and with treatment, perhaps 18 months.

She said that July night in the ER, the staff let Kevin in for 10 minutes, and she had to tell him this news and tell him what to bring her from home as she was being admitted into the hospital.

She and her family have been dealing with this disease and treatment mostly from home since then, but she was hospitalized again for related surgery in August and on November 11.

“This surgery was part of the complications,” she said last week. “The tumors were pushing on my small intestine and I couldn’t eat anything. The surgery was to by-pass that so I can eat again. The chemotherapy is keeping the tumor activity down; and that has dropped the cancer activity in the process.”

She said she also had to have surgery in August to keep blood clots from going into her lungs.

“I’m in the middle of my 12 chemo treatments now.”

“Our church, Calvary Temple Church, has been amazing, very, very supportive,” she said. “We put up a Facebook page, ‘Bebe’s Encouraging Words,’ and people go on there all the time to say, “We’re praying for you.’ An amazing number of people have responded with words of encouragement;” – “Or a lasagna,” Kevin added.

The couple say they mainly need people to show up at the fundraising event on Saturday.

“Our daughter has been a ‘rock star’ on this, and we’ve seen our granddaughters at home,” Kevin said.

Brenda lost her hair during her treatments; and said she has a wig she normally wears when the little girls are there.

“But the four-year-old is very inquisitive, and I decided it was time to show her. She said, ‘Oh, Bebe, what happened to your hair?’ I told her it came out because I was taking medicine to make me better. And she went to look at my medicine bottles, and asked, ‘Bebe, which medicine makes your hair funny?’

“And then when we were napping together on my bed, she went to get her Elsa doll, with the long blonde hair, and said she wanted to cut it all off ‘to look pretty like yours’.”

Brenda and Kevin said this has been a juggling act for them all. There were no facts or details for two or three days after her ER visit. And the same day as her first chemo treatment, their daughter and her family, San Antonio residents, had a major water pipe burst and flood their home with three inches of water.

Now, Brenda says, “As bad as this prognosis is, I am thankful God didn’t take me in an instant. I believe I will have total healing. The doctors don’t number my days; God does. I’ve had time to talk to people about how much I love them. Not everyone gets that.”

Governor reiterates Texas will not shut down again while touting the arrival of new coronavirus treatmentBig Money And The Thrill Of Flight: General Aviation In Fredericksburg Soars Through Pandemic