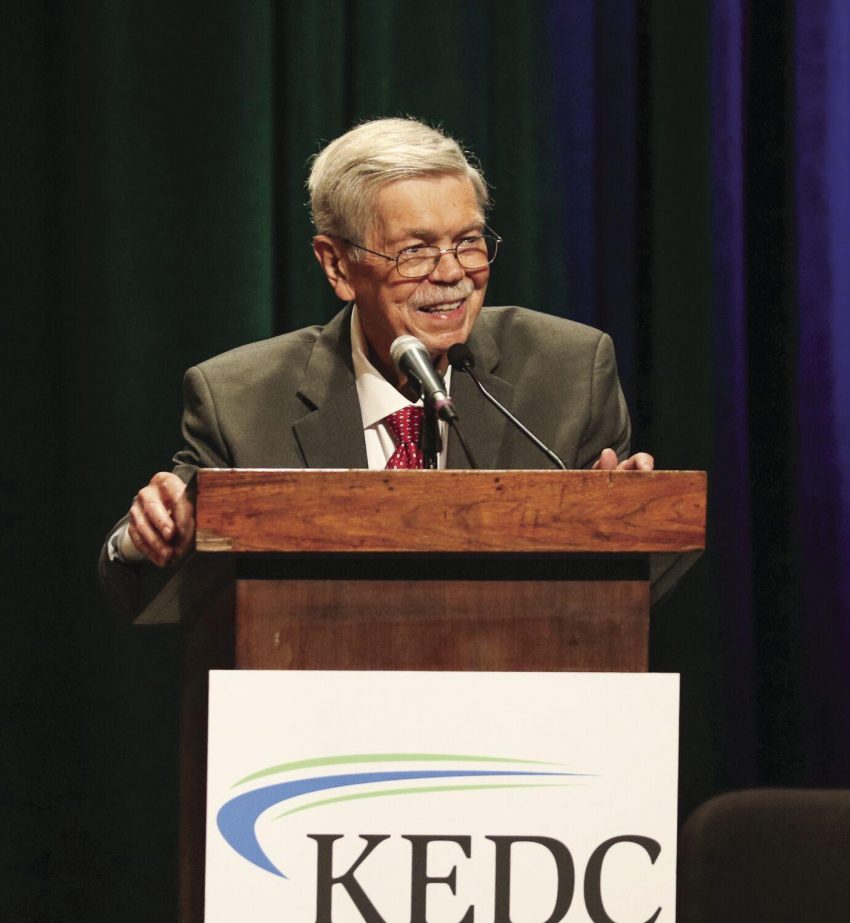 The City of Kerrville and economic development partners announced Aug.13 in a major press conference downtown that Killdeer Mountain Manufacturing, based in North Dakota, is expanding its manufacture of electronic components for military and aerospace industries to Kerr County.

Founders and majority shareholders Don and Patricia Hedger and some of their family members/colleagues were present at the announcement, to add to the news and accept the many welcoming speeches made by an array of local and state officials.

The family went back to North Dakota from this good-news visit with gifts of Texas-theme cowboy boots and traditional Western hats.

The official announcement included a new business site across State Highway 27 E. from the Kerrville-Kerr County Airport in the Airport Commerce Park; a goal of 400 jobs over 25 years coming with the company, current annual wages of more than $42,000, and an estimate of “sooner rather than later” and possibly nine months to open the doors for business.

This economic development project has been under discussion here and in North Dakota for months, under a code name “Sky Master” when it was mentioned for executive sessions in local governmental meetings.

KMM currently employs several hundred people among four locations in Killdeer, Dickinson, Regent and Hettinger, N.D.; and is expected to double their operations with this expansion into Texas.

According to announcements at the press conference, KMM’s customers include the U.S. Department of Defense, Boeing, Southwest, Raytheon, Lockheed Martin and other aerospace companies.

KMM is a family business. Founder Don Hedger and wife Patricia are majority shareholders; and the Hedgers’ children Dan, Patrick and Deb all work for the company, as do two of their grandchildren, Kristin Hedger and Erika Hedger Bauer. Kristin came to Kerrville for this announcement and addressed the audience, too.

Blackburn said, “I have been excited about this company since I first heard about the possibility of them expanding here from North Dakota,” Blackburn said. “To have this established business expand to Kerrville is a great opportunity, and this company is such a solid, family-owned business that treats their employees well.”

Blackburn said there is an excitement about this aviation manufacturer coming to Kerrville, not only given the jobs it will produce, but their work here for commercial airlines and Department of Defense components is exciting in itself.

“Also, there is the possibility that some other aviation component manufacturers and even space exploration suppliers could locate here.”

Kerr Economic Development Corporation Executive Director Gil Salinas opened the program and thanked all the individuals who worked together to achieve this success. He called KMM “the newest corporate citizen in Kerrville and the Hill Country and Texas.”

“What an historic moment for Kerrville,” Salinas said. “KMM’s investment in Kerrville was truly a team effort which started more than a year ago. We couldn’t have succeeded without the efforts and immense support of our different community leaders and stakeholders. As it pertains to economic development, this project will help us fully develop an industrial cluster in aerospace, aviation and advanced manufacturing.”

Salinas called KMM “a Tier 1 supplier in aerospace aviation “ and attributed this economic development and KMM’s planned investment as derived from the city’s 2050 Comprehensive Plan, which, he said, “afforded us the blueprint and tools necessary to recruit projects in aerospace.”

He said this is only the fourth time in his multi-year career that he has called a business development “game-changing,” and called the Hedger family smart, careful with their resources and caring about their workers. He said they started their company in the 1980s in a recession.

Salinas introduced Blackburn, who also said this opportunity with KMM should spur on more efforts for workforce housing.

Adriana Cruz, executive director of economic development and the Tourism Office in Austin, spoke on behalf of Gov. Abbott, saying KMM’s $8 million investment and hundreds of new jobs undoubtedly are a win-win for making Texas a leader in aviation and defense.

“’Made in Texas’ is a powerful brand,” she said, and a factor in Texas being called “the best state in business.” This is a great win for Texas, she said.

Cruz also read a proclamation from Gov. Abbott as the meeting closed.

Julian Alvarez of the Texas Workforce Commission called this “a great day for Kerrville” and said this business expansion will put people to work in great jobs. He said the TWC’s maintenance of a skilled and ready workforce was important to this family and this opportunity.

He said, representing the TWC, he observed Tivy High students training to operate drones; and TWC has apprenticeships and other grants for training, a factor that was included in discussions with the Hedger family.

“Student workers will be able to say, ‘Wow! I made that!’ You all are making dreams come true and changing the lives of many people you will never meet,” he said to the Hedger family onstage.

He called their investment here “the magnitude of a Tesla or SpaceX.”

Alvarez introduced Hedger as “Papa” and the KMM founder addressed the audience.

Hedger called the occasion a “great day” and he’s really honored and looking for good things in the future here.

He outlined taking a big job with a large electrical company where he also worked with air and space crafts.

“My dream came true when we established this company in a small town in North Dakota, and then a second location in a town the size of Kerrville. Our third one was in a mid-size community, where we had a total of more than 400 employees.”

He promised to be ever-growing in the Kerrville area.

He also cited past Texas and North Dakota connections with cowboy cattle drives from here to his state, adding, “In a way we’re hoping to repay a little of what you brought us.”

After citing their manufacturing record with Boeing, Lockheed and others, and their recent spotless company audit, Hedger called Hill Country leaders and citizens smart and extremely hospitable. He said it felt like coming back home again; and thanked granddaughter Kristin, as the company’s lead negotiator.

She said it was an honor and pleasure to be in Kerrville and thanked the Texas Governor’s Office for their part in this.

She said the Kerrville negotiating team flew to Killdeer, N.D., for tours and discussions in minus-20-degree weather.

“The aerospace industry is a very dynamic support for the health and strength of our country,” she said.

She called the cultures in Killdeer and Kerrville very family-oriented and business-friendly, offering lots of opportunity for KMM in Texas and Kerrville.

State Rep. Andrew Murr also spoke, saying first, “Holy smokes!” and then, this success is a credit to both Kerrville and the state. He thanked the Hedgers for valuing Texas enough to create a relationship with their company; and that he was excited to receive them with open arms.

“You give us one more reason to brag,” Murr said.

Robert Kelly offered a “big Texas welcome” and said he hopes the KMM people “grow to love it as much as we do.

“We’re proud to invite you to share our home with us. This is the kind of economic development we welcome … We need jobs in the future and this allows us to grow the way we want and need to grow.”

He called it “truly historic in addition to being a ‘game-changer’ – the kind we’ve been looking for.”

City Manager Mark McDaniel said this day had been a long time coming; and thanked the mayor, city council, EIC, KEDC, Trey Atkission, the city staff and the Hedger family and team.

He noted the North Dakota motto in Latin translates to “One sows for the benefit of another age.” He said this deal connects the two states through Teddy Roosevelt, and is a bold move, to break new ground while pursuing Kerrville’s 2050 Plan goals.

He thanked the Hedgers for their community-minded approach to business.

Richards called this deal a “wise and essential investment” and that the Kerrville community thanks the family for being the kind of people that folks want to be part of.

“This was a remarkable effort on behalf of a lot of people,” he said.

Wittler called KMM a perfect fit for Kerrville; and complimented Salinas and the listed stakeholders on their work. “This community is blessed with great leadership.”

The biggest thanks go to Kristin Hedger, her family and the KMM leadership, he said. “I know it will be a highly successful partnership.”

Local incentives were offered by the City of Kerrville, Economic Improvement Corporation, Kerr Economic Development Corporation and Kerr County, they said, but no dollar amounts were given at the announcement.

The significance of this major employment expansion into Texas also was recognized through incentives provided by Governor Greg Abbott’s office and state agencies. Those incentives include $900,000 from the Texas Enterprise Fund; $360,000 from the Texas Workforce Commission’s “Skills Development Fund,” and a $3,000 veteran–created job bonus.

The City of Kerrville and its EIC were to consider local matching incentives at Aug. 17 meetings.

Peterson Health reports no COVID-19 hospitalizations in Kerr County for first time in weeksUpdate: Kerrville girl, 8, hit in DWI crash while in bedroom has died