WWII Veteran will be celebrating 100 years of life 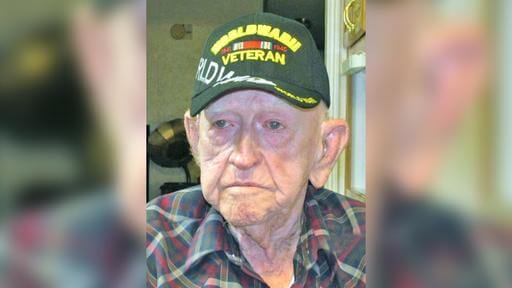 By Julye Keeble at the Uvalde Leader-News, November 8,2020

Uvalde resident Hollis P. “Red” Williams, a U.S. Army veteran who served during WWII, will attain the milestone of one century of life in about two weeks on Nov. 24, and anyone wishing to congratulate him is welcome to send a card.

Williams’ family members said there will be no public 100th birthday celebration due to health concerns and they don’t want any drive by parades.

“He’s had pneumonia twice this year, so we have to be careful,” said grandson Don Williams.

The family will celebrate privately and anyone wishing to honor “Red” Williams, nicknamed for his hair color, on his 10 decades of life and service to his country may send a card to him at 532 Country Lane, Uvalde, TX 78801.

Born in Arkansas, he came to Uvalde in the 1960s to work for Reed Oil Company after serving in the U.S. Army from 1945-1946, as a technician fifth grade, where he was trained as a portable power generator operator. He also qualified as a marksman with a rifle, according to his military discharge papers.

Before he entered into military service, he worked as a truck driver, transporting livestock, fuel and feed supplies in trucks he owned in an near Rogers, Arkansas, for about eight years.

Williams served during WWII with the 126th General Hospital in the Philippine Islands, where he supervised four other men operating a mobile power station which helped power a hospital, among other things. He also made repairs to equipment.

While working for Reed Oil Company in Uvalde, he helped build the East side Shell station, which he ran for years until he subsequently went to work for Gensco Pipe Company. With Gensco for about three decades before retiring, Williams supervised traveling crews who dug up and transported pipes.

Daughter-in-law Dora Cook and grandson Williams, who help care for him, say he drove himself to restaurants, and especially the donut shop, until about a decade ago.

Williams has remained independent, living by himself in his home, though his family says there is a group of about five people who assist him with chores such as cooking.

They say he loves gardening, growing tomatoes and vegetables, and still grows a few of the latter in raised container gardens they have arranged for him.

Williams has experienced macular degeneration which has adversely affected his eyesight, but he is a long-time subscriber to the Uvalde Leader-News and enjoys hearing about news and events from a friend who regularly visits to read to him.