Wastewater permit nixed in a nearby town 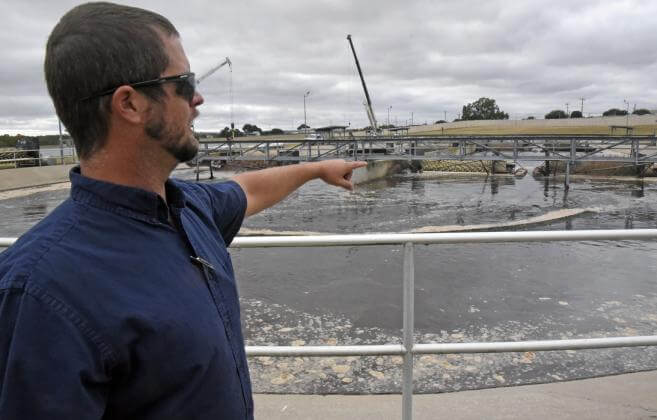 Images by Samuel Sutton and City of Fredericksburg

(Editor’s note: The article was amended with a clarification after the print edition concerning the City of Fredericksburg’s Water Reclamation Facility Discharge Permit)

Fredericksburg’s wastewater discharge permit may be safe for now, even though a license at a similar central Texas facility  was recently reversed.

The City of Dripping Springs announced Friday, Oct. 30, that District Court Judge Maya Guerra Gamble, of the 459th Texas District Court, found that its permit ordered by the Texas Commission on Environmental Quality “is not supported by the law or substantial evidence and should be reversed,” according to a news release from the City of Dripping Springs.

The permit reversed is similar in language to the City of Fredericksburg’s discharge permit, also ordered by TCEQ, which allows them to discharge treated wastewater into Barons Creek.

Under this permit, which was recently extended for five more years with an issue date of Oct. 12, 2020, the city is allowed to discharge 2.5 million gallons of treated wastewater per day into the creek. Kris Kneese, assistant director of Public Works & Utilities, said the city’s influent flow rate on average is 1.1 to 1.2 million gallons per day.

Kneese said the application process to extend the permit took about 18 months to complete, and consisted of two public notification and comment periods. With a response from the Texas Parks and Wildlife, TCEQ chose to keep the permit the same, or unchanged from the city’s current discharge permit.

“The solid waste is dewatered with a screw press, conveyored into dump trucks and hauled to the city’s landfill, in accordance with the city’s Solid Waste permit with TCEQ,” Kneese said.

While the treated water is discharged into Barons Creek, the city also contracts it to other entities, such as Lady Bird Johnson Municipal Golf Course and Boot Ranch Golf Course for irrigation. The Frieden Development, a new subdivision to be constructed in the city, will also use it in the future for irrigation of common areas.

With these irrigation contracts, the city typically discharges little-to-no amount of water during the drier months.

The City of Fredericksburg could be in danger of losing this permit, as Bill Bunch, executive director and lead attorney for SOS Alliance, said the group is working to pursue other permits.

Kneese said if the permit were ever to change, “the city would work with state [TCEQ] and local leadership.”

“At this point, we are continuing to follow the permit that has been issued to us,” he added.

Officials with the City of Dripping Springs said they are working with TCEQ to appeal the reversal, which they said was required for a “much-needed expansion of its treatment plant,” and would’ve allowed them to “address the area’s growing wastewater needs.”

“As I mentioned when we heard the news of the District Court’s decision, we are confident in our ability to move forward,” said Dripping Springs Mayor Bill Foulds Jr. “We are confident that our appeal to the Third Court of Appeals will confirm that the city is doing everything in its power to accommodate the wastewater needs of our growing community in the most environmentally sensitive manner possible, and that our permit will stand.”