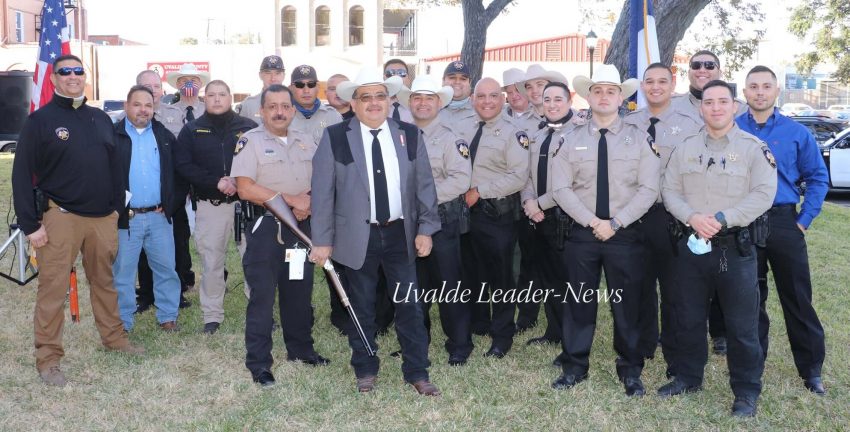 Uvalde County Sheriff’s Deputy Eric Gonzales on Tuesday was awarded a Bronze Star for valor and bravery in the line of duty, as well as a commemorative plaque, at an awards ceremony hosted by Sheriff Charles Mendeke.

Deputy Kevin Carr spoke of the Feb. 22, 2020, incident where Gonzales pursued and then exchanged gunfire with a subject, who turned out to be a registered sex offender after the person fled from a traffic stop. Carr noted Gonzales displayed exemplary conduct and took care of the lives of others.

At the time, Gonzales had been a deputy for about three years.

“On Saturday, Feb. 22, 2020, at approximately 9:30 p.m., Deputy Gonzales was ambushed by a suspect in motor vehicle pursuit as he attempted to apprehend the suspect,” Carr said. “Deputy Gonzales’ patrol unit received multiple bullet strikes, including the driver’s door frame along side the driver’s window, which was struck at least twice. Both of which deflected away from the vehicle and from the vehicles interior. … He was not injured in the ambush.”

While processing Gonzales’ patrol vehicle for evidence several days after the incident, Carr found a prayer card in the door frame, which was given to Gonzales by the wife of late Deputy Mike Schaefer, who died on Dec. 24, 2010, in the line of duty.

“That prayer card, which was St. Michael, the patron saint of police officers, was between two bullet strikes and that deputy, and I have no explanation as to how those bullets did not penetrate that car.”

The incident began Feb. 22 at approximately 9:28 p.m. when Gonzales initiated a traffic stop for a non-working third brake light near the intersection of U.S. Highway 83 North and Farm to Market Road 1050 in Uvalde County.

Rio Frio resident Dustin Whitlock, the sole occupant of the vehicle, sped away from the stop and the UCSO deputy pursued him over 20 miles into Real County, where he was joined by the Garner State Park police.

At approximately 9:52 p.m., Whitlock crashed his vehicle into a tree on private property located off Farm to Market Road 1120 in Real County, approximately half a mile east of U.S. Highway 83 in Leakey.

The deputy and Whitlock exchanged gunfire, with Whitlock’s bullets striking the deputy’s patrol unit multiple times before he fled the scene on foot.

Whitlock, convicted in 2011 of indecency with a 14-year-old child by exposure and required to register on the sex offender database annually until 2028, was found on March 1, in Ingram, approximately 60 miles from the Leakey area where he was last seen.

Sheriff Mendeke, who will be retiring from his elected post on Dec. 31, after serving 12 years as county sheriff, was presented a with a Henry rifle engraved with his dates of service and name, and a citation acknowledging his service and over 30 years of experience in law enforcement.

“While serving as sheriff of Uvalde County from January 2009 through December 2020, Sheriff Charles Mendeke exemplified the leadership qualities of ‘Be, Know, Do’ and upheld the finest standards of Texas law enforcement,” Carr said. “Sheriff Mendeke skillfully led the department through multiple challenging occurrences including the line of duty death of Deputy Michael Schaefer, the construction and relocation of a new law enforcement facility and county jail, as well as guiding the COVID-19 response.”

He said Mendeke was also instrumental in increasing the number of patrol deputies and implementing 24/7 law enforcement coverage throughout the county.

“His insight led to the increased usage of federal funding grants that modernize equipment used by the department, more than doubling the number of patrol vehicles and other vehicles used,” Carr continued. “Throughout his term as sheriff, Sheriff Mendeke’s unwavering faith and trust along with his unquestionable loyalty to the citizens of Uvalde County made the area more conducive to law enforcement operations in the area.

“His flawless relationships with federal, state, and local agencies led to an increased level of cooperation throughout the county. And as I said earlier, leadership is not a dissertation, it is the simple actions that we take to help others.”

Mendeke, visibly moved by the surprise honor and gift of the rifle, thanked the county employees and members of his department.

“Valdez, Valdez is coming,” Mendeke said, referencing a 1971 western movie adapted from a novel by Elmore Leonard about a small town Mexican-American lawman who is driven into the mountains then turns the tables to fight back when persecuted by a local rancher.

“I think if he was here he would want me to raise it up like this,” he said, hoisting the rifle in the air.

“That rifle means a lot. I think I was saying, one time before, I think I discussed it with Doug [Postert] and Bob Price, if we were on top of a mountain looking down on Uvalde County, I’d be holding a rifle just like that,” Mendeke said.

“It’s been a lot of good years working for Uvalde County, I really have enjoyed it. Elected officials have been great to me and I couldn’t ask for anything better,” Mendeke said, also expressing his thanks to his wife Annette and his two sons.

UCSO investigator Sgt. Mike Villarreal, who now works for the 38th Judicial District Attorney’s Office, was awarded a plaque in recognition of his contributions to the department during his 12 years of service.

“In Mike’s 12 years with the sheriff’s office, I don’t think we would have been able to successfully prosecute a case without his hard work and dedication to duty,” Carr said.

The ceremony began at 4 p.m. on the east lawn of the Uvalde County Courthouse, and Uvalde County Judge Bill Mitchell served as emcee.

“We do appreciate you coming out this afternoon as we honor a couple of people that have brought an awful lot of value to this community. All of you are valuable to this county, we appreciate what each and every one of you do on a daily basis. We know that your job is difficult,” Mitchell said.