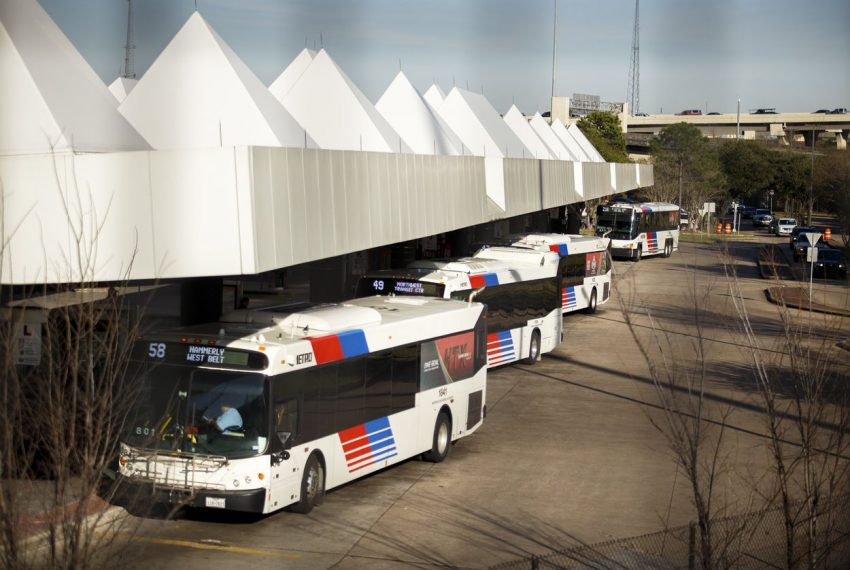 Houston Metro has a $3.5 billion bond on the November ballot to greatly expand the region’s public transportation system. Image credit: Michael Stravato for The Texas Tribune

As road congestion worsens in Texas cities, public transit authorities are racing to raise money for vast expansions of light rail and buses to transport the state’s growing population.

By Chase Karacostas, The Texas Tribune.

Texans love to complain about traffic, but for decades, funding has often lagged for something that could reduce the number of cars on the road — public transit.

That couldchange in two of the state’s largest metro areas, as traffic congestion has gotten to what experts call a crisis mode andbus or train rides are moreconvenient than hopping in the car for some urban Texans.

Transit agencies in the Houston and Austin regions are asking voters in upcoming elections for permission to take onbillions of dollars in debt to transformtheir public transportation systems. Their bond proposals ride on the hopes that public support for transit is high enough in a state that’s long spent the bulk of public funds on roads and highways.

Houston Metro has a $3.5 billion bond on the Nov. 5 ballot, and an early poll conducted by Rice University for Houston Public Media and KHOU-TV already shows 60% support, easing fears that the low turnout that often comes with constitutional elections might doom the proposal.

“The city has changed. It’s a population that is much more heavily dependent on” public transit, said Rice political science professor Bob Stein, who conducted the poll. “It’s a taste and preference in a rising portion of the population that says, ‘We don’t want a car.'”

The bond would fund 75 miles of rapid bus service, 16 miles of light rail and $600 million in local bus system enhancements like restored stops and sidewalks.

Funding for public transit in Texashas fluctuated over the years. Support for transit bond elections was dependent on a number of factors. ranging from the timing of the election — presidential, midterm or off-year — the content of the plan for the requested money and even gas prices, according to experts from Rice and the University of Texas.

Houston Metro held its last bond election in 2003. The vote was successful and gave the transit authority $600 million to work with. But this year, critics formed a political action committee to oppose November’s bond election, saying Houston Metro can’t be trusted with “a blank check,” especially since the bond would fund additional light rail lines even though the ones built several years ago have yet to reach the ridership officials promised.

Meanwhile, Houston Metro’s board members are lobbying the public to support the plan, and the agency is spending $8.5 million on mailing and advertisements to explain the packageto residents. A PAC has also formed in support of it and already raised $250,000.

Austin’s Capital Metro is in the planning stages for its own billion-dollar bond next year. It’s the agency’s third try at a bond election in the last 20 years. The first, in 2003, narrowly lost by a few thousand votes, and the second, during the 2014 midterm, lost by 14 points. CapMetro’s deputy chief of staff, Sam Sargent, considers both instances to be comparable losses because the 2014 midterm had historically low turnout.

Dallas Area Rapid Transit has not had any bond elections in the last 20 years, but higher ridership and more cities contributing funding made it easier to meet matching requirements for federal grants. And compared with the Austin area, both regionshave much larger populations, contributing to higher revenue off the 1% sales tax from purchases in their operating areas.

Via, the transit authority in San Antonio, however, despite having a larger population than Dallas, struggles to get sales tax revenue – and other funding by connection – because its sales tax rate sits at 0.5%, with an additional 0.125% provided to a related transportation district. Recent attempts to raise the sales tax rate to a full 1% have yet to make much progress.

The Legislature provides little to no funding in each biennial budget for public transit, long preferring to support road and highway construction and maintenance. And billions of dollars are constitutionally required to go to roads.

“The 1920s was really the time when state-level gas taxes came into play, and they were about digging farmers out of the mud, so to speak — really improving the state’s roadway infrastructure,” said Gian Claudia Sciara, a professor of community and regional planning at the University of Texas. “Some states have turned that around and expanded that to consider these more broad transportation taxes” — but not Texas.

The closest the Texas Department of Transportation oftengets to supporting public transit is allowing city road construction grants to be used on things like designated bus lanes, and in cases where they own land or control the right-of-way near roads, they can help cities take over that space to put in rail lines. This trend is common in the South, unlike inplaces like the Northeast, where public transit is a mainstay of high-density, compact cities like Boston and Washington, D.C.

Sargent said that in just the last five years, more Central Texans have changed their perceptions of public transit. More people now understand its benefits, he said. So CapMetro is changing its approach to next year’s bond package. The agency is doing more to seek opinions from residents and passengers about what service expansions they want to see funded. Sargent said many people’s top priorities include additional buses and street lanes designated specifically for public transit vehicles — not rail lines like the agency has offered up in the past.

And Austin’s clogged roads, where a driver can spend 45 minutes going two miles, have reached a breaking point, Sargent said. Exact plans for what the 2020 vote would fund have yet to be nailed down, but Sargent said the focus is on major “high-capacity” transit corridors and expansion of Austin’s rapid bus service.

“Everyone universally knows and is vocal about the fact that congestion is horrendous and has gotten, you know, infinitely worse,” Sargent said. “I think that there is finally a sense of urgency that we have to do something, and there is some amount of trust that Capital Metro, along with our partners at the city, should be the ones to figure out that solution.”

Sciara echoed this and said one of the only ways transit authorities will get the support they want is if driving becomes more inconvenient than using transit.

“It’s often very difficult to compete with a private automobile,” Sciara said. “And I think in general we are reluctant to accept the ways in which we could make automobile driving less convenient and make transit use more convenient because we don’t want to give up that convenience.”

The transportation options marketed in bond elections have to seem useful to voters, and driving needs to seem like a worse option for any progress on public transit to occur, Sciara said. More than that, though, Stein said people need to not only vote for public transit funding but actually use it.

“A lot of people in the past have supported mass transit in the hope that other people would use it,” Stein said.

Back in Houston, Metro board chair Carrin Patman said she feels like voters in her area understand that the region is reaching a point where constructing bigger highways and building more roads simply won’t be enough to transport a rapidly growing city of almost 2.5 million people. If the bond passes, Metro will also seek a $3.5 billion matching grant from the federal government.

“Even to carry the same percentage of people [in 10 years] as we carry now … we have to build out our system, otherwise we are going to have really, really bad congestion,” Patman said. “There’s no time to waste.”

If one or both of the upcoming bonds is defeated, Sciara and Stein said it will be more representative of public opinion regarding the content of the bond proposals than public opinion of public transportation as a whole.

“I don’t know that I would take away any message for eternity from the failure of a measure, only that it really didn’t have the support it needed at that particular moment, because we have seen in other places that when measures are re-presented to the electorate, they sometimes are successful later,” Sciara said.

Disclosure: Capital Metro, Houston Public Media, Rice University, the University of Texas and Via Metropolitan Transit have been financial supporters of The Texas Tribune, a nonprofit, nonpartisan news organization that is funded in part by donations from members, foundations and corporate sponsors. Financial supporters play no role in the Tribune’s journalism. Find a complete list of them here.

Correction: An earlier version of this story misstated the sales tax rate that the transit authority in San Antonio receives.

Obituary: Ronda Lynn WigginsDo you plan to vote in Texas’ November elections? The time to register is now