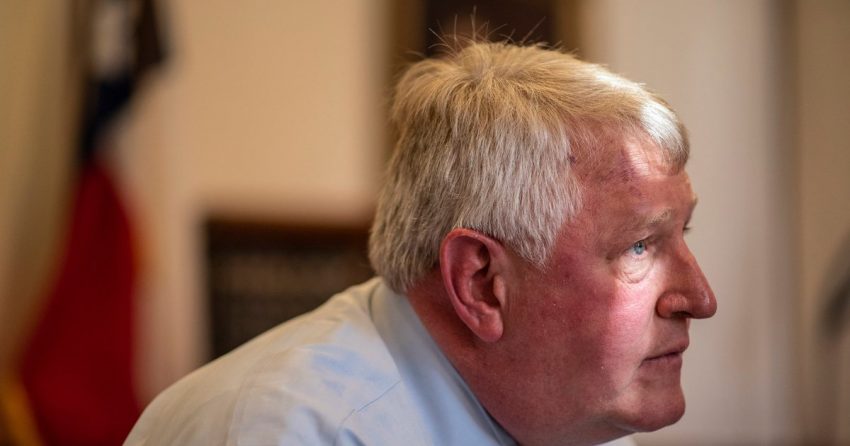 Texas’ new secretary of state says he wants to “restore confidence” in the state’s elections, despite a background that includes helping former President Donald Trump challenge the 2020 presidential election results in Pennsylvania.

In an interview Thursday, John Scott said there’s no question that Joe Biden is the president and he has “not seen anything” to suggest the election was stolen, as Trump has falsely claimed. There has been no evidence of widespread voter fraud last year in Texas or nationwide.

But Scott stopped short of agreeing with a deputy under his predecessor who called the 2020 election in Texas “smooth and secure.” He did not want to get ahead of an election audit of four of Texas’ largest counties, which he called his top priority.

Scott said he got involved in the Trump election lawsuit because it centered on an “intriguing” legal issue — and that he bowed out days later because a federal appeals court ruling “killed” the case.

As for why Texans should trust him, Scott said he hopes they will give him a chance.

“I think proof’s in the pudding ultimately,” Scott said, speaking inside the secretary of state’s office at the Texas Capitol in Austin. “I think [Texans] should hope for somebody that only follows evidence and that is able to restore confidence amongst all voters.”

Scott spoke with the Tribune a week after Gov. Greg Abbott announced his appointment, drawing national attention due to Scott’s involvement in the Pennsylvania lawsuit. The Fort Worth lawyer has a long history with Abbott, including serving as deputy attorney general for civil litigation when Abbott was the state’s top law enforcement official.

Abbott has for weeks faced intense pressure from Trump and some Texas GOP officials to prioritize legislation providing a process for party officials to trigger election audits. Abbott ultimately allowed the latest special legislative session to end without supporting any audit bill, but at his discretion, the secretary of state’s office announced a “forensic audit” of the 2020 election in four of the state’s biggest counties.

In naming Scott to the post, Abbott said he will oversee the “biggest and most thorough election audit in the country.” Scott called the audit the “first and foremost thing” he is focused on.

The audit is coming despite Trump’s easy victory last year in Texas — and no evidence of widespread fraud in the state that would have changed the outcome. Scott acknowledged that “nothing we do or find is gonna change the fact that Joe Biden is the president of the United States.”

In declining to label the Texas election as “smooth and secure,” Scott said he was withholding judgment due to the audit.

After Abbott announced Scott’s appointment, his role in the Pennsylvania lawsuit prompted swift criticism from Democrats and voting rights advocates.

State Sen. Carol Alvarado of Houston, who chairs the Senate Democratic Caucus and sits on the chamber’s Nominations Committee, said at the time that her initial impression of Scott’s appointment was “extremely alarming.”

“I think the most obvious [concern] is that this person gained notoriety by representing Donald Trump in court during the attempt to overturn the 2020 election, and this is not the kind of person, the political type of appointment — this political hack of an appointment — that we need,” Alvarado said.

Scott said he was asked to get involved in the Pennsylvania lawsuit by people who were already on the legal team. A key hearing was approaching, and Scott said “another firm that had received some pressure from its clients” had bailed on the case, likely referring to Ohio-based Porter Wright Morris & Arthur.

“[The remaining legal team] needed somebody that could stand up and go articulate the case to the judge,” Scott said.

The lawsuit did not contain any evidence of voter fraud, according to the Associated Press, but a “smattering of allegations.” Scott said he was intrigued by the lawsuit’s claim that several counties — “Democratic-heavy counties,” according to the lawsuit — broke the law by identifying defective mail-in ballots before Election Day and letting voters fix them so they could be tallied.

Shortly after Scott joined the case, though, the 3rd U.S. Circuit Court of Appeals ruled in a separate case that private citizens did not have standing to bring the claims at the center of the lawsuit. If anyone had standing, the court said, it would be the Pennsylvania General Assembly. The Pennsylvania lawsuit was filed by two voters in addition to Trump’s campaign.

Scott said that ruling is why he moved to withdraw from the case, a motion that was granted. State Sen. Bryan Hughes, R-Mineola, who was working with Scott at the same law firm at the time, also dropped out of the case.

“It was probably the right time for different lawyers to come involved at that point in time, as I saw the case,” Scott said, calling it an “amicable departure, completely.”

Asked if he thought the election was stolen, Scott replied: “President Biden is the president of the United States. I don’t think there’s any question about that.”

Pressed on whether he accepts there has been no evidence that the election was stolen, Scott said he has “not seen anything that somebody’s reported on — not seen any reports that I have seen personally.”

Trump, who is close with Lt. Gov. Dan Patrick, has taken a keen interest in Texas politics this fall. He has not only lobbied Abbott for the audit legislation but attacked House Speaker Dade Phelan, R-Beaumont, for allegedly blocking it — and made a series of early endorsements in 2022 races here.

That has left some to wonder if Trump had any say in Scott’s appointment. Scott denied he spoke with Trump or anyone on his behalf before accepting the position of secretary of state.

In prioritizing the audit, Scott is diving headfirst into a project that has been rife with confusion — and politics — from the start.

The secretary of state’s office announced the audit in late September, hours after Trump released an open letter to Abbott asking him to add a bill for the “Forensic Audit of the 2020 Election” to the third special legislative session. The office said the audit would cover Harris, Dallas, Tarrant and Collin counties.

The announcement caught election officials in some of those counties off guard, and it was not until five days later that the secretary of state’s office released more details. Even then, it looked like the audit covered some of the standard post-election procedures that are already required of local officials.

Scott argued the audit was far more sweeping than anything the secretary of state’s office has undertaken previously.

“It’s a much more full-throated, soup-to-nuts evaluation of everything that … the counties are required to do,” he said. “I guess the difference is the breadth of this one, versus in the past it was very ad hoc and really based upon” specific issues that were raised after an election.

At the same time, Scott sought to assuage concerns that the audit would be overreaching. He said his office is not out to create “new information” and “won’t be seeking anything from any of these folks that is not covered by statute” already.

Trump has not been satisfied with the audit announcement, continuing to agitate for legislation and making life difficult for Abbott, who Trump has endorsed for reelection. Abbott has resisted the push for audit legislation, defending the effort by the secretary of state’s office as superior.

Scott echoed that, saying his office’s audit “goes so much further” than any legislative proposal does.

In the audit details that were released before Scott was appointed, the secretary of state’s office said the audit would be conducted in two phases, the first already underway and the second set for spring 2022. Scott said he had “no timeline” for the audit but that he was treating it with urgency.

Abbott announced Scott’s appointment two days after the end of the third special legislative session. That means the Senate will not have to confirm him until the next time it meets, which is currently scheduled for January 2023.

Between now and then, Scott will be responsible for overseeing the 2022 election, when Abbott is on the ballot for a third term.

Abbott’s two previous picks for secretary of state both resigned before they could be confirmed by the Senate. David Whitley resigned at the end of the 2019 regular session amid the fallout from overseeing a botched effort to scour the voter rolls for supposed noncitizen voters, which threatened the voting rights of thousands of naturalized citizens. And Ruth Hughs stepped down at the end of the latest regular session, in May, after the Senate took no action on her confirmation.

While the reason for Hughs’ snub was less clear, her elections director, Keith Ingram, had told lawmakers earlier in the year that the 2020 election in Texas was “smooth and secure.”

Scott said he believes there is a “large learning curve for me” in the office but that he is committed to doing the best job he can do. Asked about his most relevant qualifications for the job, he pointed to his legal background, saying that being able to sort out evidence from “hearsay” should be valuable in conducting the audit.