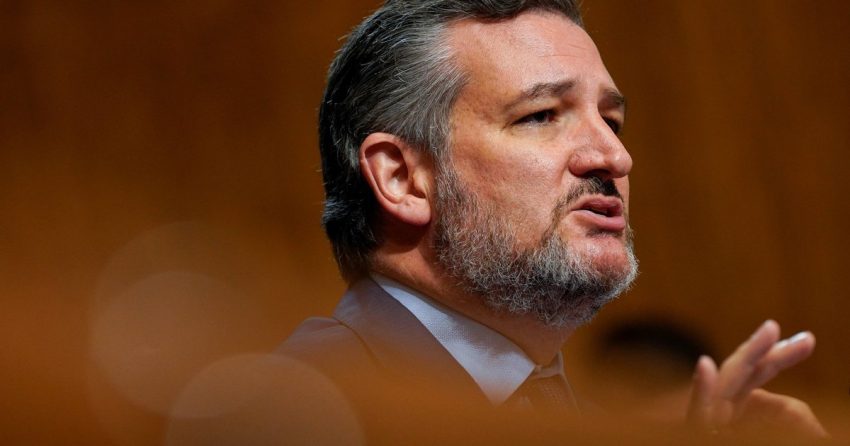 BY ABBY LIVINGSTON AND BETHANY IRVINE at The Texas Tribune, OCT. 27, 2021

WASHINGTON — By this point in the Trump administration, Kay Bailey Hutchison, a former U.S. senator from Texas, had been settled into her new Brussels-based post as NATO ambassador for several months. But Julianne Smith, nominated to succeed her by President Joe Biden in June, is still waiting in the wings for Senate confirmation.

The same goes for ambassador nominees for France, India and a number of other nations.

Why the holdup? U.S. Sen. Ted Cruz has single-handedly delayed dozens of key Biden administration nominees, mostly concentrated in the State Department, in retaliation for a Biden decision to drop U.S. opposition to a Russian pipeline to Germany.

At issue for Cruz is the Russian pipeline called Nord Stream 2, which runs from Russia to Germany by way of an underground route under the Baltic Sea. Several times in the Trump administration — in 2017, 2019 and 2020 — Congress passed sanctions intended to block the pipeline.

In mid-July, Biden agreed to drop opposition to the pipeline, which was nearly complete, as a means to improve the relationship between the U.S. and Germany.

The Nord Stream 2 pipeline will compete with pipelines in Ukraine, a country that continues to surface in deeply partisan disputes in the U.S. Members of both parties expressed anger at Biden for the move, but it gave Republicans — whom Democrats accused during the Trump era of going easy on Russia — a way to reset that foreign policy conversation.

Cruz by himself cannot completely block a nomination. However, he can dramatically slow down the process. Traditionally, uncontroversial nominees are confirmed via unanimous consent by the Senate. But Cruz’s objection forces the Senate into time-consuming procedural votes for each of the nominees.

The Senate has so far confirmed only four of Biden’s U.S. ambassador nominees to foreign governments, according to information gathered by Senate Democratic leadership and shared with The Washington Post.

Cruz did signal that he would lift his hold on Nicholas Burns, whom Biden nominated to serve as ambassador to China, per Bloomberg.

The Partnership for Public Service, which tracks nominations, reports that there are slightly more Biden confirmations at this point than in the Trump era. But the group’s founder and president, Max Stier, said in an interview that confirmations in proportion to the full slate of nominations are moving much more slowly than four years ago.

Even so, Cruz is creating consternation inside of the Treasury Department, at the White House and in international circles.

“It is essential that the Senate confirm these highly qualified nominees who are ready to get to work helping families and small businesses recover from the pandemic, and who are critical to the department’s national security objectives of disrupting illicit finance and combatting terrorism,” U.S. Treasury Department spokesperson John Rizzo said in an email.

White House press secretary Jen Psaki said last week the administration is “concerned about the obstruction of our nominees,” blaming Republicans. But she declined to single out Cruz when asked about the delays last week during a briefing with reporters.

“There have been unprecedented delays, obstruction, holds on qualified individuals from Republicans in the Senate,” she said. “So, I would say the blame is clear. It is frustrating.”

Stylistically, it’s a return to Cruz’s all-out opposition in the Obama era that frequently resulted in unpredictability in passing legislation and even a 2013 government shutdown.

In that instance, Cruz followed through on threats to push for a government shutdown if then-President Barack Obama insisted on funding his 2010 health care law. A government shutdown lasted 16 days. Republicans took a brief hit in polling, but Cruz emerged as a national figure with the GOP base ahead of his 2016 presidential campaign.

“This risks being hyperbolic, but it’s like negotiating with a terrorist,” U.S. Sen. Chris Murphy, D-Connecticut said about Cruz’s holds on nominees to The Washington Post. “He is not the secretary of state. The people of this country did not elect him or his party to represent us abroad. And what he’s asking for is to control American foreign policy.”

Stier said senators have long used holds as leverage for policy demands, but suggested it is a less-than-ideal approach to governance.

“It’s damaging,” he added. “Is Sen. Cruz unique? I don’t know if I can answer that question. There are other examples of other senators in this current setting who’ve held up nominees that are related to the department in which they’re going to work and sometimes not.”

But the political strategy comes with risks.

Stier pointed with alarm to the 9/11 Commission Report that stated that the government might have been able to fend off the Sept. 11, 2001, terrorist attacks had more confirmed individuals been in place. Stier said that on that date, former President George W. Bush had 57% of nominees in place. On Sept. 11 this year, Biden had 26% of his nominees in place.

Presidents prior to President Donald Trump had much easier paths to confirmation for their diplomats. But according to the Partnership for Public Service, the Senate slowed down the pace of confirmations when Trump took office. Republicans controlled the Senate then, but Democrats easily had the 40 votes needed to block a confirmation vote.

With Democrats trying to move nominations this time around, Republicans are exacting political payback in slowing down the Biden nominations.

When asked how he would handle being on the other side of a senator’s hold on nominations should he ever become president, Cruz defended his actions.

“It depends on what the basis for the hold was,” Cruz said. “In this instance, my holds are in place to pressure the administration to follow the law.”