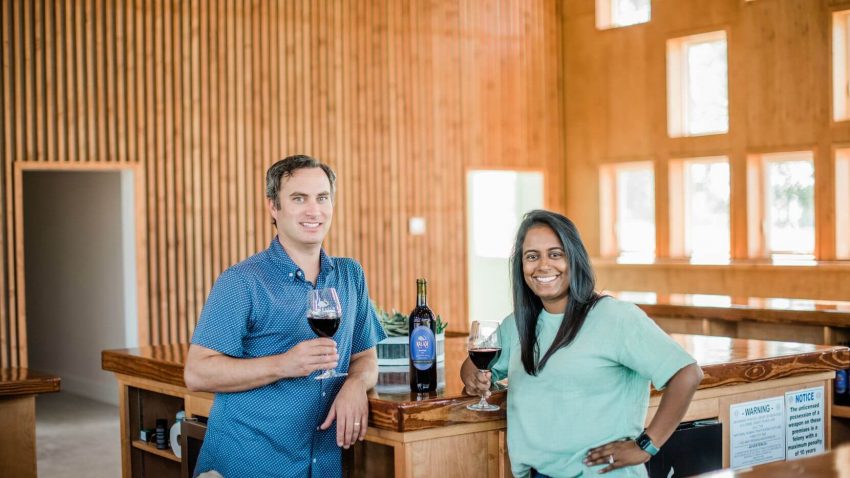 By Tina Danze at the Dallas Morning News, September 22, 2020

When former Dallasites Greg and Nikhila Narra Davis set out to make Texas wines, they had an inside track for sustainably farmed grapes.

Nikhila had been growing grapes with her family in the Texas High Plains AVA since 2014. She helped her father found Narra Vineyards, a 140-acre estate that grows grapes for 26 Texas wineries, including William Chris Vineyards, Calais Winery, and Inwood Estates Winery.

In 2017, Nikhila and her husband Greg, of Dallas, launched Kalasi Cellars, to make wines with grapes from their family’s estate. Last month, Kalasi debuted the wines at its stylish, new tasting room in Fredericksburg. To skirt the pandemic-era prohibition on bar openings, Kalasi serves enough food to remain open as a restaurant.

Kalasi’s wines include a light and earthy sangiovese, a jammy malbec, and a richly textured roussanne, as well as lesser known varietal wines, including carmenere (the signature grape of Chile) and teroldego. The latter is an inky, syrah-like grape that has experienced a revival in recent years, thanks to a woman winemaker in the grape’s native Trentino-Alto Adige region of Northern Italy. Despite teroldego’s obscurity, it has been well received in Kalasi’s tasting room.

“We have people who drive for hours just to taste it,” Greg says. Kalasi’s unfiltered version has flavors of dark cherry, over-ripe plum, and blackberry with hints of tobacco and vanilla.

Kalasi is the only Texas winery producing carmenere and teroldego varietal wines. “After doing research on what grapes we should plant, we brought varieties to the state that hadn’t been tested, but that would theoretically do well here,” Nikhila says.

The couple’s hunch about Carmenere and teroldego proved correct for Kalsi’s 2017 debut vintage, and those that followed. “Last October, we had two touches of frost, which made it a challenging season. Some varietals didn’t produce as much, but we noticed that the Carmenere and teroldego did really well after those frosts. They were uniform, good-sized berries, with good cluster weights,” Nikhila says.

Kalasi’s winemaking has deep roots in vineyard management. “Being from the farming side, our number one goal is showing what can be done in the vineyard,” Nikhila says. Minimal pesticides, no herbicides, and pruning practices that keep yields low are pillars of Kalasi’s vineyard philosophy.

“This year, we sprayed no pesticides,” Nikhila says. The couple also invested in a state-of-the-art harvesting machine that sorts for optimally sized fruit, and needs no chemicals for cleaning. “Bringing in good fruit spills over into the winery. You don’t need to use as much sulphur, and the low yields give the sugar and acid levels that we want,” reducing the need for tartaric acid, Nikhila says.

Nikhila, a first generation American, says her farming roots go back generations in her parents’ native India. She spent her first six years living on her grandparents’ farm in India, while her parents established themselves in the U.S. After launching Narra Vineyards with her father, Nikhila knew that she wanted to make wine, so she went to California to learn.

“I ended up working harvest at Cakebread Cellars in Napa — it was all cellar work,” she says. Upon returning to Dallas, she met her husband, Greg, who held an MBA from SMU and worked as a management consultant for Pricewaterhouse Coopers. His business acumen helped Nikhila take the plunge into winemaking. Nikhila, who pursued her oenology certification through University of California-Davis, handles Kalasi’s winemaking, with consulting help from John Rivenburgh. Greg runs all the business operations.

Kalasi’s tasting room brings some of Nikhili’s Indian heritage to the table: besides cheese and charcuterie, there’s an Indian snack sampler, which includes masala peanuts and boondi ― a fried, salty snack made with chickpea flour. Tikka masala pizza and samosas will roll out next week.

“I was excited to bring Indian influences to the menu. At first it was nervewracking, because Indian food is notoriously hard to pair with wine. But people like [the Indian flavors]. They pair really well with our white wines,” she says.