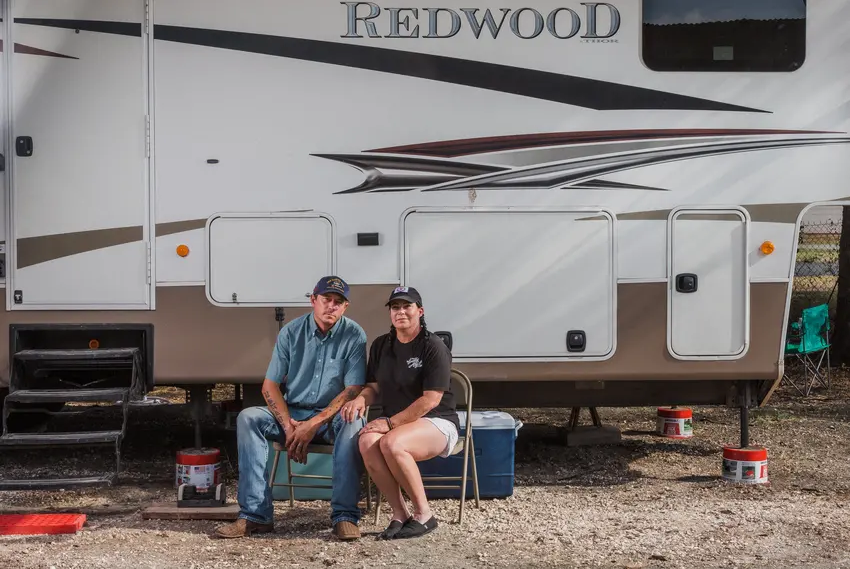 Holly Jackson has spent 20 years working for the Austin nightclub Barbarella, where crowds of customers danced and drank until the early morning hours.But for months, there’s been no music or cocktails at Barbarella. And Jackson and around 30 of her employees have been furloughed.

“I have no idea what’s gonna happen to me, honestly,” said Jackson, the bar’s general manager. “I feel like I’ve lost my right arm. I have no family. I have no kids, no husband. My entire identity in life was Barbarella. And now that’s gone.”

Gov. Greg Abbott has shut down Barbarella, along with the rest of Texas’ bars, twice — once in March and again in June — in an attempt to stem the spread of the coronavirus. There is no end in sight for when bars will be allowed to reopen, leaving those business owners and their workers worried about how long they can hang on until they lose everything. In some cases, bar owners are planning to reopen anyway in a desperate attempt to generate some income — and draw Abbott’s attention.

Jackson joins thousands of service industry workers who have filed for unemployment, with restaurant and bar workers leading the state in number of claims. About 12.5% of the 3.2 million unemployment claims filed in Texas between the beginning of March and early August have come from workers in the accommodation and food services sector.

While some bars can serve to-go items or reopen as restaurants, both of these options require them to have a permanent kitchen, excluding many bars across the state. Chris Porter, a spokesperson for the Texas Alcoholic Beverage Commission, said about 6,600 active businesses were required to close under the order.

Jackson said she feels abandoned by the state and is frustrated by the “radio silence” from the governor. Abbott addressed the shutdown last week, expressing sympathy for employees put out of work. But he said the closure would need to continue until coronavirus metrics improve significantly — with the state’s positivity rate dropping below 10% for a sustained period of time and the number of hospitalizations decreasing.

But many bar owners say their businesses might not survive that long.

Last month, Elizabeth McNiel was forced to move into an RV along with her husband and 14-year-old son behind Ironwood Saloon in Sabinal.

Her husband was the bar’s general manager, and now they’re relying on her income as a school teacher to scrape by. They’ve depleted their savings and maxed out credit cards trying to keep their dream of owning a bar afloat.

“I don’t want to lose a dream that we’ve had for years,” McNiel said. “But on Sept. 1, I will have to close these doors for good.”

The TABC recently allowed some bars and other businesses with high alcohol sales to reopen as restaurants after they applied for food and beverage certificates. However, this workaround requires businesses to have an onsite kitchen and keep alcohol sales under 51%, which excludes many bars across the state and is sometimes cost prohibitive.

Kim Finch owns two bars in Dallas, but neither has a kitchen. So she’s going all in on a third bar — a lease she signed before the pandemic began —that is under construction with a kitchen that will allow it to open as a restaurant.

But even once it’s open, she doesn’t know if it’ll be enough to offset her losses.

“I have absolutely no way to make any income or revenue to pay all the bills, taxes, rent that are due. I can’t provide jobs for my employees,” she said. “I have no way to save my businesses that I’ve worked 17 years to build. And I’m afraid I’m going to not only lose my businesses but lose my house.”

Finch has cashed out all of her investments and her life insurance policy and has depleted 15 years of savings. It’s money she won’t get back even if her businesses survive. She tried opening a pop-up market but was told that wasn’t allowed because even without alcohol, her business was still a bar.

“It’s disheartening. It’s frustrating. It’s maddening,” she said. “I understand there was bad bar operators, too, that were not adhering to guidelines, but it sucks for the ones that were trying really hard to be safe.”

Some bar owners say they have no choice but to open in defiance of the state moratorium.

Hundreds of bar owners across the state participated in a demonstration late last month called Freedom Fest, intended to prove that they could open safely. As a result, 16 bars’ liquor licenses were suspended.

Chris Polone, the event’s organizer and owner of the Rail Club Live in Fort Worth, said the event adhered to strict safety precautions — limiting capacity to 25%, requiring masks at all times and enforcing social distancing.

And last week, around 100 bar owners gathered to protest near the TABC office.

But Polone said the group hasn’t been able to discuss the situation with anyone from the TABC or from Abbott’s office.

So now, Polone said some bars are making plans for another unified reopening Aug. 29 dubbed Come and Take It.

“We don’t have a choice. Our livelihoods are on the line,” he said. “We’re opening and we’re not closing back down.”

The hope is that if enough bars reopen, the TABC will be overwhelmed and unable to enforce the shutdown order, Polone said.

Polone said he will be selling small ownership stakes of his business instead of tickets to his customers — since he says owners of the bars are still allowed to be inside.

“We’re not selling cover charges,” he said.“We’re making everybody an owner.”

A. Bentley Nettles, executive director of the TABC, addressed rumors of bars reopening in an Aug. 7 letter to the industry.

“Recently we have spoken with business owners who tell us they don’t intend to follow the orders. On that note, I want to remind every member of this industry that it is a privilege to be in the alcoholic beverage business in Texas,” Nettles said in the letter. “When a business tells TABC it doesn’t intend to follow these orders, you leave the agency with no option but to revoke your license and shut you down.”

Porter said any business that defies Abbott’s order will first face a 30-day suspension of its license to sell alcohol. Second offenses will result in a 60-day suspension, with third offenses leading to “stronger actions up to and including cancellation of the permit.”

About 90% of National Independent Venue Association members report that they will close permanently in a few months without federal funding, according to an internal survey. Many bars have doubled as music venues and vice versa.

“I haven’t had a paying gig since Feb. 11,” Austin drummer Mike Webb said. “Nobody I know has gotten any gigs.”

Some of his musician friends have moved on to other jobs. One is a janitor now. Another is working at a grocery store.

According to the Austin Chamber of Commerce, 83% of the city’s live music venues and 70% of the restaurant and bar owners reported in a survey that they had to lay off full-time employees.

“Most of those businesses indicated that if something doesn’t give in the next few months, that they are at risk of closing their doors,” said Laura Huffman, CEO of the Austin chamber.

Lack of collaboration from Abbott

“You can go into a restaurant and you can drink, you could buy a $10 hamburger and fries and you could order three drinks,” Schaefer said. “You could sit there and have your drinks and eat your hamburger, without a mask. Tell me how that’s any different.”

He said there’s been a lack of collaboration among lawmakers with both Abbott and with the TABC.

“From the beginning of this crisis, TABC has worked closely with stakeholders to assist struggling businesses and at the same time protect the health of Texans,” he said. “We’ve also worked directly with industry members and state lawmakers to find ways of assisting businesses.”

Schaefer said lawmakers will have to look at options in the upcoming legislative session, which begins in January, to find ways to offer relief to the food and beverage industry.

“We’ve got to find economic relief for this industry when you have livelihoods essentially being destroyed by government order,” Schaefer said, adding that it’ll be a challenge due to a constricted budget.

State Rep. Erin Zwiener, D-Driftwood, said she’s unsure that indoor dining of any kind is a good idea right now and believes that a lot of the COVID-19 cases that came on the heels of Texas’ phased reopening could be tied to restaurant and bar activity.

But Zwiener lamented that there has not been enough collaboration between Abbott and lawmakers. Abbott did not respond to requests for comment.

“I really wish Abbott would work more closely with legislators, but his, his circle seems to only get smaller,” she said. “Absolutely legislators are, by and large, not at the table, and that seems to be a bipartisan frustration.”

For Jackson, the general manager of Barbarella, the hardest thing to grapple with is that she has no idea what comes next. She’s running out of options while waiting for something to change.

“I have mentally in my head prepared myself to have to lose my house and probably move back home to Orlando with my mom at 40 years old,” she said. “It’s scary. I did what I was supposed to do. I went to college and worked my ass off at the same job, bought a house, and now it’s all being taken away for something that I didn’t do.”