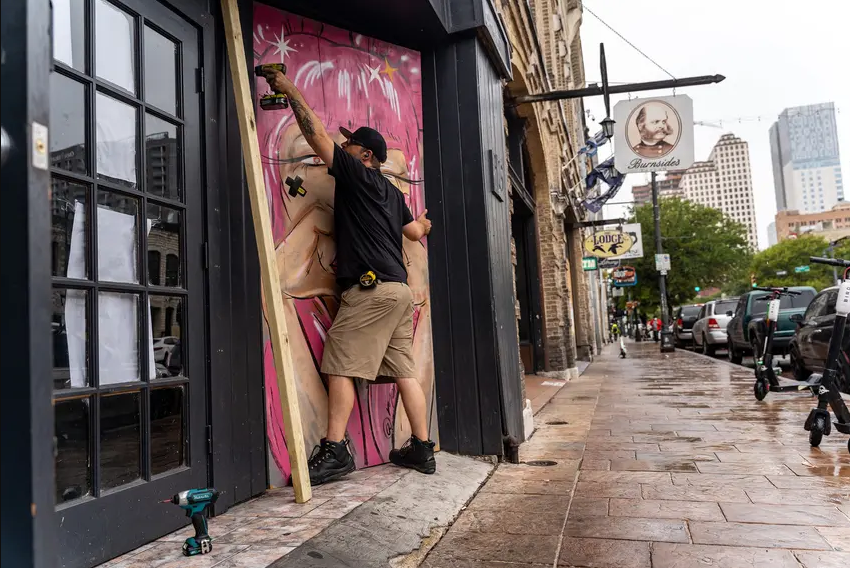 By Mitchell Ferman and Meena Venkataramanan at Texas Tribune, August 19, 2020

It’s been 11 days since President Donald Trump issued an executive order that he said would add $400 to people’s unemployment checks to help them weather the coronavirus pandemic. But jobless Texans expecting the weekly benefit still don’t know if they will receive the money.

Confusion over the payments has persisted as the state and the federal government has not said when or whether those funds will be available in Texas. Trump announced the extra money in early August, but questions remain over whether his executive order authorizing it was legal and whether states will be able to afford to implement it.

In the ensuing days, the state agency in charge of unemployment relief, the Texas Workforce Commission, has not had answers for unemployed Texans seeking the benefits. The agency “is waiting on further guidance from the U.S. Department of Labor and will provide additional information as soon as it becomes available,” spokesperson Cisco Gamez said in a statement Wednesday.

In just the first week of August, 51,476 Texans filed applications for unemployment relief. In total, 3.2 million Texans have filed for jobless assistance since the pandemic began.

Congress passed a broad coronavirus relief package in March that added $600 to people’s weekly unemployment checks. Since then, the pandemic has gotten worse — with more than 10,000 Texans dead as a result of COVID-19. Gov. Greg Abbott again closed bars in the state in June, and many businesses remain closed or have significantly curtailed operations.

Still, the extra payments expired in late July, and the president and both parties in Congress have been unable to come up with a deal to reauthorize them.

Anissa Dwiggins, a single mother from The Woodlands who has worked at an extracurricular program for Houston-area children since 1998, relied on those $600 payments to support herself and her two children. The weekly assistance helped her pay for her mortgage and car payments. Now that it has expired, she has had to dip into her savings, she said.

“Everything’s kind of just come to a halt,” Dwiggins told The Texas Tribune.

Dwiggins had questions about the gridlock in Washington over the jobless payments, echoing some of the bipartisan questions coming from governors across the country.

“It’s that waiting game that’s been the most frustrating thing through all of this, whether it’s the business or my own personal finances,” Dwiggins said. “Like, is the executive order really going to happen? Congress took a break. Are they coming back? Are they going to make this decision? Can Texas put that other $100 in there?

“So all of those things I feel are still kind of scattered in the wind right now. When the dust settles, I’ll be able to really sit down and say, ‘OK, if this is how much I’m getting, this is how long I can sustain putting food on the table.’”

When Trump issued his executive order for the $400 on Aug. 8, he said that it would only become available if states administer the funds and provide $100 of the amount. But governors across the country have warned that they don’t have the capacity to administer the program.

And projections indicate that Texas already faces an enormous looming budget shortfall, raising questions about whether the state could afford to chip in. The Trump administration later acknowledged that states might not have to provide the $100, which would mean the extra benefits that unemployed Texans would receive would drop to $300 a week.

Larry Stuart, an employment lawyer in Houston, said he was unsure how the state could come up with the extra money for the massive number of jobless Texans seeking relief.

“And it’s unclear how it’s being administered,” Stuart told The Texas Tribune.

The Federal Emergency Management Agency has already approved 11 states — not including Texas — to provide $300 per week to people unemployed due to the coronavirus.

The Democratic U.S. House has passed a bill that would authorize more $600 weekly payments funded by the federal government as part of a huge and sweeping $3.4 trillion package. But Republicans in the Senate have pushed for a narrower proposal and have accused Democrats of holding extra payments hostage in negotiations.

“I am hoping with the decision that was made with the executive order, and I’m unsure if it went through, but I’m hoping that it does and I’m hoping that $300 to $400 is there,” Dwiggins said. “I’m relying on it. I think it’s going to be absolutely helpful. If that amount isn’t there, then I’ll be way more affected, of course. I am fortunate enough that I have a small amount of savings that I can supplement a little bit, but it’s that I feel like I’m just teetering on the brink right now.”

COVID numbers improve, free testing set for Aug. 24Texas bar owners and employees are on the brink of losing everything