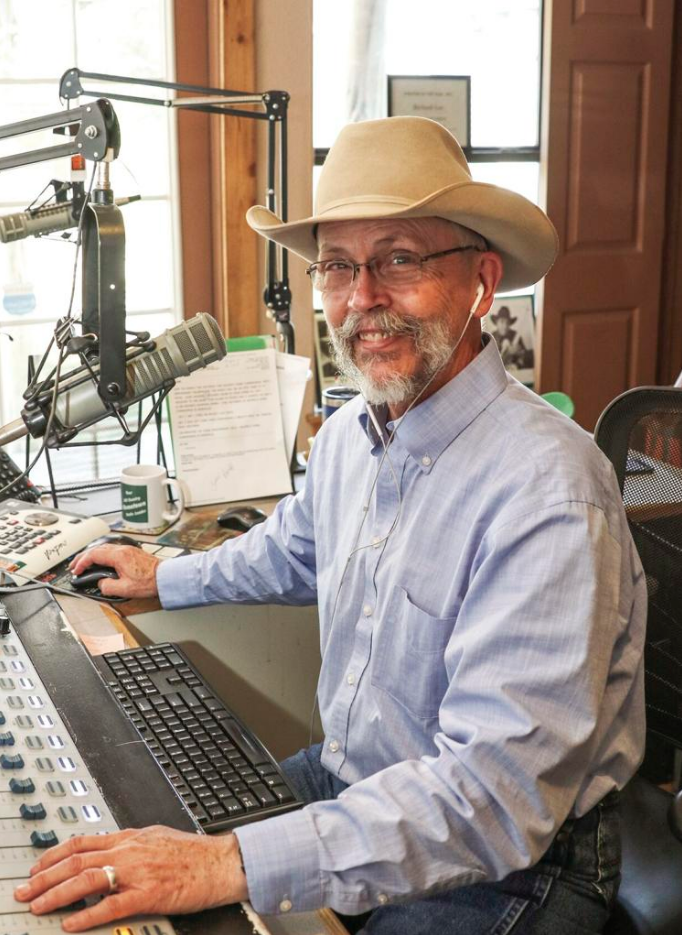 “I’ve had an incredible career, 47 years in radio. I started at a college radio station where I also helped build the station,” Richard Lee of Ranch Radio said, in his last week in the studio. “But my first really big job was with the Buck Owens family in California.”

Lee said Owens and his sister put Lee on the radio, all kinds of shows, overnights, a.m.’s, afternoons.

“They had their offices in an old theater mega-building, and Buck Owens had a music studio in the same building,” he said.

Lee said after he started working there, he later had radio jobs in Cheyenne, Wy.; Milwaukee, Wisc.; and Phoenix, Ariz.

Lee said Owens owned station KNIX, Phoenix, and helped set the standards for other radio station operations, winning a “Station of the Year Award” along the way.

“They already were working with ABC Radio,” he said. “You have to remember, in the 1960s and ‘70s, country music had mainly a male audience. Then they started changing the music to target women. The ‘Real Country’ network came from that.”

Lee worked with Owens and his “Crystal Palace,” the ABC radio networks, and with Mickey Gilley in Las Vegas, he said.

He recounted how singer Eddy Arnold came to Phoenix and appeared on Lee’s radio show.

“In the 40’s, he had number one songs, one after another for more than 10 years. My question to him was, ‘What would have happened to you if that first song hadn’t taken off like it did, or the second one?’ And he said, ‘I don’t know. My mom and dad were sharecroppers. I wanted to get them out of the fields. I guess I would have gone home and helped pick cotton,’” Lee recalled, adding his famous guest was beginning to cry as he finished the story.

“When I told my boss, ‘I made Eddy Arnold cry’ and expected to be reprimanded, he said, ‘Good job!’”

Also among good memories is a session to interview Waylon Jennings and Tammy Wynette, for an album launch.

Lee said the interview was set in Jennings’ home with Wynette as a guest; and Lee was surprised no awards were displayed, only a small photo of Jennings with singer Bebe King.

“Everyone told me that George wouldn’t talk, but Tammy would. I showed them an old photo of them when they were married to each other; and George was surprised enough to start talking, first to her, then to me,” Lee said.

Lee said the network sent him and others to Nashville to a big event; and that broadcast was heard on KRNH in Kerrville.

“I’ve flown all over the country to be on other stations. I worked on board the Disney Cruise Line; and once we did a show on board the empty USS Nimitz one July 4th. We did one show in New York City, in Manhattan, with country singers, and had fans there from all kinds of other genres.”

Lee remembers singer Lee Ann Rimes who began at age 13 with a number-one record and never looked back; and Taylor Swift who started in her early teens, too, accompanied by her mother to early interviews. Lee called her “a delightful young lady.”

He said through Owens, he met Merle Haggard, the Oakridge Boys and Glen Campbell.

“Once we went to Branson, Mo., to do a live show with Glen Campbell in his theater there. They set up the interview in the lobby for right after his show. When it was over and he came out, the audience followed him right out the doors, to stand there and watch,” Lee said. “And Pat Boone found out what we were doing, and came over from his theater and agreed to an interview. I didn’t have a chance to do any research on him, only what I had in my head. I asked one right question and ‘connected the dots.’ And when it was done, he complimented me on the interview.”

Lee also did another interview in Branson with singer Andy Williams.

“Singers with long-term shows there had homes built into the backs of the theaters. Andy Williams’ home was made of marble,” Lee said. “He was a very kind man.

“I had a lot of ‘moments’ that just happened. And you have to be the ‘radio person’ when it does, not a fan. Artists deserve a good interview; and if you start one and it’s not going well, you stop it. I only did that once. I always felt I myself deserve to have a good interview, too.

“But the best part has been, being here at the Ranch.” Lee said. “The Owens family was instrumental in my career. They defined my path.”

He plays guitar and mandolin, and played in a Bluegrass band.

Lee said he worked in a Phoenix station with country format. But that’s where Lee’s connection to Kerrville and the Texas Hill Country began.

In 1996, Lee said, Kerrville’s Mark Grubbs had a radio station here; and listened to Lee by satellite. And on Grubb’s invitation, Lee visited Kerrville with his wife.

He liked what he saw and heard; and he and his family moved to Kerrville seven years ago.

In the years since, Lee said in addition to hosting the Ranch Radio show starting at 5:30 a.m., he has been emcee at parades and other events; done auctioneering, worked livestock shows and helped judge queen contests at such events.

“Wherever I can find a microphone …”

Lee said Grubbs wanted a Hill Country-wide radio station, with a format that could “own” listeners in Bandera and Boerne; and now their reach extends from Doss to Spring Branch – “our hometowns,” Lee said, “We work to pull the ‘agri-hood’ together, but not only the ‘agri-hood’ but the big ranch-houses, that are a culture of their own.”

He said the Ranch Radio group has become that culture community on air.

“I’ve emceed Wild Game Dinners; and you see everyone you know at the Stock Shows.”

Lee said he was raised in Green City, Mo., and from first grade on, had experience with nearby agriculture association events.

“When I was 5, I was in the audience at the Don McNeel Radio Show in the 60s. The host asked each kid our names, and I shouted ‘Me!’ at the host. My teacher was humiliated, and hauled me to my father’s office for punishment, and left. And he said, ‘Good job!’ That’s where it started for me.”

Lee said, at retirement, he counts as important his association with Coach Jerry Moore of Center Point, who “introduced me to everyone at a Stock Show;” and Scott “Hangtime” Hainline, “very knowledgeable and very hometown.”

Lee said he feels he’s done everything in radio, and called himself a “facilitator” in the service department of entertainment.

“I knew I always wanted to work at the biggest station in America. At one point, I had 1.5 million listeners on ABC Radio Network Country, owned by Disney.

“I had a bucket list; and I think I’ve done everything twice. It’s the entertainment business. It was time.”

Lee said seven years ago when they moved here, he told his wife he loved radio and auctioneering. She encouraged him to get an auctioneering license.

He took 81 hours of class work, and passed required tests. Auctioneers are required to collect proper sales tax, “the business of it,” he said.

He met Mike Kropp of Kerrville at the training, before moving here; and now Lee is the back-up auctioneer for Garrett Auctions, too.

He’s also emceed parades, based on his knowledge of the town and everybody in it.

Lee and wife have a daughter in Austin with three children; and a son in the Dallas area with two children. The grandkids range from ages 2 to 11.