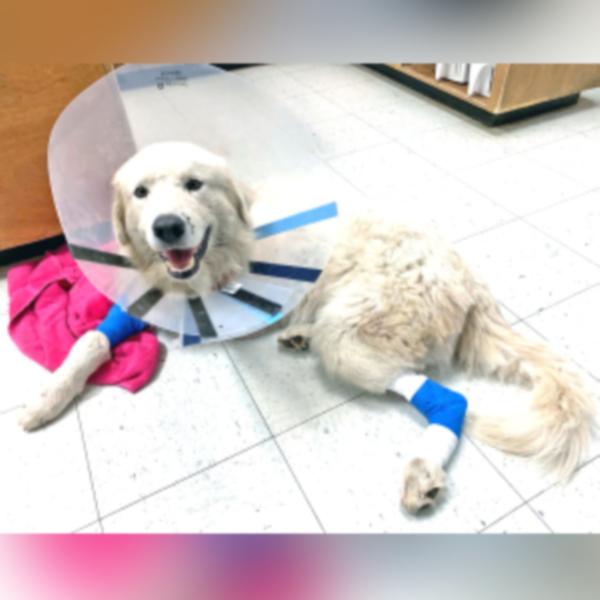 The Humane Society of Uvalde’s Flights to Furever program is in dire need of pet foster parents and requesting donations to assist with a surge of injured dogs and rescued puppies, some of which were found in taped-up boxes after being left to die in the cold.

Heather Stunkel started the Flights to Furever program in 2013 to rescue, foster and transport homeless animals to western New York for adoption. She says they have now rescued over 1,600 animals.

“People continue to amaze us in their cruelty… we are faced every day with stories of abuse and indifference to suffering,” Stunkel said.

One such incident occurred early Thursday morning, when two taped-up cardboard boxes were found by the school in Brackettville, left near pens of pigs the students raise. One box contained a dog with four newborn puppies, and the second held two older male dogs.

On Wednesday night, the temperature dropped to about 35 degrees. A police report is being made regarding the incident.

“We have a volunteer who lives in Brackettville, she was contacted by the lady who found them,” Stunkel said. She immediately began seeking foster homes for the animals, and program volunteers stepped up to house the dogs.

“We have sent 640 animals to our New York rescue partners in 2020. We have approximately 50 animals in our care at any given time waiting for transport and a long waiting list from the community of others in need of help,” Stunkel said. “It’s been crazy lately with medical cases and such.

“We have taken in a dog who was shot, a dog who was caught in a snare with nasty lacerations, just yesterday two pregnant mom dogs, and had two pups break with parvo, and more,” she continued. “The list is endless.”

All responses are fueled by community support and volunteers.

Though foster homes are the biggest need, Stunkel said the program can also use monetary donations and supplies like heat lamps and dog houses for those fosters that reside outdoors.

She noted that outdoor housing is not ideal, but the rescued animals are kept safe, and volunteers strive to keep the animals as comfortable as possible.

Family court judge Kelley Kimble and her husband, Travis, foster pets for the Flights to Furever program. They specialize in puppies, but, lately, they have also been running a bit of a canine infirmary, housing wounded dogs.

“Dudley was caught in a trap on a ranch off of U.S. Highway 55. A sheriff’s deputy got the call on Nov. 27 and then called Heather,” Kimble said. “Heather brought him to me. We bandaged him as best we could and got him to the vet on Monday. He required staples almost all the way around his shoulder and neck.”

Convalescing at her home, Dudley, a lab with a handsome chocolate coat, mesmerizing eyes and an underbite, is improving by the day.

“He is the happiest, silliest dog I’ve ever met,” Kimble said.

The family is also housing an injured white Great Pyrenees, taken in shortly before Dudley.

“Basa was also discovered by a sheriff’s deputy.  He had been shot and limping on a shattered leg for several days. We made him as comfortable as possible until we could get him into the vet. Ultimately, his leg was amputated but he’s doing really well on three legs. His pictures don’t show it but he’s really a happy, sweet guy,” Kimble said.

On Wednesday, Stunkel sent out an urgent call for help for a pit bull mix named Mia who came into animal control obviously pregnant.

“We were full but we couldn’t stand by… We got them out as quickly as possible, but momma and pups were freezing,” she said, adding that the temperature was dipping to 30 degrees.

“Our amazing volunteer got to work on warming them up, and we all said a prayer. Nine babies for this sweet little mom and they all made it through the first night. We know they aren’t out of the woods yet, momma was starving herself and not producing much milk. We are working hard to change all that and support Mia as best we can. The look in her eyes says it all,” Stunkel said on Facebook.

Kimble, whose family also took in Mia and her nine pups, says they are doing well so far.

“Mom is sweet and a very attentive mom,” Kimble said. “Rescue is a never ending mission and I’m so grateful to be part of the small army in Uvalde that works so tirelessly to try and make a difference for these babies.”

Stunkel can be contacted on the Flights to Furever Facebook page, and any supply donations may be taken to Country Tails Bed and Biscuit, 1803 Garner Field Road. Checks made out to Flights To Furever may also be dropped off or mailed there.

For those in need of a cute stocking stuffer or gift for a friend, the program is selling Flights to Furever caps for $25, tree ornaments for $5, or custom laser-engraved dog or cat ornaments for $10.

Items can be purchased at Country Tails Bed and Biscuit, 1803 Garner Field Road, and the pre-made ornaments may also be purchased at Southern Lace Marketplace, 101 E. Nopal St. Every purchase helps local animals in need.