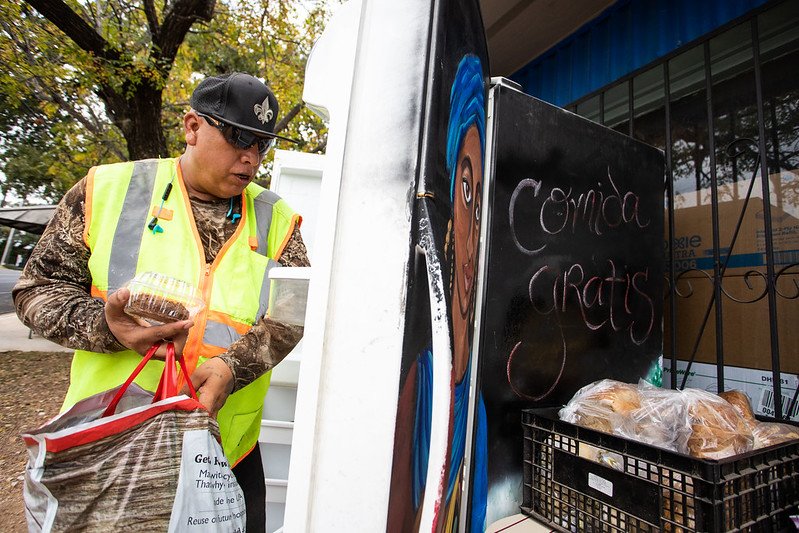 By Kristen Cabrera at the Texas Standard, October 30, 2020

It’s almost lunch time and Roy Coronado, his wife Jeannette and their 5-year-old daughter Arianna are outside Nixta Taqueria in East Austin.

The restaurant on 12th Street is closed but that’s OK because the Coronado family isn’t there for takeout. They came for the refrigerator outside of the eatery – the one with the words “Free Food” painted on its front.

“When we come here most of the time, we normally find stuff like eggs and milk and potatoes,” Coronado explained.

This is a part of the ATX Free Fridge Project. The owners at Nixta Taqueria volunteered to host the first fridge open to the public back in August, and Coronado, for one, is grateful.

“Because, you know what they did,” he said of the fridge’s owners as he choked back tears, “not only just helped my family put food on the table, but other people, too. That really means a lot to me; it means a lot to me because the struggle is real.”

The fridge and pantry next to it basically act like a giant “take-a-penny, leave-a-penny” bowl. Local farmers and restaurants drop off produce and bread throughout the week. Neighbors and others also leave what they can. Even Coronado brought food to share.

It’s this sense of community that inspired Nixta owners Sara Mardanbigi and Chef Edgar Rico to participate in the ATX Free Fridge Project. After all, their restaurant was only open four months before the pandemic hit. They are still open now, Mardanbigi reasons, because of that very community they are trying to help out.

“I think from the very beginning, there is sort of this idea of solidarity,” she said. “And that’s been the common thread throughout our first year. I don’t have all the answers. I don’t know what the future holds for Nixta. All I know is that people are really down and seeing just the physical manifestation of something like this Free Fridge has been really beautiful to see.”

Mardanbigi and Rico are both children of immigrants. Rico’s parents immigrated from Mexico, and Mardanbigi’s parents came from Iran. As entrepreneurs and partners they’ve chosen to invest their life here in Austin’s Eastside.

“So for us living in this neighborhood and seeing what we can do to try and combat some of those things like food insecurity. We’re a restaurant – how do we use our resources? How do we use our collective community?” Mardanbigi said.

East Austin, though highly gentrified, is still home to many minority low-income families – a group that is most likely to be food insecure during and before the pandemic, according to Patrick Stover, vice chancellor and Dean at Texas A&M University’s College of Agriculture and Life Sciences.

“Blacks and Hispanics had much higher rates of food insecurity than whites,” he said.

Poorer families who experienced a lack of consistent access to food or food insecurity are now facing bigger obstacles to put food on the table during the pandemic as more people find themselves out of work.

As a result, free food in community-supported fridges have been popping up in Texas. From Dallas and Houston to majority-Hispanic cities like McAllen and San Antonio.

Outside Nixta Taqueria, Coronado’s daughter Arianna stopped to open the fridge and help her parents. Picking a roll of ground breakfast sausage from the freezer she held it up proudly for them to see. The family had missed the most recent food bank pickup because Coronado was in the hospital. So the fridge adds just a bit more stability and peace of mind about the family’s next meal, Jeannette Coronado said.

“I just appreciate their help ‘cause there’s sometimes when we are low on food and we don’t have the money to go get it. And we can come here and get the things that we run out of,” she said.

Inside Nixta Taqueria’s kitchen, Chef Rico prepares one of their signature dishes. The taqueria was named one of Food & Wine magazine’s best new restaurants of the year – a title that holds a different weight in a pandemic.

“There’s millions of people without jobs,” Rico said. “There’s people that are on shoestring budgets right now trying to deal with rent, with when’s their next paycheck. And something small like this, you know, all it really takes is a little bit of electricity on our part.“