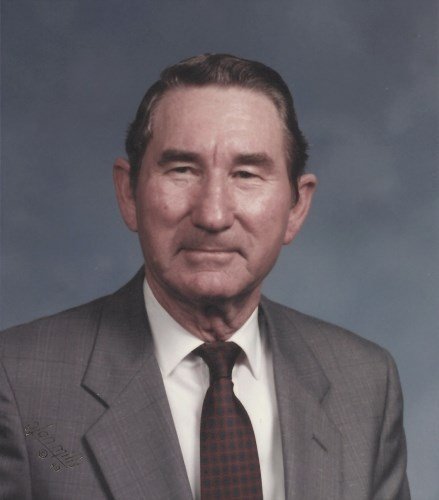 He was a devoted husband and father and took great pride in his family. James was born at the Frio Town ranch home of his parents, Lee Reavis and Notie Barr Hiler, on July 25, 1928. James’ ancestors included Joshua Lee and Nola Blackaller Hiler, descended from William Stevenson Hiler, county judge and sheriff of Frio County in the 1870’s and rancher James Harrison Blackaller.

James attended school at the one-room schoolhouse which was also the Methodist Church in Frio Town, later graduating from Pearsall High School. He graduated from the University of Texas in Austin and married Elizabeth Shelton of Pearsall in 1949. To them were born James H., Jr. (Jay), and Mark Lee. The family lived at the Hiler Ranch at Frio Town until moving to Pearsall in 1958 to start their children in school. James began his business career in Pearsall while continuing to ranch with his father and introduced farming into the family operations. He continued the family operations beyond his father’s death in 1973, later developing the ranch’s hunting operation. James, with his Hiler Hunting Lodge, was named Soil Conservation Service’s Wildlife Conservationist of the Year.

James was a longtime member of Pearsall First United Methodist Church, having served in many capacities, including Chairman of the Board, Finance Committee, and Lay Leader. He was a Sunday School teacher and later became active in Methodist Men’s Group, Gideons, Uvalde Emmaus Community, and Kairos Prison Ministry. During his business career, James served as Executive Vice President of Security State Bank, Executive Vice President of Frio National Bank, and as President of Pearsall Rotary Club. James served as an investment broker for Edward Jones and Linsco Private Ledger, and formed Hiler Real Estate, with which he was active until his retirement.

James was preceded in death by his parents, brother Reavis Nelson Hiler, sister, Belvie Lee Martin, and son, Dr. Jay Hiler. He is survived by his wife of 71 years, Elizabeth Hiler of Bryan, Texas; son, Mark Hiler and wife, Brenda, of College Station, Texas; granddaughters, Sally Hiler Cone and husband Matthew, of Houston, Texas; Susan Hiler, of Newport Beach, California. He is also survived by grandsons Lucas Hiler and wife Kerry, of Boerne; Jason File of Colorado Springs, Colorado; and Dr. Josh Hiler of Montgomery, Texas. He is survived by six great-grandsons and one great-granddaughter.

Visitation will be on Wednesday, August 19, 2020 from 5:00PM to 7:00PM in the Hurley Funeral Home, Pearsall. Private burial services will be in the Frio Town Cemetery. A memorial service will be held at 10:30AM Thursday in the Pearsall First United Methodist Church.

With the restrictions imposed by the COVID-19 pandemic, facial coverings will be required, and social distancing will be observed.