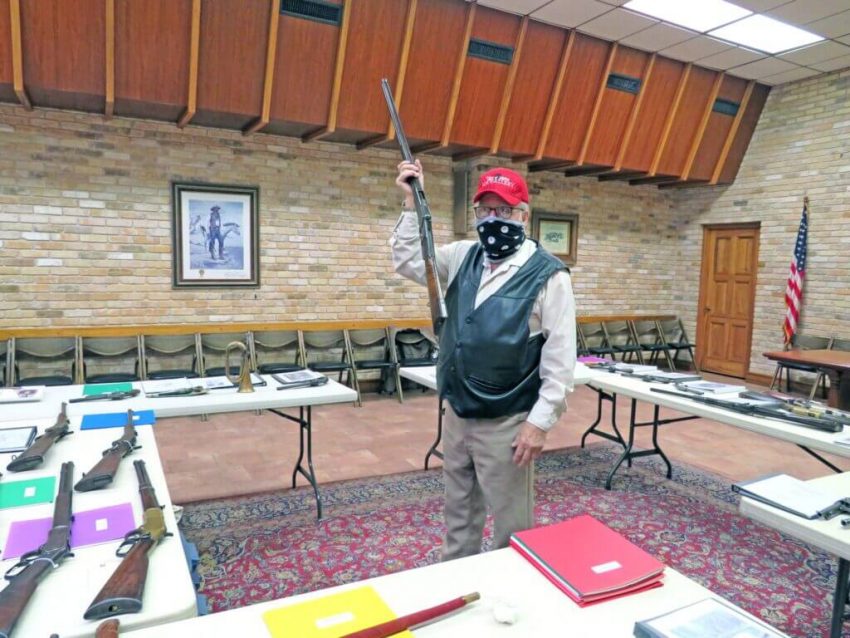 By Juyle Keeble at the Uvalde Leader-News, November 22, 2020

Wendell Grangaard has spent more than 60 years collecting and, if investors can be found to raise at least $5 million, Uvalde has a chance to host a museum housing well-preserved pieces of history related to George Armstrong Custer and native American history that Grangaard believes would draw an estimated half-million visitors a year to the area.

Grangaard, his friend and associate Dave Molina, and area developer Rick Perez were at the Nopal Street branch of First State Bank of Uvalde on Thursday morning, displaying revolvers, rifles, knives and tools belonging to Custer, Sitting Bull, and others settlers or native Americans.

The event was attended by city and county officials, local businessmen, and members of the media and chamber of commerce.

Binders of information accompanied the exhibits, and one attendee remarked, “College history classes have nothing on this.”

Grangaard, who spent years working with native Americans, said he was adopted as a sort of grandfather, and so able to gain knowledge, becoming a keeper of stories and language for the tribes.

The author of “Documenting the Weapons Used at the Little Bighorn,” he spoke about how many people don’t realize Custer’s connection to Texas, where he spent time after the Civil War serving in Hempstead and Austin.

He was written about in a 2016 edition of “Cowboys and Indians” magazine, referencing what was thought to be the lost ability to translate the pictographic language of the Cheyenne and Sioux. Grangaard, who knew the sons and grandsons of native Americans who fought in the Battle of Little Bighorn, learned the pictographic language, often carven into weapon hilts, from Oglala Nicholas Black Elk.

In the May/June 2016 edition of the magazine, a quote from Christopher Kortlander, founding director of the Custer Battlefield Museum in Montana, reads, “Through direct descendant oral history, Wendell has recorded the key that appears to unlock the unwritten code of the Plains Indians. In my 35 years in this field, I have never known of any such documented key to unlock the cryptic language of Plains Indians symbols. This is a major breakthrough.”

Now, Grangaard is offering Uvalde the opportunity to access three collections of weapons and memorabilia, stating if the museum is built here he will move here, design the concept and create interactive exhibits.

However, this is far from a done deal, with over eight other areas all competing to house the museum, including New York.

Investors are needed to clinch the deal, and Perez said the key goal would be for those in the community to help put together a down payment, which might later be supplemented with grants.

The museum, if built here, would draw tourists from all over the country to a premiere display of artifacts of the American west, and offer education so history and traditions related to the past and the founding of the country might be kept, rather than lost to the past.

Uvalde is being considered as a potential location in part because Molina owns land in Concan and became familiar with the area’s temperate climate, and the excellent accessibility provided by being at the crossroads of U.S. Highway 90 and U.S. Highway 83.

“This opportunity is ours to lose,” Perez said. “It could bring hundreds of thousands of visitors per year to the area.”

He said initial costs are being estimated between $5 to $10 million, but potential benefits are large, in the amount of visitors drawn to the area and the preservation of history.

He spoke of his time on the Uvalde City Council, saying he helped work with the University of Texas when they were asked to help maintain the Briscoe Garner Museum.