Governor told Texas counties can allow bars to reopen. Only 1 of the state’s 10 biggest counties will. 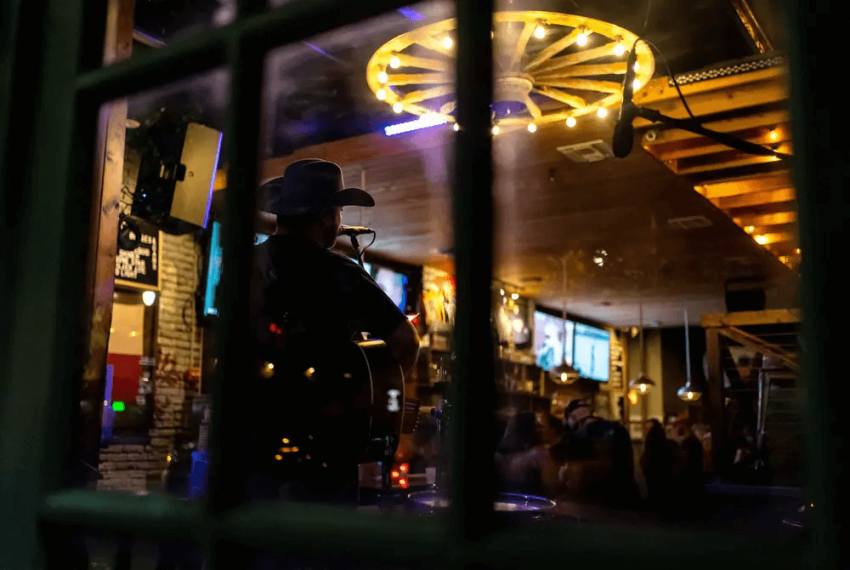 By Juan Pablo Garnham and Stacy Fernández at the Texas Tribune, October 8, 2020

The day after Gov. Greg Abbott said Texas counties could allow bars to reopen, only one of the state’s 10 most-populous counties — Denton — has decided to take him up on the offer.

Meanwhile, the state’s two largest counties are keeping bar doors closed for now, and several other counties are trying to determine whether reopening is safe at this point during the pandemic.

On Wednesday, Abbott announced that bars could reopen for in-person service at 50% capacity as early as next week, but each county government must first opt in through the Texas Alcoholic Beverage Commission. Almost immediately, Dallas and Harris counties declined.

In an interview Thursday with The Texas Tribune, Dallas County Judge Clay Jenkins said his decision was based on where the county stood on its color-coded risk-level charts, as well as what scientific advisers said.

“Their recommendation was not to open bars when we are at red or orange. We are currently in orange and our numbers are climbing, so, if that doesn’t reverse, sooner or later we’ll be back in red,” Jenkins said. “Therefore, following the doctors’ advice, I won’t be opening bars at this time.”

But Denton County announced Wednesday that bars would be opening in the North Texas county. This could happen as soon as Oct. 14, according to Abbott’s order.

“Denton County has continued to do a great job with our cases down compared to other urbanized areas in North Texas,” Denton County Judge Andy Eads said in a written statement. “We feel for the financial pain these businesses have gone through and we fully support their reopening.”

Other county leaders are taking more of a wait-and-see approach. Bexar County Judge Nelson Wolff said he would continue consulting with health authorities before deciding whether to opt in. Other major counties still evaluating what they’ll do include Collin, El Paso, Fort Bend, Hidalgo, Tarrant and Travis counties.

Bars had first been shut down in March, at the beginning of the coronavirus pandemic. Abbott had allowed bars to reopen — with capacity limits — in May, but ordered the bars to close again in June as coronavirus cases soared in Texas. He had expressed regret over reopening bars at that time.

Under the order Abbott issued this week, bars in counties that opt in can resume in-person service at 50% capacity, though all customers must be seated while eating or drinking. The governor will not impose outdoor capacity limits on bars or similar establishments.

Abbott said COVID cases and the number of new hospitalizations have “remained steady” in recent weeks. Yet they still exceed the levels when he first relaxed restrictions in May. There were at least 3,556 people in Texas hospitalized with COVID-19 as of Thursday, more than double the number of people in hospitals on May 22 when bars first reopened, according to a Texas Tribune analysis. Likewise, the statewide seven-day positivity rate — the proportion of COVID-19 tests that come back positive — remains above 6%. The World Health Organization recommends a rate below 5% before governments ease restrictions.

Positivity rate has not dropped below 6% since May

In September, Texas health officials changed the way the state calculates the positivity rate — the share of tests that yield positive results — to account for the date on which a coronavirus test was administered. The new calculation reveals that the state’s positivity rate was higher in June than originally disclosed. Since late May, the positivity rate has not dipped below 6%.

Among the undecided Texas counties, their own health indicators and how reopening bars could affect progress amid the pandemic are top concerns. Abbott said in his order that bars in regions of the state with high hospitalizations for coronavirus won’t be able to reopen. He defined those regions as areas where coronavirus patients make up more than 15% of hospital capacity.

In El Paso County, COVID-19 cases are currently on an upward trajectory. On Thursday, the city reported 523 new cases in one day bringing the total number of active cases to a record high and as of Wednesday, hospital capacity had reached 15%, but it remained below 15% for the region, which includes other neighboring counties.

“I will be making a final decision in the coming days based on the information I receive from our Local Health Authority, other respected health professionals and input from our Federal, State and Local elected officials,” County Judge Ricardo Samaniego said in a statement on Wednesday. “Rest assured that I intend to make a decision that is in the best interest of the community based upon the scientific data concerning Covid-19 in our community.”

In other counties, like Hidalgo, the situation seems to be improving.

“The day before the governor made his announcement, we received word from the state that we were no longer a high hospitalization area,” said Hidalgo County spokesperson Carlos Sanchez. “Judge Richard F. Cortez is hoping to meet with local health officials, including the health authority and the head of the health department, as well as consulting with the 22 mayors of Hidalgo County to get a sense from them of whether to proceed forward with opening the bars.”

Tarrant County Judge B. Glen Whitley said he’s still consulting with local mayors, health officials and the district attorney about what to do and will make a decision Monday at the earliest.

In the meantime, Whitley said he needs Abbott and the Texas Alcoholic Beverage Commission to be more clear about what power local authorities have to enforce safety guidelines in bars, if they can close individual bars that consistently break the rules and what flexibilities exist for local officials to pull back after a county opts-in to reopening.

“We’ve lacked clarity in a lot of the different things that have come out before and this just continues to do that,” Whitley said. “But at least the governor is giving it back to local control.”

A spokesperson for the governor’s office didn’t immediately respond to a request to comment for this article.

Tarrant County had a recent uptick in cases, and the state has reported 734 backlogged cases from the county which is 1.5% of its cumulative cases. Whitley attributed it to Labor Day gatherings and schools reopening in person. As he thinks through the decision, Whitley worries about the impact that upcoming holidays coupled with bar reopenings could have.

“We’ve just got to continue to be careful, we’re not through this yet,” Whitley said.

Judges are also worried about the fact that neighboring counties could have different rules in place. For example, Denton County’s decision to open up bars could impact neighboring Dallas County.

“People can go to the bars and down the street in the other county and then come back,” Jenkins said. “It would be best if there were at least a regional approach to not opening bars or if he [Abbott] did not open that door at all in counties over a certain size, because opening bars will hurt public health and other businesses at a time when our numbers are increasing.”

Montgomery County, which borders Harris County, will opt in, as will Williamson County, according to KVUE, which neighbors Travis County.

While Texans haven’t been able to enjoy bars since June, many have enjoyed nights at locations formerly classified as bars. The Alcoholic Beverage Commission let bars reclassify as restaurants by shifting their menus to offer food throughout their business hours, so Texans can still clink glasses — so long as they can also order food on the side.

County judges said that they are concerned for those establishments that are suffering, but that they have to look out for the rest of the community.

“I feel very badly about our bar owners and employees,” Jenkins said. “But we cannot sacrifice the good of the rest of the economy or public health to get bars open right now.”

Trump pulls out of the virtual debate with Biden, calls it a 'waste' of timeBandera Meth dealer sentenced to the pen