Gov. Greg Abbott promises to ramp up COVID-19 vaccinations across Texas during 2021 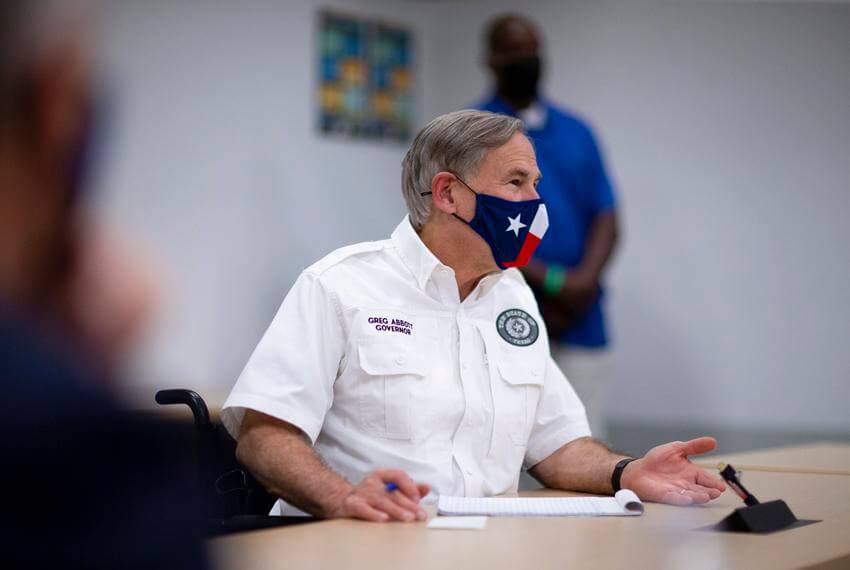 More than 877,000 Texans have received a COVID-19 vaccine since they first began arriving in Texas nearly four weeks ago, and that number is expected to increase by at least 50,000 more per day, Gov. Greg Abbott said Monday.

“Never before in the history of this state has Texas vaccinated so many people so quickly, “ Abbott said during remarks at the Esports Stadium Arlington & Expo Center, a newly-designated “vaccination hub” that local health officials said can vaccinate thousands per day. “It’s stunning to see what we’ve accomplished.”

The Arlington center, home to the city’s mass vaccination effort since December, is among 28 sites designed by the state as hubs.

“Our goal is, by the end of the week, we have no vaccines left,” said Tarrant County Judge B. Glen Whitley. The county’s health district was allotted 9,000 doses in the most recent shipment this week.

The hubs are meant to streamline vaccinations at a time when the state is seeing an unprecedented surge in COVID-19 cases, deaths, and hospitalizations. Texas continues to prioritize vaccinating health care workers, people who are 65 and older, and those with medical conditions that increase their risk of hospitalization or death if they contract the virus.

The large sites will receive most of the state’s next shipment of 158,825 COVID-19 vaccine doses this week. Just over 38,000 doses will go to 206 additional providers across the state, including several in rural counties that until recently had not received an allotment.

Officials promise bigger allotments in the weeks and months to come, but a patchwork local system of vaccine distribution, among other issues, has created a tumultuous rollout to the long-awaited vaccine.

On Monday, Abbott said Texas expects to see an additional 310,000 first doses per week for the rest of January and up to 500,000 second doses earmarked for those who have already received the injection in Texas. Continued increases are expected, Abbott said, depending on the federal government allotments.

“This structure [of hubs] that we now have created can be expanded and will be expanded very swiftly across the state,” Abbott said. “The only limitation that we now face is the limitation of supply. Supply the vaccination is not something that the state of Texas is in control of. The supply of the vaccination comes only from the federal government, and for them it comes largely from the manufacturing capabilities” of the companies making the vaccine.

Two vaccines, by Pfizer BioNTech and Moderna, have been approved for emergency use by the U.S. Food and Drug Administration and are being distributed nationally. A third company, Johnson & Johnson, could seek emergency approval of its vaccine from the FDA as early as February.

The number of doses that have been administered so far includes those given at hospitals and clinics and other providers, as well as those given through a federal program to inoculate residents of long-term care facilities and nursing homes, Abbott said.

The data on the number of doses administered has a reporting lag of at least two days, Abbott said, but added that Texans will start to see a significant uptick in those numbers as this week’s vaccinations are reported.

Texas Health Commissioner John Hellerstedt said the rate and scale of the state’s rollout has been “a really amazing operation” and said the creation of the hubs would ratchet up the rate of administration.

“Through the kind of vaccination operation we see here, we’re very confident it’s going to accelerate here even more,” Hellerstedt said. “It is really the way forward.”

Abbott and other health officials at the Arlington site on Monday urged Texas residents and providers to be patient while the state supply catches up with the demand among those eligible for the shot.

“We will be getting more vaccine, and we will be discovering better ways to administer the vaccine in a timely way to everyone who is willing to get it, but we just don’t have that supply yet,” Hellerstedt said. “I can’t say that more emphatically. If we had more, there’d be more going out.”

Abbott on Monday said he and other governors were pushing Walgreens and CVS to speed up their programs to more swiftly get vaccines to nursing home and long-term care residents. That process, he said, “is moving at a far slower pace than what the state of Texas is moving at.”

“Which means the rest either haven’t been given out or haven’t been reported yet,” Abbott said. “There is no reason for that process to be moving as slowly as it is.”

Officials from Walgreens and CVS could not be immediately reached for comment Monday.

Just over 2 million doses have been allocated to the state since mid-December, according to the Texas Department of State Health Services.

Texas has administered the first dose of the two-dose regimen to more people than any other state in the nation, according to the U.S. Centers for Disease Control and Prevention, but demand among the more than 8 million people who currently qualify still far outweigh the state’s vaccine supply.

More vaccination hubs will be announced as weekly shipments get bigger, health officials say. In announcing the plan last week, the Texas Department of State Health and Service (DSHS) said the hubs will be required to set up registration phone numbers and websites and to focus on the most vulnerable communities in their regions. Contact information for the hubs can be found here.

The effort comes as production ramps up on various COVID-19 vaccine candidates in anticipation of federal approval, including two being produced in Texas.

On Monday, Texas A&M University officials announced that a biotech production facility in College Station has begun manufacturing two different COVID-19 vaccine candidates that are moving toward federal approval for emergency use as part of the federal government’s Operation Warp Speed.

As part of a $265 million contract with the federal government, the Texas A&M University System Center for Innovation in Advanced Development and Manufacturing — which is owned and operated by FUJIFILM Diosynth Biotechnologies — was tapped last summer to mass-manufacture a vaccine being developed by Maryland-based Novavax.

The Novavax candidate began phase three testing in the U.S. and Mexico in December.

The College Station facility expanded and has added about 260 positions since April.

“Our team has worked around the clock since July and we’re starting to see light at the end of the tunnel,” said Dr. Gerry Farrell, chief operating officer at FUJIFILM Diosynth Biotechnologies. “There is great pride and satisfaction on our team for being part of the solution to the pandemic.”