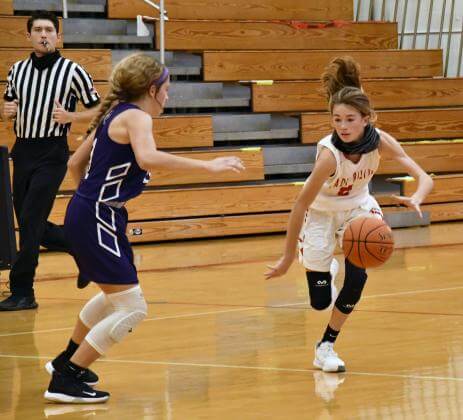 By Christine Granados at the Fredericksburg Standard Post, December 2, 2020

After placing fourth in the two-mile run at the UIL 4A State Cross Country Championship Meet last Tuesday, Taylor Grona relaxed by playing point guard on the Fredericksburg High School junior varsity basketball team and playing in her first varsity game on the same day.

“My mindset was pretty much just have fun and enjoy it while you are there, because you never know what’s going to happen the next few years,” Taylor said about her state finish in the two-mile race.

The freshman runner stuck with her game plan of keeping pace with the top-tier runners in the state.

“I was in the position I wanted to be in for most of the race. There were about five or six of us up at the front, and I just wanted to stay right there with them,” she said.

She was No. 2 at the mile marker coming off a strong headwind, according to her mother, Carrie Grona.

“I was sitting on a bench there and I just kind of put my head down,” Carrie said. “Of all things for that kid, it’s a headwind that gets her most. She only weighs 95 pounds.”

FHS Head Cross Country Coach Dan Aldrich gave her headwind strategy of trying to draft behind people, but Taylor, who is used to running up front, kept tripping over everyone’s feet, so she made the decision to leave the pack and faced the headwind full force.

Taylor made Abree Winfrey, a sophomore from Canyon work for her third-place finish of 11:45.83.

“The Canyon girl who beat her right at the end of the race for third was just a little thicker than Taylor was,” Carrie said. “You could tell it just it took a lot out of her.”

“I stayed with them for pretty much the whole race, and when we crossed the bridge, it was probably about 400 meters I would say, that’s when I knew I had to kick it in,” Taylor said. “I sprinted all the way at the end, as much as I had left.”

Yvonne Rode, who ran in the ’80s, holds the best individual finish in FHS’ history, placing third in 1985.

“Taylor Grona raced against a very competitive group of girls to medal and finish as the fourth-best 4A girl in the state,” said Aldrich. “Her fourth place finish puts her in the school record books as the second-best individual girl finisher for Fredericksburg High School at the state cross country meet.”

All in the family

Taylor comes by her competitive nature naturally. Her father, Jay Grona, played baseball for Tarleton State University on scholarship and her mother, Carrie, who ran track at Midland Greenwood High School and is a Tarleton graduate, coaches the FHS girls’ basketball team.

Although Jay didn’t run track, Carrie said he should have.

“I cannot believe he didn’t run cross country because every Wednesday in college, he’d have to run three and a half miles, and I’d have to wait for him to finish because I’d pick him up after practice,” she said. “He was always the first one finished and he never looked tired.”

Thomas ran the 100-yard dash and on the 440-yard relay at state meet. He also broke the state discus record and placed second in shot put.

Then there’s her younger sister, Rylin Grona, who is making a name for herself in cross country, as well.

She ended her seventh grade season with a first place finish at the Southwest Middle School District meet with a two-mile race time of 12:05.

“Taylor wasn’t at Rylin’s district race and that was the first question she asked when she called me, ‘What was her time?’” Carrie said. “When I said 12:05, she just sat there a minute. She said, ‘Mom, I didn’t run that as a seventh grader.’ I will be very curious to see how that develops in high school. How friendly of a competition that’s gonna be.”

While Taylor has someone at home who can push her to be her best, she also does a good job of pushing herself.

After the state race last Tuesday, she slapped compression sleeves onto her legs for the two-hour long ride home.

“I did that on my way home,” Taylor said. “That helped my legs recover really fast.”

She got to Fredericksburg in time to start in the junior varsity basketball game against Mason, and she scored 12 points.

Her mother decided she would allow her to get some playing time on the varsity squad.

Taylor made her varsity debut with a couple of key steals in the fourth quarter that sparked the team to a 53-52 victory over Mason.

“When I put her in, I thought, she’s just going to be a turnover waiting for a place to happen, because she’s gonna try to push too hard and the ball’s not going to go with her, but none of that seemed to happen,” Carrie said. “She just looked like she hadn’t missed a beat, so it was good for her. It was good for confidence, too.”

It was a perfect end to a perfect day for Taylor, whose favorite sport is basketball.

“I first started cross country in seventh grade, and I was going to do it just to get in shape for basketball,” she said. “Then I turned out to really, really like running, so that’s how I continued on.”

She likes the camaraderie of basketball and team sports. She said teammates help calm her nerves and offer a lot of support. Running solo is not something she likes doing, she said.

“When me and Claire (Cop) went to regionals, we didn’t have a team and we really missed our team,” Taylor said. “My goal is to keep pushing myself, and it will push the team. So maybe the whole team can go to state next year.”

Taylor wasn’t alone at the state meet. She had her own cheering section with her that included her mother, father, sister, both sets of grandparents, cross country teammates and best friends from school to meet her at the finish line.