For nearly 3 million disabled Texans, voting this year is even harder 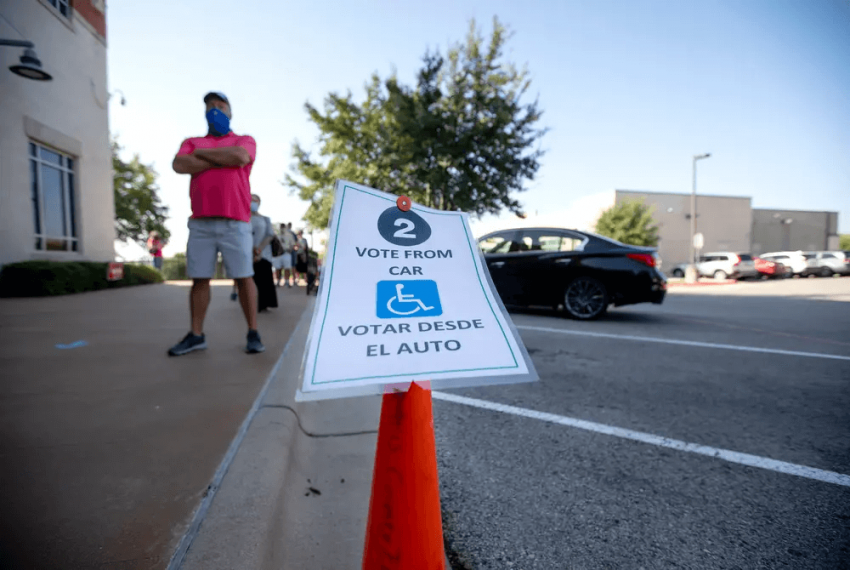 Val Vera finally cast his ballot after sitting for two hours in his van outside a Denton County polling place. He wasn’t waiting on people in line ahead of him, but for an elections clerk to respond to his phone calls.

Vera, 52, is disabled and decided to vote curbside this election, an option every county is required to offer any voter whose health would be harmed by entering the polls, or who is physically incapable of doing so.

“In an ideal world, curbside voting at your polling site, there’s the designated parking spot,” said Molly Broadway, voting rights specialist at Disability Rights Texas. “There’s a sign that lets you know that this is where curbside voting is going to happen, and there’s a call button, essentially, that one can access, which will alert the poll worker inside the building of your presence.”

For millions of disabled Texas voters, casting a ballot has long been challenging enough, even without a pandemic and explosive turnout in a high-octane election cycle. Using curbside voting, mail-in ballots and other aids, they must navigate a system that in some parts of Texas has been slow to accommodate their needs.

With fears of contracting COVID-19 compelling more voters to explore options to avoid setting foot in a polling place, disability rights advocates say the process has become an exercise in persistence for even more disabled voters.

In 2012, 30% of disabled voters nationwide reported difficulties at polling places, according to a Rutgers University study. In Texas, a newer Rutgers study estimates, about 15% of those eligible to vote in the general election are disabled — almost 3 million people.

Lisa Schur and Douglas Kruse, professors who helped conduct the study, said lack of accessibility causes disabled people to vote at lower rates than the general population. Without barriers, they estimate, 3 million more disabled Americans would have voted in 2012. Though it’s hard to determine the extent without solid data, the pandemic could limit people’s access even further.

Vera’s voting experience tells the tale. There were no signs directing him where to go to vote curbside when he pulled up at his polling place, but Vera knew what to do because of his work in disability activism. He called the county elections office three times to ask that his ballot be brought out to him — as the law requires — waiting 30 minutes in between each call. Each time, he was assured someone would be out soon.

It took three calls and two hours, but he did vote.

State law doesn’t require signs to direct curbside voters, and Broadway and others said not all counties across Texas have them. In some counties, they said, they’ve seen the signs posted inside instead of outside.

“The whole point of curbside is, if you’re likely to hurt yourself by entering the polling location, you’re allowed to curbside vote,” said Josh Levin, election protection and outreach fellow at the Texas Civil Rights Project. “So [if] to get that number you have to go inside the polling location, [it] really defeat[s] the whole purpose of the program.”

Although curbside voting is meant to be an accommodation to help voters, it isn’t perfect.

“I did hear during this election cycle that someone was basically turned away because the poll worker at that location who was trained to use curbside voting for the designated person to bring the machine out had called in sick … and so that’s not OK,” Broadway said. “All the poll workers should be trained on how to utilize the accessible voting machine, which is usually the machine they use for curbside voting.”

Broadway said she’s also heard of voters being questioned about their disability status while trying to vote curbside, something election authorities aren’t allowed to do.

“Eligibility for curbside voting is subject only to the voter’s self certification that they cannot enter the polling place without assistance or risking injury to their health,” Ryan Cox, a senior attorney in the voting rights program at the Texas Civil Rights Project, said in a text message.

Disability Rights Texas tries to help voters navigate hurdles they run into at the polls. This year, Broadway said, increased voter turnout, coupled with increasing visibility for disability rights over the past few years, has spawned more calls than usual, and not just for curbside voting.

Chase Bearden, deputy executive director of the Coalition of Texans with Disabilities, said his organization heard reports of long lines at one polling place that strayed into grassy patches difficult to navigate in a wheelchair. Matt Plummer, a wheelchair user, said when he went to vote in Tarrant County, his wife had to make selections for him because he couldn’t reach the touch screen at the back of the machine.

Disabled voters in Texas are also allowed to use mail-in ballots, which helps some voters, but those aren’t entirely accessible either.

Kenneth Semien Sr. said he considered voting by mail but decided to go in person. To submit a mail-in ballot, Semien would have to rely on someone else to mark it for him because he is blind. Not only would that strip away his independence, he said, but he also would have no assurance the person was actually marking his choices instead of their own. Semien is involved in an ongoing federal lawsuit against the Texas secretary of state that is seeking more accessible mail-in ballots, and he thought an alternative way to vote would be available by the time November rolled around.

Instead, Semien cast his ballot in person at the same polling location he’s used in Jefferson County for the past 15 years. Once he arrived, a security guard he knew helped guide him through the line, telling him where to walk so he could stop on the taped X’s on the floor.

As he stepped up to vote, he said, the poll worker took a long time finding where to plug his headphones in so his screen reader could read the ballot to him. Such technical issues sometimes leave people unable to vote, and this one almost made Semien miss his bus back home.

Each time before he goes to vote, Semien calls ahead to make sure the polling location will have someone on staff trained to use the accessible voting machine. Typically, he said, he’s told what he wants to hear, but problems crop up when he arrives.

“It is just terrible that you have to keep repeating these things, but every time we go to the polls we deal with some of the same issues, you know, if the equipment is not available for some reason, they hadn’t gotten set up yet, even though I called before,” Semien said.

Ahead of Tuesday, Bearden said, he and his organization expect more calls about disabled voters encountering obstacles, but he hopes Texas will take note ahead of the 87th legislative session and enact change.

“I’m hoping afterwards that the state will aggressively look at some of these things, and actually have some good discussions about how we can improve accessibility and make it easier to vote because we haven’t done a really good job of that,” Bearden said. “All Texans deserve the right to cast an independent, private ballot with security in mind.”

From behind the scenes to the front lines, Uvalde respiratory team saving livesMore than 9 million Texans have cast ballots so far, surpassing the state's total votes cast in 2016