Erase Strokes From Your Golf Game — No Pencil Required 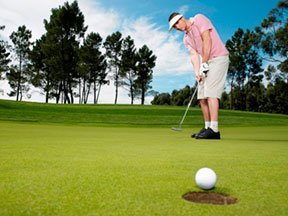 (NewsUSA) – “To shave strokes from your golf game, the only equipment you need is a good eraser.”

Although this phrase is uttered jokingly by many golfers, recreational golfers who’ve reached their plateau have had very few other options, until now.

“If recreational golfers insist on following the rules used by the PGA Tour, there’s little they can do to immediately improve their game,” says John Hoeflich, executive director, of the United States Recreational Golf Association (USRGA). “However, if they play by USRGA rules, they do have the option to switch to better equipment.”

The USRGA is the official organization that governs recreational golf. Its rules allow the use of higher-performance golf equipment. Hoeflich estimates that more than half of U.S. golfers agree with the USRGA rules that permit equipment that “puts fun back in the game, speeds up play and helps achieve better scores.”

Callaway Golf started the recreational equipment movement in 2000 with the ERC II driver. Now Polara Golf is advancing the movement with its Advantage driver and Ultimate Straight golf balls — both engineered to eclipse the PGA limits, which means you can’t play them in the Masters or U.S. Open.

David Felker, chief technology officer for Polara Golf, explains, “Our drivers and balls are not intended for the top amateur players and professionals. We purposely designed equipment that exceeds the performance limits accepted by the PGA Tour, so that recreational golfers can experience less frustration, score lower and have more fun.”

A 2012 Google consumer survey revealed that 63 percent of respondents would consider using golf equipment that provides a performance advantage. This sentiment is shared by the PGA of America president, Ted Bishop, who says, “I think anything we can do to relax the rules, if it means putting non-conforming equipment in the hands of players that enable them to hit the ball higher and farther and enjoy the game more — what’s the problem?”

According to the National Golf Foundation, golf rounds have fallen by 8 percent since 2007, largely due to the frustrations of the game, excessive play times and high costs.

“The technology now exists to make golf more pleasurable for everyone,” says Felker. “Who doesn’t want to have more fun?”

The Real Story Behind Sports Icon RudyFor Love of the Game — Smokeless Tobacco Still a Part of Baseball
Comments: 2