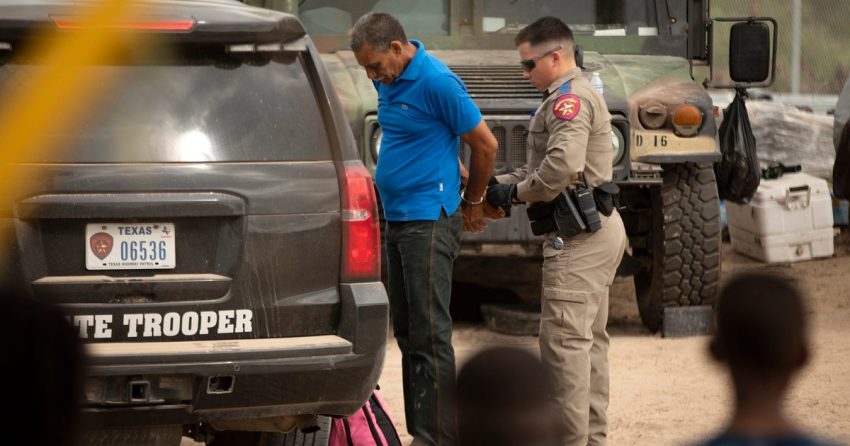 More than two dozen Democratic members of Congress called on the U.S. Department of Homeland Security and the U.S. attorney general to investigate legal problems that have arisen out of Texas Gov. Greg Abbott’s border security initiative to arrest and jail migrants on state criminal charges.

The letter, penned by 26 Democrats from Texas and across the country Friday, asks the federal government to investigate whether Abbott’s “catch and jail” immigration policy violates the U.S. Constitution, citing the violations of state law and logistical problems that have arisen from more than 1,600 trespassing arrests, as reported by The Texas Tribune.

In response to increasing illegal border crossings, Abbott since July has directed Texas state police to arrest migrants on state criminal charges. Almost all of the arrests have been for alleged trespassing on private property in Val Verde and Kinney counties.

Since the arrests began, local judicial systems have been overwhelmed, consistently holding hundreds of men without filing charges and at times going weeks without appointing them lawyers, in violation of state law.

“These operations have continued to militarize Texas’ border communities and interfered with the federal immigration system, likely violating the Supremacy Clause of the Constitution,” the members wrote. “Even more egregiously, these programs have directly led to a violation of state laws and constitutional due process rights.”

The letter cites Tribune reports of missteps throughout the operation, including police wrongfully separating asylum-seeking families to make trespassing arrests, delays by prosecutors that led to illegal detention, and migrants said to have unknowingly signed away their rights to a lawyer.

“Until President Biden and his Administration do their job to enforce the laws of our nation and protect Americans, the State of Texas will continue stepping up to secure our border and protect our communities,” said Renae Eze, a spokesperson for Abbott.

Neither DHS nor the U.S. Department of Justice immediately responded to requests for comment.

As of Thursday, more than 900 migrants were detained in state prisons retooled as state-run jails for those accused of immigration-related crimes.

So far, many of the trespassing charges have been dismissed, or the migrants have posted bond to be released from state custody. Migrants whose cases have been dismissed, often because of asylum claims or prosecutorial errors, are taken back to the border for processing by U.S. Customs and Border Protection officials, local and state officials report. Migrants who have bonded out or pleaded guilty to a sentence of time they have already been in prison are almost always released to U.S. Immigration and Customs Enforcement officials.

Once the men are in ICE or CBP custody, they are either held in immigration detention, released on asylum bonds pending future immigration hearings or deported to Mexico or their country of origin, multiple attorneys said.

Defense attorneys have said in recent court hearings that their clients who have bonded out of the state prison into immigration detention are often impossible to locate. The federal lawmakers asked for DHS to better provide telephone access to the men so they can contact their families and attorneys.

In their letter, the Democrats ask federal officials to “ensure that no state is overstepping its authority with respect to the federal immigration system and that migrants are treated with the respect and humane dignity they deserve.”

The letter was signed by Texas Democrats Joaquin Castro of San Antonio, Veronica Escobar of El Paso, Filemon Vela of Brownsville, Sylvia Garcia of Houston, Colin Allred of Dallas and Lloyd Doggett of Austin. It was also signed by U.S. Rep. Alexandria Ocasio-Cortez, D-New York, and 19 other Democrats.

Wondering who can get a COVID-19 vaccine booster shot and when? Here’s what Texans need to know.Texas lawmaker keeping mum on inquiry into what books students can access as school districts grapple with how to respond