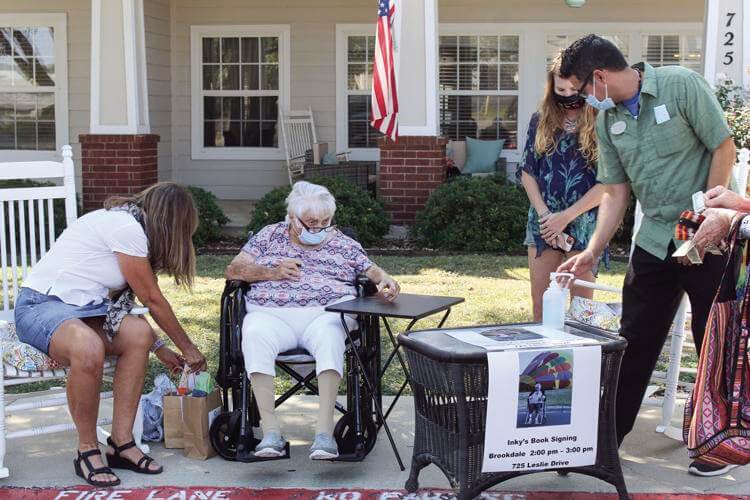 By Bonnie Arnold at the Hill Country Community Journal, October 16, 2020

When a local senior citizen wished for a hot air balloon ride for her 99th birthday and got her celebratory ride in late August, it was one more indication of the spirit of the Kerrville resident at “little Brookdale.”

Also, “The Door Closed and Windows Opened: a Memoir” and subtitled “My Journey Fleeing Nazi Germany and Building a New Life in America” was published by Ingrid “Inky” Fuerst Blumenthal (author), with Mari Glamser-Samuels, a Peterson Hospice volunteer and friend.

Inky celebrated that personal milestone at a drive-through book signing outside Brookdale Oct. 6, selling out every copy of her book in that hour (save one for her) that they had ordered for the occasion.

With the help of the Brookdale staff, Blumenthal personally signed every book, over several days before the official “signing.”

When her fans came to greet her and buy copies of the book, her signing table was decorated with a poster featuring a large color photo of Blumenthal sitting on the flying field in front of the multi-colored hot air balloon, partially inflated.

Her biography is available from Amazon as a Kindle edition and as a paperback book of 152 pages, including family pictures ranging from her childhood in Baden Baden, Germany, to her recent years as a Hill Country resident.

Blumenthal is giving a portion of the proceeds from the book sales to the U.S. Holocaust Memorial Museum.

She published it independently on Sept. 4, 2020; and Amazon categorizes it under in “History of Holocaust;”  “Holocaust History (Books)” and “Historical Biographies (Books).”

Blumenthal’s book was edited by her daughter Vivian Blumenthal Elba, and Lauren Shafer.

Blumenthal and Glamser-Samuels said this writing and editing was accomplished by frequent emails and hour-long phone calls.

A photo supplement of Inky’s journey, along with updates and a live video of the hot air balloon ride, also were posted on a Facebook page with the same title as the book.

“The balloon ride was calm and soothing and awesome. I wasn’t afraid at all,” she said.

“It’s my story and I’m not going to forget it. And I made audio tapes for about one hour a day for three months. My daughter Vivian filled in the gaps and helped go through the pictures.”

Baden-Baden was a resort town in the Black Forest, near Germany’s border with France, renowned worldwide for its numerous hot springs, and for its casino opened during the Nazi regime.

The Fuersts were a prosperous Jewish family living in a 13-room, three-story home with two maids’ rooms and a guest room part of the third floor; and gardens for both flowers and fruit. Her father was a businessman with interests in an office furniture company and a family cigarette factory.

Her family spent many hours in the Black Forest, often on picnics, she wrote; and she went skiing for the first time at age 6 on a trip with her mother to St. Moritz, Switzerland. She wrote that an artist painted her portrait while they were there; and that portrait now hangs in her daughter’s home.

Blumenthal wrote that on a later trip when she was 10, she “happily got lost for hours by herself.” When her mother greeted her return with worry, she told her mother she would have found a policeman if she needed help, and wrote, “even at a young age, I had both a sense of adventure and a practical brain.”

Blumenthal writes about the beginning of the Nazi era 1931-33, from the perspective of an 11-year-old, including being unhappy about not being allowed to march with other young people in torch-light parades to support Adolf Hitler.

In March-April 1933, she wrote, the Dachau concentration camp was established; and Nazis declared a boycott of Jewish businesses in Germany.

And one night everything changed for the family.

Her father had gone on a business trip. Nazis came to their home to look for him. Anna, their maid and cook, snuck out of the house to intercept him and warn him not to come inside.

After searching their home for her parent’s valuables, she wrote, the Nazis took her parents’ passports and demanded her mother send her father to the police office when he came home. When they were gone, her father snuck into the house to learn what had happened.

Blumenthal said her parents made the decision to leave Germany that night, with some of their valuables and the rest packed for shipment later.

The first goal was that her parents would cross the border into France; while Inge was sent with her maternal grandmother to Mannheim, Germany, to wait for instructions from her parents to join them in France.

A married cousin and his wife also were traveling to France after Nazis closed his medical practice in Mannheim, she wrote.

“No sense for them to stay. Many, many people were figuring out their next steps at this early time. And many didn’t have viable options.”

She said her parents still had their “border cards,” which had allowed residents near the French border to cross for business or pleasure. They approached the Rhine Bridge at Kehl early in the morning, but waited until it was later to drive across with less attention from border guards. They went to Strasbourg, France.

The Nazis returned to their Baden-Baden home the next day, where the maid told them Mrs. Fuerst had followed her husband north towards Mannheim.

“The Nazis then confiscated all the belongings in our house – art, beautiful furnishings, jewelry and memories. This was a common practice …” she wrote, but left Anna in the house. The family was reunited with most of their possessions later in Strasbourg, she said.

One day, her brother, by then a law student in Frankfurt, came for her and took her on his motorcycle to stay with him until they got word from their parents. And later Werner’s French girlfriend took Inge by train to Strasbourg to join her parents.

This began the family’s frequent and often frugal moves around France, before Inge and her parents moved to Italy when Mussolini was in power.

Inge’s father was challenged to find a job or start a business while not a citizen of the countries they lived in, but her mother’s relatives helped them financially, too. She attended a school where students were obliged to wear a military-type uniform, “but that appealed to youth,” she said.

Inge wrote that her parents decided to divorce in 1937, and Inge and her mother stayed in Abbazia, Italy, while her father moved to Milan, Italy. This was the year Buchenwald concentration camp opened.

She and her mother made the decision to emigrate to America in 1938, she wrote, with her mother’s passport having an expiration date of May 21 that year, and Inge still listed as a minor on that passport. Arrangements got complicated when Hitler was coming to visit Mussolini, she wrote; and Nazi and Italian security measures got harsh and strict.

Inge and her mother traveled via Venice and into France to Deauville to board the SS President Roosevelt, a medium-size ocean liner. The journey to New York City to relatives took 10 days; and they arrived to see the famous view of the Statue of Liberty on the day her mother’s passport expired.

She wrote about her father emigrating from Italy to New York and being set up by wealthy relatives on a small chicken farm in the Catskills. She also wrote that her brother Werner was a member of the French Foreign Legion, and survived the war to move to New York, too. She included a photo of him in uniform.

Inge and her parents were living safely in America by October 1938 when all German-Jews’ passports were declared invalid regardless of expiration date. That November “Kristallnacht,” the “Night of the Broken Glass” occurred across Germany; 30,000 Jewish men and boys were arrested and sent to concentration camps; and synagogues and Jewish-owned businesses were smashed or burned across Germany.

Inge attended high school in Manhattan, her 10th school in four countries, graduating in 1940; and took a separate refugee class to learn English. Even now her speech has an echo of German accent.

Blumenthal’s book continues through her young adult and adult years, a husband and other partners, a daughter and son-in-law, two grandsons, life lessons, and accomplishments.

She was living independently in Bandera and still driving, until an accident in her home sent her to Kerrville for medical treatment. Since then, for recuperation and safety, she’s been living at Brookdale on Leslie Drive, under rules directed by Albert J. Vasquez, resident programs director and other friends on the staff. As with so many under COVID changes, her world is smaller and defined by health precautions.

She says she misses her trailer, her car and spending more time outside.