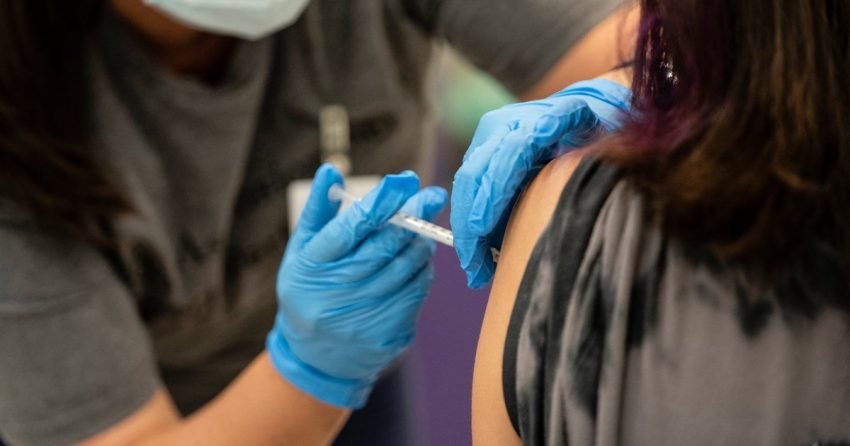 Texas kids ages 5-11 will start getting their first COVID-19 vaccine injections this week after the U.S. Centers for Disease Control and Prevention late Tuesday approved the Pfizer-BioNTech vaccine for emergency use for that age group.

The move comes after nearly two years of sickness, grief, isolation and learning loss that accompanied the pandemic for the nation’s young kids, including some 2.9 million Texas children ages 5-11.

“Together, with science leading the charge, we have taken another important step forward in our nation’s fight against the virus that causes COVID-19,” CDC director Dr. Rochelle Walensky said in a statement. “As a mom, I encourage parents with questions to talk to their pediatrician, school nurse or local pharmacist to learn more about the vaccine and the importance of getting their children vaccinated.”

The CDC director’s announcement came hours after the agency’s advisory panel recommended the shot for the nation’s nearly 30 million children ages 5-12, clearing the final regulatory hurdle before the doses could be given to young kids.

Earlier Tuesday, the CDC’s Advisory Committee on Immunization Practices voted unanimously to recommend it for the entire age group, without placing any limitations on who in that age group would qualify.

The CDC’s was the final approval needed before younger children could be vaccinated. They are charged with deciding who within that age group will qualify for the Pfizer vaccine and how it will be distributed.

“I am very supportive of this recommendation in its fullest extent, as a ‘should,’ not a ‘may,’ for all children in this age group,” said committee member Dr. Sarah Long, professor of pediatrics at Drexel University College of Medicine. “We should be very confident to employ it to the maximum, to do what it is meant to do, without significant concerns about serious adverse events. I could not be more supportive.”

The approval marks a long-awaited milestone in the nearly two-year fight against the deadly virus that experts say has likely already infected nearly half the population in that age group.

“We all have a responsibility to make this vaccine available to children and their parents,” said committee member Dr. Beth Bell, public health professor at the University of Washington. “If I had a grandchild, I would certainly get that grandchild vaccinated as soon as possible, and I think there are many people who share that perspective. Will we gain additional knowledge as time goes on? Yes, of course we will, and that is a very, very positive thing. But we do have a pretty robust view of the situation at the moment, and I think this is a huge step forward for children and parents.”

The federal government has given Texas an initial allocation of more than a million doses destined for children ages 5-11 to providers in nearly half the state’s counties. Those started landing in Texas pharmacies, pediatrics offices, health clinics and hospitals a few days after last week’s FDA decision.

Some Texas providers have already gotten the supplies needed to administer the doses and were expecting the vials to arrive late Tuesday or early Wednesday. Others, like Dr. Seth Kaplan’s pediatric clinic in Frisco, north of Dallas, have dozens of families on waiting lists, ready to bring their children in for their vaccine as soon as it lands in his office.

Kaplan, the immediate past president of the Texas Pediatric Society, called the CDC panel’s decision to back the vaccine for the younger age group “a momentous step toward protecting our children, their families and the community around them.”

“The vaccine will make it possible for children to more safely partake in upcoming holiday gatherings and in all of the normal childhood activities they have missed during the pandemic,” Kaplan said. “Pediatricians are ready to discuss the vaccine with families and to administer it to children as soon as it reaches their offices.”

After the first federal shipment, others will continue on a weekly basis. The amounts will vary based on providers’ requests, officials said.

Shots can start going into arms as soon as the CDC releases its guidelines. That means first rounds could happen as soon as Wednesday, although some providers may wait to see if the Texas Department of State Health Services will offer any additional advice.

As with other age groups authorized to receive the vaccine, the shots will be free and require two doses to be fully effective.

The Pfizer vaccine was given emergency use authorization in May for children ages 12 to 15, and was fully authorized for use in people ages 16 and up in August.

Last Friday, the U.S. Food and Drug Administration authorized the emergency use of the vaccine after agency experts found that the vaccine is safe and effective for children in that age group.

The Pfizer test results shared with the FDA show that its vaccine prevents symptoms in most children and causes no side effects more serious than those already seen in older age groups.

FDA experts decided that the benefits of the vaccine for children ages 5-11 — many of whom have suffered isolation, depression and learning loss throughout the course of the pandemic — outweigh the risks associated with the Pfizer shot.

“Vaccinating younger children against COVID-19 will bring us closer to returning to a sense of normalcy,” said Dr. Janet Woodcock, acting FDA commissioner.

Data from the CDC presented during the FDA panel meeting suggested that as many as 40% of the nation’s 28 million children ages 5-11 had already caught the virus and that about one-third of those hospitalized from it had no prior medical history that would have flagged them as high risk.

Only the Pfizer-BioNTech vaccine has been recommended for use in minors, including the 5-11 age group. The Moderna and Johnson & Johnson vaccines are still authorized for use only in adults.

Side effects: “mild to moderate”

This version of the Pfizer vaccine contains one-third of the dosage given to people ages 12 and up. But Pfizer officials say it still offers the same level of antibody response triggered in 18- to 24-year-olds. The Pfizer trial involved some 4,600 children over three phases, with about 3,100 receiving the vaccine instead of a placebo.

Pfizer has said in federal briefing documents that its vaccine is 91% effective in preventing symptomatic transmission in kids. The test group showed no new side effects — nothing worse than had been seen in older groups — and no incidents of myocarditis, a rare heart inflammation that has occurred in some male adolescents and young adults after taking one of the mRNA vaccines.

There have been no confirmed deaths from vaccine-induced myocarditis, FDA experts said last week.

Any side effects were described by Pfizer as “mild to moderate” and typical of those experienced by children after receiving common childhood vaccines. If symptoms appeared, they arose in the first two days and went away quickly, the trials showed. Most common among them was pain around the injection area, while other reactions sometimes included fatigue, headache, muscle pain and chills.

Providers will be strictly prohibited from administering diluted adult-sized doses to children. Providers who violate these instructions could have their COVID-19 vaccine provider authorization pulled.

The kid doses are being packaged with smaller needles and orange packaging to differentiate them from purple-topped adult doses.

Moderna and Johnson & Johnson are conducting their trials for the same age group but have not yet released their test data. Pfizer is already doing trials for two younger age groups: 6 months to 2 years, and 2-5 years. The pharmaceutical company’s data on the older segment is expected early next year.

No school mandates in Texas

The FDA ruling did not address whether the vaccine should be mandated for school attendance or other activities, and the CDC’s decision next week will not address that either. Leaders of both of those agencies have said it is not their responsibility to make those decisions.

In Texas, there is no indication that Republican lawmakers and state leaders, who have adamantly opposed all COVID-19 vaccine mandates, will require children to receive the COVID-19 vaccine to attend school in the state.

Since the vaccine was approved for children 12-15 earlier this year, there have been no moves to require it at middle or high schools.

Texas already requires some vaccines — such as hepatitis C, polio and measles — for children attending school but has many exceptions for parents who wish to opt out.

Federal health experts said this week that children ages 5-11 are “at least as likely” as adults to catch the virus, contradicting some early theories that they were less susceptible to transmission.

Nationally, 8,300 children ages 5-11 have been hospitalized with COVID-19 to date, Dr. Fiona Havers, a viral disease specialist at the CDC, told FDA panelists.

Native American, Hispanic and Black children were three times more likely than white children to be hospitalized, she said.

While the Texas Department of State Health Services maintains unreliable information on age breakdowns of positive COVID-19 cases, schools have regularly reported infections on campuses and can offer an idea of the spread among minors.

Three months into this school year, the number of total COVID-19 cases reported among students surpassed the total from the entire 2020-21 school year. As of Oct. 17, Texas schools had reported around 200,000 total student cases, or roughly 4% of students, since the beginning of this semester.

Some 272 school districts nationwide have had unplanned closures this school year due to COVID-19, with more than 2,000 schools and 1 million students affected, Havers said. That includes at least 45 small districts in Texas that shut down in the first few weeks of this school year.

After reaching their highest hospitalization numbers of the entire pandemic earlier this summer, Texas hospitals have reported that the number of kids showing up with COVID-19 is starting to decrease.

According to the Pfizer brief filed with the FDA, there was a 419% increase in COVID-19 cases among children younger than 18 in the United States in August and September compared to June and July. COVID-19 was among the top 10 leading causes of death for children 5-14 years of age nationwide between January and May, according to the CDC, although the mortality rate from COVID-19 for that age group remains small.

Among children 5-11 years old nationally, there have been nearly 2 million confirmed and reported cases of COVID-19 and at least 94 deaths.