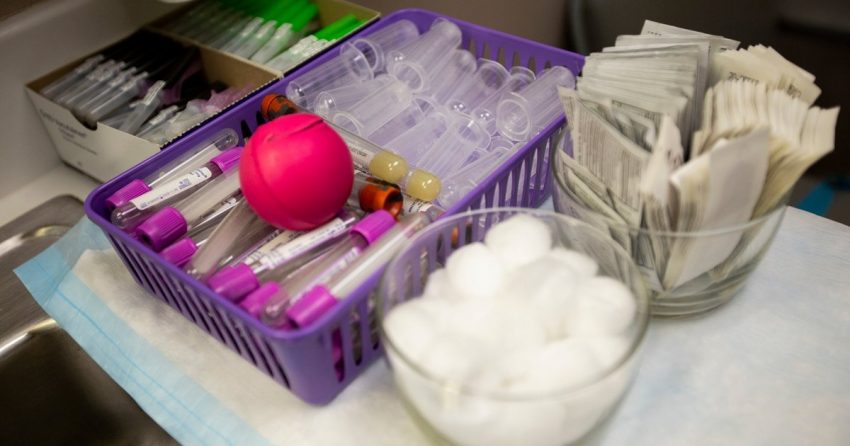 The number of abortions performed in Texas plummeted by half in September, which is the month the state’s new abortion law restricting the procedure went into effect, according to a new study from the University of Texas at Austin.

The study compared the number of abortions performed in recent months compared to the same months last year and concluded this was the largest drop in decades in the number of procedures provided. Additionally, appointment wait times at out-of-state clinics increased after the law went into effect, according to the study.

At the same time, abortion rights advocates expected the number of procedures to drop even more than it did. They’ve for months predicted that Texas’ new law, which outlaws abortions at about six weeks when fetal cardiac activity is detected, would cut down the procedure by 85%.

“It is less than expected, but we can’t say for sure why,” said Jackie Dilworth, spokesperson for abortion provider Whole Woman’s Health. “We assume it’s because women are seeking abortion care earlier than they did in the past.”

People were also more willing to forgo obligations like jobs and school to receive services, and more attention around the law’s implementation has made Texans more vigilant about tracking their pregnancies, said Kari White, one of the study’s authors.

“If there is not any legal relief from the court that would enjoin SB 8, then I think we might expect even fewer people to be able to get abortions in Texas,” White said.

Multiple factors have contributed to the overall decrease, including patients being denied care for being too far along in their pregnancies based on the new law.

“Additionally, people who were aware of (the law) may have expected that they would not be able to obtain an abortion in Texas after September 1, 2021, and therefore did not try to obtain in-state care at all,” according to the study.

Abortion providers said they’re seeing firsthand the impacts of the law that are cited in the reports.

At a Planned Parenthood health center in Houston, 150 patients seeking abortion in September were unable to access services because of the law. Just 12 days later, the number jumped to 211 patients, said Dr. Samuel Dickman, an abortion provider at Planned Parenthood of South Texas.

Neighboring states including Arkansas, Louisiana, New Mexico and Oklahoma have a combined total of 15 clinics — less than the total number of abortion facilities in Texas — and normally provide a third of abortions per year that Texas would.

Wait times over two weeks were common at many out-of-state locations, according to the study. This delay could push pregnant Texans past medical deadlines for medication abortions or even push them into the second trimester of pregnancy, when procedures have a “somewhat higher risk of complications compared to those obtained earlier in pregnancy,” according to the study.

Previous attempts from lawmakers to restrict abortions had less significant impacts. A law from 2013 that closed almost half of Texas’ abortion facilities because of strict requirements for facilities decreased 13% of the number of provided procedures. When Gov. Greg Abbott prohibited by executive order most abortions at the start of the pandemic — to preserve medical resources for COVID–19 patients — the number of procedures dropped by 38%.

“The impact of the last two months cannot be overstated,” said Amy Hagstrom Miller, head of Whole Woman’s Health. “Staff and doctors have been forced to deny hundreds of patients the abortion care they need. Texans have been forced to remain pregnant against their will or to leave the state and seek care that Whole Woman’s Health should be able to provide right here at home.”

Passed as Senate Bill 8, the Texas law blocks abortions at about six weeks into a pregnancy and relies on private citizens to sue those who violate it rather than counting on enforcement from public officials. This has allowed it to skirt judicial review so far, and the law has remained in place for two months.

The U.S. Supreme Court heard arguments on legal challenges to the Texas law on Monday from both abortion providers and the U.S. Department of Justice. Usually, courts can block the enforcement of laws considered unconstitutional, but because of its unique mechanisms, the challengers are having difficulty identifying the right defendants and fully blocking the law.

Anti-abortion groups have said the law is accomplishing exactly what they hoped for so far.

Outside the U.S. Supreme Court on Monday, anti-abortion groups gathered to chant and pray for the court to preserve the law, while reproductive rights advocates who called Texas’ law an infringement on women’s bodies protested.

“I see patients every day who are desperate and unable to get an abortion because of SB 8,” Dickman said. “Texans need relief now. Following oral arguments, we hope the Supreme Court steps in so that SB 8 can be blocked and Texans’ constitutional rights are restored.”

Disclosure: Planned Parenthood and University of Texas at Austin have been financial supporters of The Texas Tribune, a nonprofit, nonpartisan news organization that is funded in part by donations from members, foundations and corporate sponsors. Financial supporters play no role in the Tribune’s journalism. Find a complete list of them here.