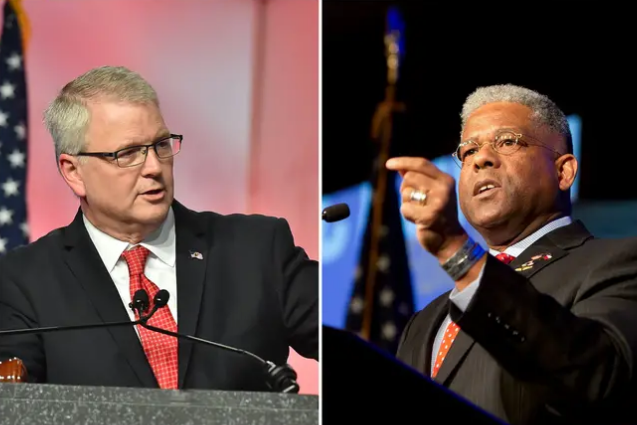 By Patrick Svitek and Cassandra Pollock at Texas Tribune, July 16, 2020

James Dickey, who is running for his second full term as party chair, faces a high-profile, well-funded challenge from Allen West, the former congressman from Florida who moved to Texas several years ago. Activist Amy Hedtke has also announced a bid for the post, which includes overseeing the party’s financial and organizational efforts.

Before thousands of party delegates vote Friday on whether to keep Dickey, candidates in the race are expected to address the crowd virtually, making their final pitches for why they think they are best suited for the job. And while delegates will cast their ballots among the 31 Senate District caucuses, Dickey said earlier this week that a request for a second vote before the entire delegation could happen after that, as it did during the 2018 party chair race.

Looming over this year’s race is the coronavirus pandemic, which upended the party’s plans to host an in-person convention in Houston and prompted party officials earlier this week to move it online after exhausting legal avenues to still proceed with the event as planned.

A more recent wrinkle emerged Thursday as the party, set to kick off its virtual convention that morning, faced hourslong delays before Dickey announced in the evening that it would adjourn until noon Friday, citing “extenuating circumstances and technical issues.” It was not immediately clear when the candidates would deliver their final pitches, though West posted a recorded speech Thursday afternoon on social media.

Later Thursday, during a meeting with the State Republican Executive Committee, Dickey apologized about the convention’s delays, even saying he took responsibility as chair.

“I am sorry that today did not go much, much better,” he told members during a livestreamed meeting. “And as the chair, that is my responsibility, and I accept that responsibility.”

While West largely stayed out of the protracted debate over the in-person convention, he has been pressing Dickey for answers in recent days about the voting technology for the online convention.

The pandemic has not been the only major event to disrupt the race. In late May, West was returning from a rally in Austin when a car cut off his motorcycle near Waco and sent him crashing. He was hospitalized with a concussion, several fractured bones and lacerations. The accident sidelined him from the campaign trail for a period of time.

Such achievements, Dickey has argued, have positioned the party strongly ahead of the November elections, which will be crucial for state Republicans as Democrats look to flip the Texas House for the first time in roughly two decades. Dickey has also used that success as a rallying point for his campaign, asking why the party would want to change horses midstream.

“The real question is: Why, 90 days before early voting starts in arguably the most important election in Texas history, why would you even consider derailing such a successful operation?”

James Dickey said in a phone interview earlier this week with The Texas Tribune.

West, meanwhile, is pitching delegates on making the party a national model for pushing back on an increasingly radical Democratic Party, both in elections and more broadly.

“It’s time that our Republican Party once again steps up and leads the way, not just in Texas, but all across the United States of America,” West said in his closing argument to delegates. “It’s time for us to make sure that the Republican Party of Texas is relevant again.

“It’s not just about raising money, it’s not just about saying how many people did we go out and get to register to vote,” West added, in a thinly veiled dig at Dickey’s benchmarks. “It’s about creating a movement.”

In addition to promising he would lead a more ambitious Texas GOP, West has capitalized on some activist frustration that Dickey has become too unwilling to stand up to state leaders. One former Dickey supporter, Friendswood activist Dale Huls, wrote last week that Dickey has turned into “a creature of the Republican establishment.”

Some critics accuse Dickey of treading too lightly on the scandal last year that forced state House Speaker Dennis Bonnen into retirement, and they say he went along with leaders’ championing of the last legislative session as a conservative success. West has outflanked Dickey on both fronts, calling for Bonnen’s resignation and signing on to a legislative agenda from conservative groups that served as a rebuke to the “purple” 2019 session.

Dickey is often deferential to the will of the party grassroots when it comes to intraparty matters, touting a “bottom-up” leadership style. As for the 2019 session, he has sought to thread a needle.

“I am not content with the results of the last legislative session,” Dickey said during a forum earlier this year. “Any session where none of all five of your legislative priorities get passed can be called a success. However, it would be just as misleading — and just as wrong strategically — to not recognize the territory we did gain.”

In any case, West’s supporters see him as a stronger messenger at a critical juncture for the party.

“The main thing we need in the Republican Party is someone who’s gonna fight for our values and not stay silent,” said state Rep. Kyle Biedermann, R-Fredericksburg, an early West supporter. Biedermann gave Dickey credit for improving the party’s organization but said “that’s not gaining us any more seats.” The missed opportunity, Biedermann added, is “mainly the messaging.”

West declined to be interviewed for this story through his campaign manager, who said he could speak after the election.

The retired Army lieutenant colonel moved to Texas in 2014 after being named CEO of the Dallas-based National Center for Policy Analysis, which shuttered three years later due to financial issues. The think tank’s board had ousted founder John Goodman earlier in 2014, and under West’s leadership, it hired a finance director who was ultimately accused of embezzling hundreds of thousands of dollars.

During a forum earlier this year, West admitted the think tank “should’ve done a more extensive background search” on the finance director. But West argued there was already a “very tough situation” when he got there in the wake of Goodman’s removal and related litigation.

“I think a lot of people know that live up in Dallas, publicly, what happened with the situation I came in behind,” West said.

In addition to his high profile, West has brought to the chair race a massive financial advantage.

That kind of money has allowed West to do things that do not often happen in a state party leadership race, like air TV ads months out from the election.

Dickey supporters question whether West has the ability to step into such a large role just months ahead of the general election, especially since he has had little involvement with the state party to begin with. Dickey, the former chair of the Travis County GOP, was first elected state party chair in 2017 by the State Republican Executive Committee after Tom Mechler stepped down from the post. Dickey won by a margin of one vote on the State Republican Executive Committee. The following year, Dickey won reelection after a contentious fight on the convention floor in San Antonio.

Summer Wise, an SREC member representing Senate District 24, said the party needs seasoned leadership like Dickey, who she said has “set records far beyond anything the party has achieved in the past.”

“[West], in the meantime, doesn’t even know the name of the Convention Center where the Convention was to take place,” Wise said in a statement. “That does not bode well for effective, clued-in leadership. We are Texans, and the ‘all hat and no cattle’ types don’t fool us.”

On top of the chair race, delegates will also decide on the party’s next vice chair. Alma Jackson, the party’s current vice chair, faces a challenge from Cat Parks, who chairs the Hamilton County party and led a 2020 candidate recruitment task force created by Dickey.

Texas Gov. Greg Abbott says "there is no shutdown coming" as coronavirus cases surgeGreat Ways to Take the Fun to the Backyard