Texas schools are being compelled to reopen classrooms on the state’s timetable, like it or not 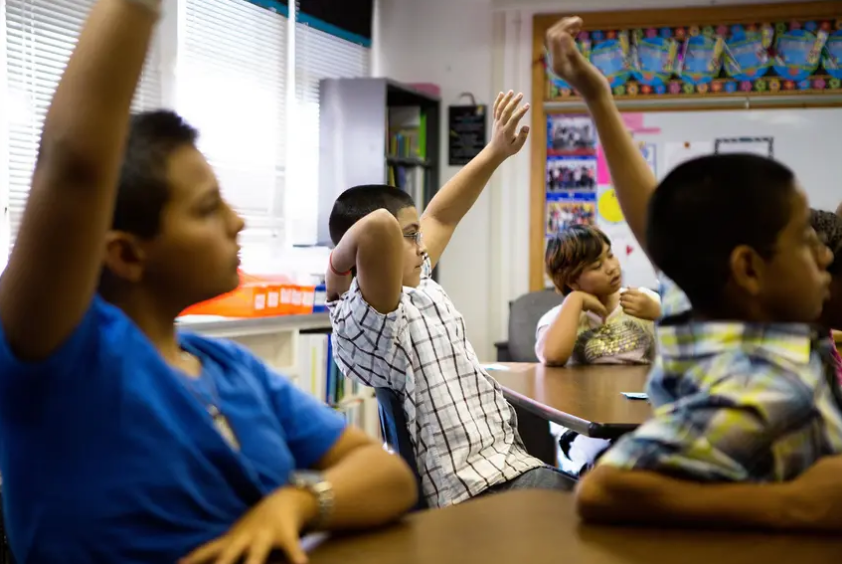 By Aliyya Swaby AND Stacy Fernández

After weeks of confusion and conflicting signals, Texas has settled into policies that effectively compel schools to reopen their classrooms this fall no later than eight weeks after the academic year begins, whether they want to or not.

Teachers, parents, school administrators and public health officials have been seeking clarity for weeks on how the state will approach reopening schools safely as coronavirus infections and deaths rise across Texas.

Gov. Greg Abbott has not responded directly to questions from reporters about who has the authority to order schools closed in areas hard hit by the virus, and the Texas Education Agency has sent mixed messages on reopening guidelines.

But despite the lack of any formal announcement from the governor, the die was cast in in a rapid two-step process Tuesday. First, Texas Attorney General Ken Paxton released nonbinding legal guidance saying local public health officials do not have the power to preemptively require all schools in their jurisdictions to remain closed, even as COVID-19 cases continue to climb in many Texas hot spots.

Then, state education officials reversed an earlier decision by announcing they will not fund school districts that keep classrooms closed for longer than the state allows even if ordered to do so by a local health mandate. Taken together, the actions put school districts in the position of reopening classrooms on the state’s timetable or losing funds and risking potential litigation.

Educators and families must once again rethink their back-to-school plans this fall. The education agency has given school districts up to eight weeks to limit the number of students permitted on their campuses, after which they must open classrooms to all students who want to attend.

That ninth week is looming large for superintendents who are not sure what the public health landscape will look like at that point. Now, they can’t depend on their local health officials to give them more time, without losing money.

“Starting in the ninth week of our respective school years, regardless of the status of the virus in our communities, as the guidance is written today, we would be faced with two options,” said Northside Superintendent Brian Woods in an interview with the San Antonio Express News editorial board Wednesday. “One would be to ignore a local health order, and in doing so likely put our students and staff and families at risk, or lose funding, which is essential to teaching and serving our families.”

At a school board meeting Tuesday night, Woods indicated he and other superintendents would consider filing a lawsuit seeking to keep their classrooms closed longer if necessary. Paxton’s decision to step into the fray weeks before the school year begins has prompted more questions than answers, including whether a deluge of lawsuits is expected to hit Texas courts demanding that health mandates be revoked or enforced.

In a statement Wednesday, Texas education officials said school districts will also be funded if they close due to a confirmed COVID-19 case on campus during the school year, as long as they provide remote instruction. “Lawful building closure orders will continue to enable a school system to be funded when providing remote-only instruction,” said Texas Education Commissioner Mike Morath. “Also, it’s important to note that the school start date remains at the discretion of local school boards.”

Across the state, some school districts are moving forward in compliancewith local health orders while others are moving their start dates earlier in line with Paxton’s guidance. Just within Tarrant County, Fort Worth ISD remains undecided about whether to allow in-person classes in mid-August, while Argyle and Eagle Mountain-Saginaw ISDs said they would reopen next month despite orders from the Tarrant County Public Health department to remain closed for in-person learning until Sept. 28.

Officials from Harris County, El Paso County, Austin and Laredo did not respond to requests for comment or answer questions Tuesday about whether they would retract their mandates.

In a Tuesday press conference, San Antonio officials said they were confused about why Paxton chose to issue guidance now. “Every time, it seems, that our attorney general appears on the scene during this pandemic, it creates confusion and chaos and it leaves a wake. And that confusion and chaos could cost lives this fall,” said San Antonio Mayor Ron Nirenberg of the health risks associated with reopening schools.

Junda Woo, medical director for San Antonio’s Metropolitan Health District, who issued the mandate to shut down schools there, said her decisions are directly tied to public safety, and orders are “not up for a popular vote.”

Already, pastors and parents at a private San Antonio religious school are suing local officials, including the Metropolitan Health District and county judge, to force open all area public and private schools, according to the Express-News. Paxton’s guidance Tuesday said local health mandates also could not shut down religious or secular private schools.

San Antonio City Attorney Andrew Segovia, in a Tuesday press conference, did not indicate whether the city would pursue legal action against private schools and religious private schools that reopen. “There’s a range of enforcement mechanisms, obviously. We don’t want to use really any of them, but we will enforce the order if we need to,” Segovia said.

Segovia said he’s reaching out to school officials and expects that they will voluntarily comply with the order, which applies “equally, uniformly to all schools.”

Paxton’s letter was “welcome news” for the Texas Private Schools Association, which has been inundated with calls from private schools looking for guidance on how they can legally reopen, said Laura Colangelo, the organization’s executive director.

But Paxton’s guidance does not definitively allow private schools under a mandate to reopen. Colangelo said the association has advised schools to ask their local health authorities for an exception and get advice from a lawyer about how to proceed.

And some public school officials see Paxton’s letter as a benefit. Boerne ISD said it would open two elementary schools in Bexar County on Aug. 12 as originally scheduled following Paxton’s guidance, according to a written statement from district officials. The move defies a local health order mandating that they remain completely online until Labor Day.

Some local health officials have already indicated they don’t see Paxton’s letter as a mandate overruling theirs and will keep their own in place. In a Tuesday press conference, Bexar County Judge Nelson Wolff said Boerne ISD and others should still comply with the local health order. Dallas County Judge Clay Jenkins, whose county has also mandated that schools close through Sept. 7, said local officials will make decisions with student safety in mind “regardless of what opinion General Paxton comes up with.”

The resulting confusion is yet another entry in the saga of state leaders’ consistent clashes with local officials over how to corral a fast-spreading virus. Abbott has repeatedly reversed his decisions, at times deferring to local officials to implement strict standards and at others criticizing them for failing to follow his lead.

Just after noon Tuesday, soon after Paxton’s letter was released, Abbott talked to reporters in Corpus Christi, where a tropical storm had flooded homes of families already fearing the pandemic’s impact. He chastised local officials for not taking the opportunity to enforce his statewide mandate on wearing masks, indicating their inaction was responsible for the continued spread of COVID-19.

When asked about making school reopenings safer, Abbott said local officials already have the flexibility and guidance they need to keep staff and students healthy. “The TEA has provided flexibility to school districts across the state of Texas and has empowered local school districts to make the decisions that are best in that particular region knowing that the spread of COVID-19 is going to be different in different regions,” he said.

Meanwhile, school superintendents are looking for ways to circumvent what they see as restrictive state rules, with politics getting the better of safety in determining when schools must reopen. San Antonio ISD Superintendent Pedro Martinez told the Express-News editorial board Wednesday that he would consider advising families to keep their children home if forced to fully reopen classrooms at the end of eight weeks.

“I don’t want to get ahead of my [school board] but we would take the necessary actions because again, I am not going to put parents or staff at risk that I know as a professional is not right,” he said.

Trump rallies oil and gas workers in the Permian Basin against Democrats ahead of the November electionAnalysis: President Trump's attempt to rock the vote sends a shudder through the political world