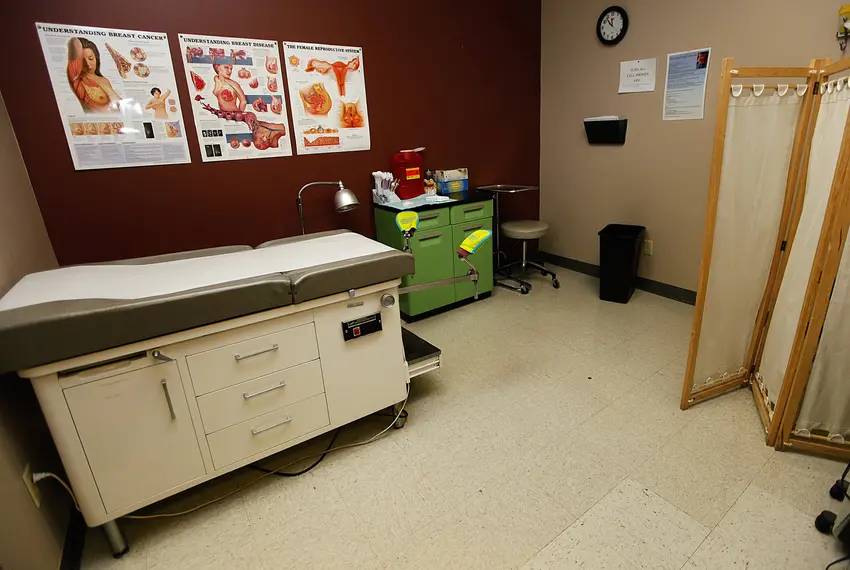 By Shannon Najmabadi and Edgar Walters at Texas Tribune, August 29, 2020

Texas is proposing to cut nearly $3.8 million in funding from programs that offer low-income residents access to contraceptives and breast and cervical cancer screenings, while leaving intact a robustly funded program that discourages women from having abortions.

Texas health officials proposed the cuts while taking great pains to avoid belt-tightening in most other programs that offer direct services in health care. As the coronavirus pandemic ravages parts of the economy, leaving the state with a projected $4.6 billion deficit, Gov. Greg Abbott asked state agencies to cut their spending by 5% — but largely exempted programs deemed crucial to public health.

While the cuts are not finalized, an August budget document obtained by The Texas Tribune shows funding would be maintained for the anti-abortion program, but reduced for doctors and clinics that provide reduced-cost contraception and health screenings. The document acknowledges fewer people would receive those services as a result.

Advocates say the cuts are penny-wise, pound-foolish, pointing to a health commission finding that the programs saved Texas an estimated $19.6 million in a year by averting births with contraception and family planning. (The programs don’t cover abortions.)

Critics of the cuts fear they will destabilize providers already operating with thin margins and undo years of rebuilding efforts for women’s health programs after a drastic funding cut in 2011 led dozens of clinics to close.

Kami Geoffray, CEO of Every Body Texas, said the programs identified for cuts “have been shown to improve health outcomes — including maternal health outcomes, which have been a challenge in our state.”

“It’s just really concerning that this is the area that is first to be targeted when the state is looking for cost savings because the reality is it’s going to be short-term cost savings,” said Geoffray, whose organization supports women’s health providers that contract with the state. “We’re going to have more costs down the road with increased STIs, increased cancer diagnoses that went too long because people weren’t able to get screened. We’re going to have unplanned pregnancies as a result of not being able to access the contraceptive care people want and need.”

The budget-slimming process has been driven by Abbott, Lt. Gov. Dan Patrick and House Speaker Dennis Bonnen, all Republicans, without public hearings or other formal venues for lawmaker input.

Bonnen said in a statement that the proposals are a “starting point for conversation” and that there will be a public hearing. Agencies were asked to identify cost savings in a manner that maintains crucial functions and “access to care without compromising our priority to protect the lives of the unborn,” he said.

“The financial implications of this pandemic are undeniable, and the state will be harshly impacted if we don’t take preventative measures now to avoid a more painful cure down the road,” he said. “It is unfortunate that pro-abortion lawmakers have opted to play personal politics during an economic crisis that has forced an unprecedented fiscal strain on our budget and the pockets of millions of Texans, and we should not be fooled by the false narrative they wish to create.”

Spokespeople for Abbott and Patrick did not respond to requests for comment.

Most of the state’s roughly $40 billion in annual health and human services spending is exempted from cuts, “given the importance of the state’s response to COVID-19 and the continuity of critical government functions,” the state’s top three officials wrote to agency heads in May.

But not all line items in the Texas health and human services budget were preserved. In total, Texas health officials came up with $15 million in direct cuts to programs, with a quarter of those coming from women’s health. In addition to family planning, the programs offer limited treatment for postpartum depression and screenings for sexually transmitted infections, cholesterol, diabetes, and breast and cervical cancer. The programs were expected to receive $182 million in the next fiscal year, making the proposed cut equivalent to about 2%.

Many of the health commission’s other suggested cuts, worth about $133 million in total, would come from hiring freezes and reducing other administrative costs, such as canceling travel to professional conferences, according to the budget proposal. About 915 full-time employee positions would be left unfilled across all health and human services agencies.

State officials stress the cuts are still evolving. But with the fiscal year ending in days, women’s health providers have not been told if their funding will be slashed and are unsure how to plan financially.

Christine Mann, a spokesperson for the Health and Human Services Commission, said in a statement the agency is “deeply committed to ensuring budget reductions have minimal impact on the Texans we serve every day. We’re equally mindful of the financial responsibility we have to Texas taxpayers as we face the economic challenges brought on by this pandemic.”

She did not answer detailed questions but confirmed that the agency’s proposal cuts funding for women’s health programs and not for Alternatives to Abortion, which was allocated $59.9 million in the 2020-21 budget, up from $38.3 million the biennium before and just $8 million 10 years ago. The program was earmarked to receive up to an extra $20 million this budget cycle, but it’s unclear if it has.

Modeled after a Pennsylvania anti-abortion program, Alternatives to Abortion, or A2A, discourages women from terminating their pregnancies and distributes children’s items like car seats and infant formula, among other services.

Detailed information about the program is hard to come by. The health commission’s 2019 annual report found it served 66,408 Texans but did not say what services they received. Unlike traditional women’s health programs, state law does not require extensive reporting on private contractors that provide anti-abortion counseling.

State Rep. Sarah Davis, R-Houston, said keeping the Alternatives to Abortion funding is “purely political,” and that the women’s health cuts don’t make sense if the goal is to advance a conservative budget.

“Every dollar you invest in women’s health, I think you save something like $3 in unintended Medicaid births” covered by the government, she said. “That doesn’t even take into account the fact that women aren’t going to be receiving care, like pap smears and breast exams.”

Why are health programs with “positive outcomes” being targeted for cuts over the growing “Alternatives to Abortion, which does not have metrics that indicate the same value for the dollar spent?” she asked.

Both said the budget cuts have advanced without lawmakers’ or the public’s input, and that the process has not been transparent.

The August budget document offers little detail about how the cuts will be distributed but indicates providers will see “reduced cost reimbursement for support services.”

Funding for these expenses pays for items like clinic supplies, staff training on procedures like inserting long-acting reversible contraceptives, and outreach efforts to let a community know what health options are available, Geoffray said. Clinics she works with say they have been told their two-year contracts with the state are being amended — leaving them uncertain how much they will be paid for September and October. They will receive new agreements starting this fall. Without guidance from the state, they may have to start cutting costs as a prophylactic — meaning fewer staff members, fewer open hours or fewer services.

“Once you’ve closed a clinic, it’s really hard to just pop it back up at some later date,” she said.

The backdrop of the pandemic makes it a particularly bad time for cuts as many people have lost access to employer-based health insurance and women in service-sector jobs have been hard hit, said Delgado, a former state health official.

Advocates and lawmakers fear the statewide budget reductions could have detrimental effects beyond women’s health. They are particularly alarmed by cuts that could reduce oversight of child care facilities, make it more difficult to sign families up for health insurance or food benefits, and reduce other services.

The health commission has said that “services directly impacting short-term mortality were prioritized over [long-term] health benefits” and that those with “limited impact on the direct health and well-being of Texans were prioritized last.” But its proposal acknowledges that hiring freezes and program cuts “would have a significant impact on the agency’s mission” and could risk the state running afoul of federal guidelines for quickly enrolling needy Texans in health programs.

Stephanie Rubin, CEO of the nonprofit Texans Care for Children, said the state already has the highest rate of uninsured people and “stark racial disparities in infant and maternal mortality.”

“We hope that during the next session the Legislature will fully fund the services that families need during the pandemic and use other tools, like federal relief funding and the rainy day fund, to deal with the state’s revenue shortfall,” she said.