Suspect charged with DWI in an accident with Kerrville PD officer 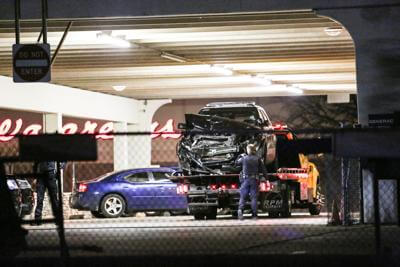 By Tammy Prout at the Hill Country Community Journal, Jan. 20, 2021

A Kerrville Police Department (KPD) officer was injured when his vehicle was involved in a head-on accident reportedly caused by an intoxicated driver Saturday evening at approximately 10:00 PM

According to KPD Public Information Officer Jonathan Lamb, the officer was traveling westbound in the 500 block of Water Street enroute to another call at the time of the accident.

“The officer observed a white Dodge Ram 3500 traveling eastbound on Water St. at a high rate of speed,” Lamb said. “As the truck approached the curve in the 500 block of Water St, it was traveling at such a high rate of speed, the driver, later identified as Daniel Ransom, 33, could not keep the truck in his lane. The truck crossed the center turn lane and went into the westbound lane, striking our officer’s patrol vehicle head on.”

Lamb said other officers in the area heard the crash and responded to the accident scene.

“There was extensive damage to the officer’s patrol unit,” Lamb said. “Ransom displayed symptoms of intoxication and following SFST, was arrested for DWI.”

Lamb said Ransom was also charged with Unlawful Carry of a Weapon for being in possession of a handgun while committing a DWI.

The KPD officer was treated and released from the hospital for the minor injuries he sustained in the crash, Lamb said.

“He is resting at home and we are all very grateful he wasn’t more seriously injured,” Lamb said.

Ransom was booked in the Kerr County Jail and was released on bonds totaling $2,000.