Sheriff, Leitha working together to prepare for new reign 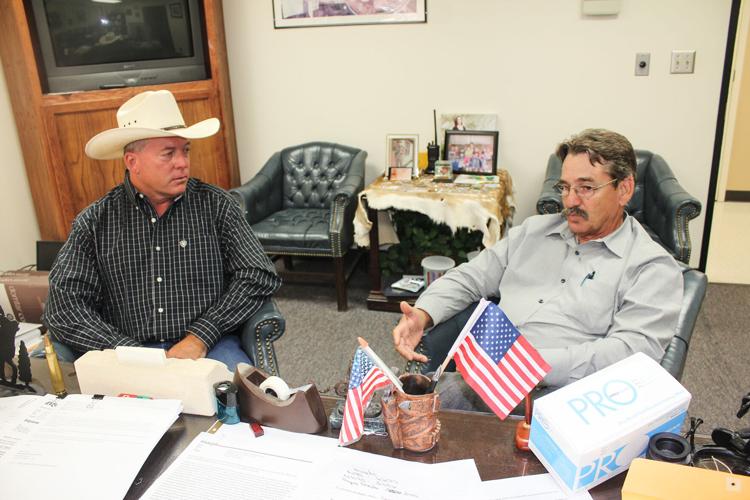 Hierholzer extended an invitation to all candidates prior to the March 3 primary to train and mentor the winner of the election. Leitha plans to take the sheriff up on that offer.

Leitha led with 72.90 percent of the vote after the early voting ballots were counted and finished the night with 62.11 percent at 4,394 total votes to Garcia’s 2,680.

“I talked to Larry (Leitha) on election night and congratulated him,” Hierholzer said. “I told him he is inheriting a whole bunch of very good people and I hope he can make those people and the county very proud.”

Hierholzer said he relayed to Leitha that his door was open to both Leitha and his selected chief deputy Chris Lalonde, who also a retired DPS officer.

“I would love to see him and his chief come in here,” Hierholzer said. “We will go through everything and make sure they are both ready on ‘Day 1.’ My chief deputy and I will work with Larry and his chief to make sure it’s a smooth transition. There’s a whole lot more to it than people realize.”

When asked what he would advise Leitha to do now that he has won the nomination, Hierholzer said he would suggest he get to know the employees and visit with each of the 116 of them.

“I’ve been the sheriff for 20 years, so none of these employees have had to worry about an election,” Hierholzer said. “There have been a lot of rumors and some of the employees are worried. If he asks me, I would tell him that’s the first thing he should address.”

Leitha appeared to be eager to learn only 14 hours after winning the runoff election, asking for a copy of the KCSO policy manual and peppering Hierholzer with questions.

On his selection for chief deputy, Leitha praised Lalonde’s experience and professionalism.

“I chose Chris because our many years of working together,” Leitha said. “I think we will make an excellent team. We bring two different skill sets to the table … Chris from uniform highway patrol service and me from the CID investigative side.”

Garcia congratulated Leitha on the win shortly after the July 14 results were posted.

“I congratulate Larry Leitha on his win,” Eli Garcia said. “We accept everything and respect the voters’ decision and will move forward. I especially thank my team who worked so hard. We will move forward from here.”

When early voting results were made available, Leitha was still doing campaign work.

“I was picking up signs at the mall when I got the early voting results,” Leitha said.

But even with a healthy lead early in the night, Leitha said he wasn’t ready to celebrate until the final numbers were in.

“On Super Tuesday in March, I was leading for three quarters of the night, but in the end I was edged into second place, so I wasn’t going to take anything for granted,” Leitha said. “During the primary election, there were five people running, so my goal was to just make the runoff and we did.”

Leitha said the extended campaign season has been difficult, but he is not ready to rest just yet.

“It’s been challenging, trying to navigate the COVID situation and how to campaign, but  we worked really hard,” Leitha said. “I’m really proud of our team.”

Leitha said he was proud to have the support of Kerr County Sheriff’s Office Capt. Carol Twiss, who narrowly missed out on being in the runoff herself.

“She worked very hard to support me and I really appreciate that,” Leitha said. “She didn’t have to do it. For now, we will take a short break and regroup and then we will resume our campaign again.”

While there is no Democratic candidate on the ballot in November, Leitha will face Libertarian Candidate Warren Funk in the General Election.

“We are not going to take anything for granted,” Leitha said. “This has been a 22-month campaign for us and it’s not over yet.”

“I don’t think I could support Mr. (Warren) Funk, based on some of his beliefs,” Hierholzer said. “But, I’ve always admired past presidents and how, at least many years ago, they always stayed out of their successor’s way. That’s what I’ve tried to do … allow the new sheriff to make this department his own.”

The General Election will be held Nov. 3. Hierholzer will complete his final term as sheriff on Dec. 31. The new sheriff will be sworn in on Jan. 1.