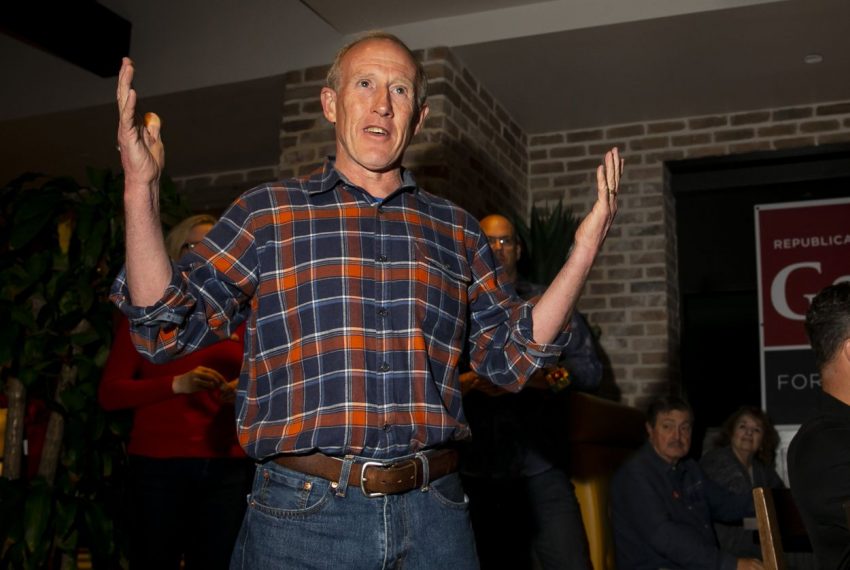 Gary Gates greets the crowd during his election night watch party at Gallery Furniture in Richmond on Tuesday.  Annie Mulligan for The Texas Tribune

Democrats had hoped the race would build momentum for their push to take control of the Texas House in November. The Houston-area contest garnered national attention and overshadowed two other special election runoffs for House districts Tuesday.

RICHMOND — Republican Gary Gates decisively beat Democrat Eliz Markowitz in the nationally targeted special election runoff for Texas House District 28, marking a disappointing loss for Democrats who had hoped to use the race to build momentum toward capturing control of the lower chamber in November.

With all vote centers reporting Tuesday night, Gates defeated Markowitz by 16 percentage points, 58% to 42%, according to unofficial results. Gates, a businessman who unsuccessfully ran for office several times before, jumped out to a similar lead after early voting and maintained it throughout the night. He will replace former state Rep. John Zerwas, R-Richmond, whose term doesn’t expire until January.

Gates claimed victory while addressing supporters around 9 p.m. at a Mexican restaurant.

“This was a race, as you know, it brought a lot of national attention, and they thought this was a seat they could flip,” he said, drawing shouts of “No way!” and “Don’t mess with Texas!”

Speaking to her backers about an hour earlier in Katy, an upbeat Markowitz rallied the crowd for the November general election.

“We’re not done,” Markowitz said. “Not only do we only have the early voting results in, but we get to do this all again in 11 months, y’all … Every single thing that we have done over the past six months will come to fruition in November 2020, and I hope that every single one of you will be standing by my side when we have a blue Fort Bend House District 28 in the future.”

Both Gates and Markowitz are also running for the full term that begins next year and will appear on the parties’ respective March 3 primary ballots. Markowitz is unopposed, while Gates faces minimal competition.

The special election runoff drew massive attention from Democrats. At least three presidential candidates got involved, national and state groups poured hundreds of thousands of dollars into the race, and Beto O’Rourke made it his top political priority since ending his White House bid in November.

Over 30,000 votes were cast, representing 20% of registered voters — an unusually high showing for a special election, which are known to have low voter turnout.

Gleeful Republicans said Gates’ resounding win showed Democrats had made a severe miscalculation. Gov. Greg Abbott said in a statement that Democrats “pulled out all the stops for this race” and “voters resoundingly rejected [their] socialist ideology and took a major step toward keeping Texas red.”

Democrats, meanwhile, pointed to the district’s Republican history, echoed Markowitz’s optimism about November and noted there are over a dozen seats higher on their target list than HD-28. The results from Tuesday night “don’t change the fact that there is a clear, competitive path to the majority for Democrats in the House this November,” said David Cohen, co-founder of Forward Majority, a national Democratic super PAC that spent over $400,000 in the special election.

No Democratic figure had gotten more involved in the runoff than O’Rourke, who spent back-to-back weekends stumping in the district. After appearing at Markowitz’s Election Night party, O’Rourke sought to buck up his followers during a Facebook Live broadcast while driving out of Houston.

The runoff “may not have turned out exactly the way we wanted [it] to, but I think what we did in preparation for this — the voter registration, the knocking on doors, the building the volunteer base, educating voters — all this is gonna continue to pay forward through November,” O’Rourke said. “And so keep your eyes on the prize.”

Even before Zerwas stepped down several months ago, Democrats eyed the seat as a pickup opportunity. He won reelection in 2018 by 8 percentage points, while O’Rourke came within 3 points of carrying the Fort Bend Countydistrict during his U.S. Senate run.

Gates loaned himself over $1.5 million while weathering attacks stemming from a 2000 child-abuse case. He had the support of Abbott once he advanced to the runoff, and other statewide officials jumped in as early voting began last week.

Markowitz and Gates were the top two finishers in the November special election, earning 39% and 28%, respectively. Markowitz was the sole Democratic candidate, while Gates faced five other Republicans.

There were two other special election runoffs Tuesday to fill state House seats, both in much safer territories for Democrats. With all voting centers reporting in House District 100, Lorraine Birabil defeated fellow Democrat James Armstrong with 66% of the vote to replace former Rep. Eric Johnson, D-Dallas, who vacated the seat last year to become the city’s mayor. Meanwhile, in House District 148, Democrat Anna Eastman prevailed with 65% of the vote against Republican Luis LaRotta for the seat of former Rep. Jessica Farrar, D-Houston, who resigned several months ago.

While the two other runoffs were overshadowed by HD-28, they did feature interesting storylines. Birabil, a former Democratic staffer, had a rare endorsement by O’Rourke in an intraparty race, while Armstrong, a pastor, received significant funding from Texans for Lawsuit Reform, the influential tort reform group that is better known for supporting Republicans.

Eastman, a former Houston school board member, worked to consolidate her party’s support after facing 11 other Democrats in the first round, some of whom now await her in the March primary for the full term. LaRotta, meanwhile, had Abbott’s endorsement and was hoping to pull off an upset in the solidly Democratic district.

Disclosure: Texans for Lawsuit Reform has been a financial supporter of The Texas Tribune, a nonprofit, nonpartisan news organization that is funded in part by donations from members, foundations and corporate sponsors. Financial supporters play no role in the Tribune’s journalism. Find a complete list of them here.

Obituary: Karolen Baugh - PateTeaching kids how to make guitars can get them hooked on engineering