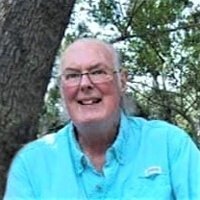 Larry Allan McCaleb of Leakey, Texas passed away Wednesday, June 12, 2019 at his home surrounded by his loving family. He was born in Uvalde, Texas on August 31, 1947 to Leo V. McCaleb Jr. and Ouida G. Holmes McCaleb.

Larry was a beloved husband, father, grandfather, son, and brother. He loved teaching his sons and grandchildren how to hunt and play in the Frio. Larry was born and raised in Uvalde, Texas but came to Leakey as often as possible to spend time with his grandparents. He retired to Leakey and with his sister Joyce he fulfilled a childhood dream of running the family business Camp Live Oak.

Other family members left to honor and cherish his memory are his sister Joyce Weston and husband Butch of Leakey, Texas; sister and brother-in-law’s Helen and Roger Simecek of Canyon Lake, Texas, Mary and Phillip Rodriquez of Whitney, Patricia Riggs of Converse, Roberta and Ronny Fowler of Schertz; brother and sister-in-law James and Jean Riggs Jr. of Schertz; numerous nieces and nephews.

The family request in lieu of flowers, please send donations to the Leakey EMS, P.O. Box 803, Leakey, Texas 78873 or charity of your choice.

Arrangements are under the personal care of Nelson Funeral Home of Leakey, Texas.