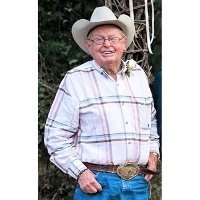 Garland Jadee Varga (Gaga), 85, of Rocksprings, Texas was called home on June 21, 2019 to be with his Lord and Savior. He was born on September 5, 1933 in Del Rio, Texas to JD and Rosemary Varga. Garland Varga lived his entire life in Rocksprings.

Garland met the love of his life, Sherry Quinn of Little Rock, Arkansas, at a Bob Wills dance in Kerrville. Garland and Sherry raised their two children, Todd Varga and Traci Varga Meeks, in Rocksprings. Garland was well known for his love of Bob Wills music and was loved by all the children of Rocksprings who were always telling him, “Hey, Gaga,” wherever they saw him.

Garland is survived by his wife of 62 years, Sherry Quinn Varga, son Todd Varga and wife Irene Varga and daughter Traci Meeks and husband Paul Meeks, all of Rocksprings, Texas.

He was preceded in death by brother Glynn Varga and parents JD and Rosemary Varga.

Arrangements are under the personal care of Nelson Funeral Home, Rocksprings, Texas.