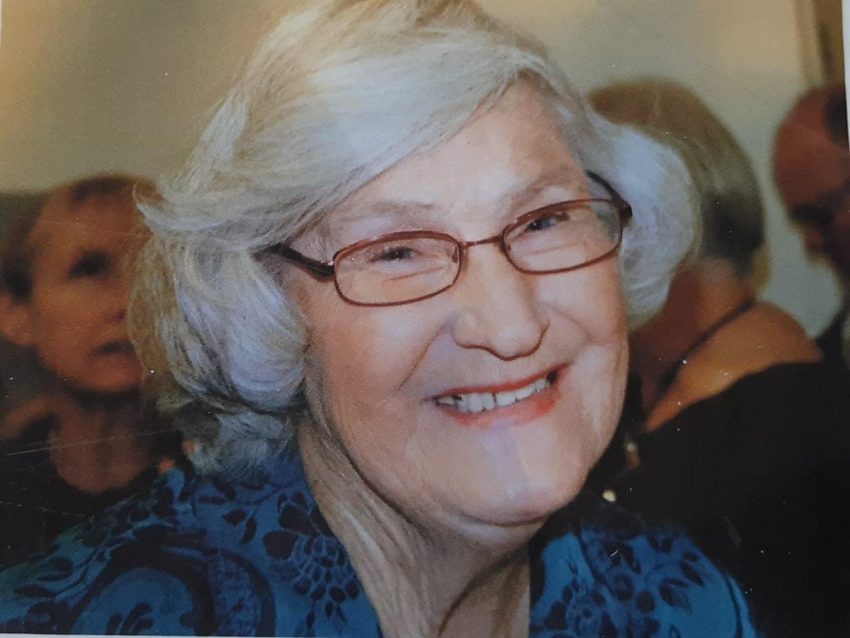 BEVERLY DIANE CHAMBERS FOSHEE, 11/26/1935 – 10/09/2019
An active member of Friends of Garner and both Leakey and Galena Park UMC, she is survived by her children Dirk Foshee and Carlyn Foshee Chatfield and husband Mark, former daughter-in-law Leah Foshee Braden, granddaughters Marie and Beverly Chatfield, brother Jimmy Chambers and  wife Janice, sister Sandra Gallamore and husband Reggie, brother-in-law Robert Foshee and wife  Lyndel, sister-in-law Diana Foshee, and many cousins, nieces, and nephews. She was preceded in death by her husband, George, and by her parents, George and Marie Chambers.  Her memorial service will be held at Leakey UMC 2pm Saturday, 10/19/2019. A longer celebration of her life will be held at Garner State Park during the January Trail Day work weekend.

Diane married her high school sweetheart, George, and they celebrated more than 54 years of marriage. They taught each other to two-step, waltz and polka and their smooth style was famous at the Garner State Park dances, where George always wore a white cowboy hat and pointy-toed boots, and Diane was in a swinging cowgirl skirt with matching Ropers.

When not at Garner, Diane was teaching the Kindergarten Sunday School class, sewing clothes for her family, mowing the yard, working in her garden, making kolaches, pies and cakes, and generally surrounding her family and friends with acts of love.  When George joined the Army several months after their marriage, Diane moved back home and worked at the new Prudential Insurance Company office as a keypunch operator. Later, she would take the same amount of pride in working as the
landscaper (and chief mower) for Galena Park City Hall.

When George returned from his Army tour, Diane persuaded him to chaperone junior high and high school community dances with her for 15 years. At Galena Park UMC, she and George served as church youth counselors for 9 years. Diane taught the Kindergarten Sunday School class for over 25 years, but her passion was Vacation Bible School and she came up with creative ways for her students to experience Bible stories, which often required a long walk to explore the upper room or a fisherman’s boat, or come across a man laying on the side of the road and requiring the attention of a Good Samaritan.

Diane shared George’s enthusiasm for football and often went to the games he officiated. They attended a Notre Dame football game for their honeymoon and again for their 50th anniversary. For about 10 years, she worked a part-time job as the Houston SFOA chapter secretary, assigning hundreds of officials to football games across the Houston area each week of football season.

She loved horses from a young age and carried that dream into adulthood where she involved her children in 4H and granddaughters in the Real County Junior Horse Club. Diane and George also bred and raised Appaloosa horses. She took it so seriously that she completed several weekend short courses on horse breeding and health at Texas A&M, and learned to judge horses. To practice judging and to check out their competition, Diane spent many days at the horse shows of the Houston Livestock Show. The horses were her primary interest and one of the only actual rodeos she saw was Charley Pride giving his final HLSR performance in 2002 as part of the “Legends of RODEOHOUSTON in Concert” with Kenny Rogers, Mac Davis, Larry Gatlin, Naomi Judd.

Diane also planned fun parties for her children and their friends, and not just on birthdays. Her iced cookies shaped like turkeys, pumpkins and valentines for various Room Mothers’ parties in Carlyn’s and
Dirk’s classrooms were a hit. The Christmas versions found new generation of appreciation when she started taking them to the Friends of Garner open house on the Friday after Thanksgiving each year.
She threw a Go Western children’s party in their Galena Park barn (garage), and organized swimming pool parties at the ARCO recreation club. To economize, she served chalupas because beans were cheaper than hot dogs –but the guests all raved about the fancy food at Mrs. Foshee’s parties!
She was also known for her popcorn balls at Halloween. She popped fresh corn in a heavy iron skillet, poured a hot sugar syrup over the corn and quickly shaped it into balls, and wrapped them in waxed
paper. They were in such demand, that parents who had loved them as a kid accompanied their own children to Mrs. Foshee’s house hoping she would have enough to share with adults. One Halloween, she made 300 popcorn balls.

In 1998, Diane and George retired and bought a ranch in Leakey, and she was delighted to join her neighbor in a new Bible study group. No Tuesday morning was complete without the Church of Christ ladies’ insightful lessons. Of course, Tuesday mornings started out with her Emmaus group breakfast, and she squeezed in a Garden Club meeting as well. Diane filled every moment with things she loved to do!

Many of her favorite activities involved Garner State Park – from hiking the trails and floating the river to dancing at the Pavilion in the evenings. She and George were dismayed with the hiking trails built by the CCC boys began falling into disrepair after 50 years, so they began reclaiming the trails in 1990. Their efforts grew to include other Garner fans and the Friends of Garner started organizing annual trail work days on MLK weekend. With well-marked boundaries and ever-evolving trail maps, novice and experienced hikers alike now enjoy exploring the Garner hills.

Arrangements are under the personal care of Nelson Funeral Home of Leakey, Texas. The family invites you to leave a condolence at www.nelsonfuneralhomes.net