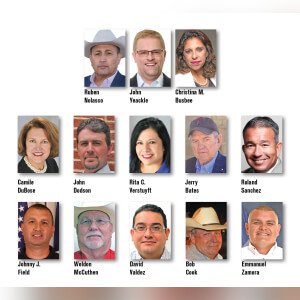 Uvalde County elected officials will be sworn into office in ceremonies to be held at 12:01 a.m. on Friday, Jan. 1, 2021, on the east side steps of the Uvalde County Courthouse.

The event, which will be open to the public, will observe COVID-19 pandemic precautions.

Incumbent Uvalde County Tax Assessor Collector Rita C. Verstuyft will be sworn in, as will incoming Uvalde County Sheriff Ruben Nolasco. Former Sheriff Charles Mendeke will be retiring on Dec. 31 after holding the position for 12 years.

Incumbent John Dodson will take the oath of office as Uvalde County Attorney; Border Prosecutor Christina Busbee will be sworn-in as the new 38th Judicial District attorney and sitting District Judge Camile G. DuBose will renew her oath of office.

Five constables will be sworn in during the ceremony, including three incumbents: Pct. 1 Constable Johnny J. Field; Pct. 2 Constable Weldon McCutchen; and Pct. 4 Constable David Valdez. For Pct. 3, Bob Cook who defeated incumbent Jim Mangum will take the oath of office, and for Pct. 6, Emmanuel Zamora, who triumphed over incumbent Robert Moss, will be sworn in to office.

Roland Sanchez, appointed Dec. 14 by Uvalde County Commissioners to take the place of Ernest “Neto” Luna, who resigned in early December, will take the oath of office as Pct. 6 Justice of the Peace.

Deputy sheriff and court bailiff Fred Ratliff will call the ceremony to order, and the Rev. Eduardo D. Morales of Sacred Heart Catholic Church will give the invocation and the benediction.