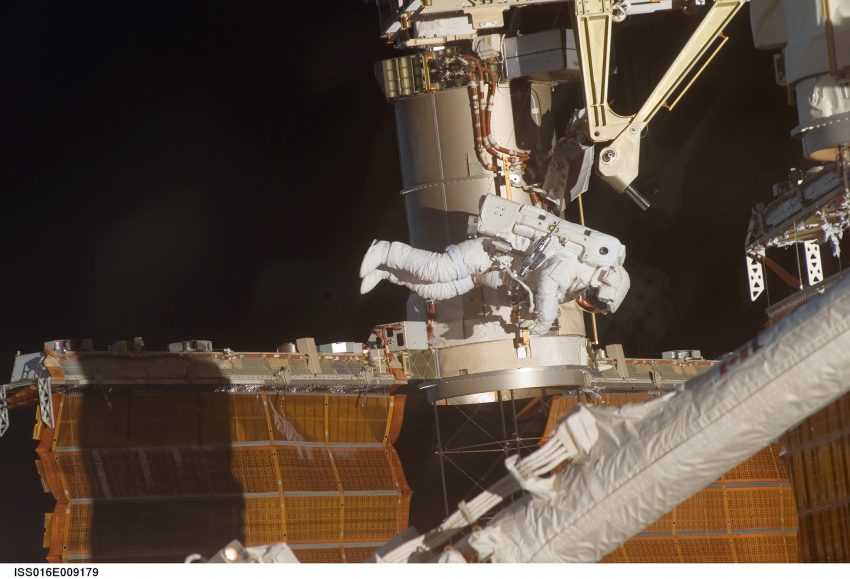 By Joy Diaz & Terri Langford at the Texas Standard, November 2, 2020

This audio player includes an extended version of the interview heard on Texas Standard.

NASA is celebrating a milestone this week. For 20 years, humans have been continuously working and living on the orbiting laboratory called the International Space Station, or ISS.

Ret. Army Col. Douglas H. Wheelock, a former astronaut, recalled for the Standard what it’s like to have the longest work commute, not to mention a workplace suspended in outer space.

“I was just mesmerized by the size of it,” Wheelock said of his two stints on the ISS. “You know, it’s just amazing. I thought what an incredible feat to build this orbiting castle in the sky.”

Technically, the entire International Space Station is larger than a football field. “Of course, a lot of that structure is the backbone or the truss segment with the solar arrays on it,” Wheelock said. “And then, the habitable part of it, it’s quite large. It’s like being in a four bedroom home or something like that.”

Working on the space station is for the most part, a surreal experience.

All that orbiting means temperatures outside fluctuate wildly, some 500 degrees.

“Inside it doesn’t really affect you so much with temperature,” Wheelock said.

But outside, in the direct sunlight, it’s about 275 to 300-degrees Fahrenheit. When the space station goes into shadow, that temperature drops to about 300 degrees below zero.

“So in 45 minutes, we have about a five to six hundred degree temperature change,” he said.

Wheelock said he had one scary moment when he was in shadow while repairing the space station’s solar array for more than seven hours.

“I started shivering and getting really cold and I really kind of had a little mini panic attack,” he said. “I was so scared that I wasn’t going to be able to close my hands to be able to grab onto things.”

Wheelock was able to shimmy up to the side of the space station where there was a sliver of sunlight on a piece of metal about 10 feet above his head. He placed his hands in the direction of that sunlight sliver to warm them.

“I was glad that I was able to warm my hands up and get back inside,” he said.

Wheelock said he knows there’s a lot of talk about going to Mars but he hopes that what is learned from space station research will help all of us take better care of the world we have now.